When One, Two, or even Three are Not Enough!

My offerings today and the next two Sundays will feature Johann Sebastian Bach’s Concertos for 2, 3, and 4 Harpsichords, BWV 1060–1065, works that, whether in minor or major, convey unsurpassed vitality. Bach composed these pieces afresh or adapted them, either from his own earlier works, likely written during his period as Capelmeister at the Princely Court of Cöthen, or from the works of other composers like Antonio Vivaldi. The final versions stem from during his later years in Leipzig, when, as Georg Philipp Telemann’s heir to the position of Director of the Collegium Musicum, Bach became involved with the regular popular concerts at Gottfried Zimmermann’s fashionable Coffee House on the posh Catherstraße; located just to the right of the centerfold, next to the Military Governor’s Palace).  In the summer months, they moved to Zimmermann’s Gardens, set in the scenic countryside just outside the Grimma Gate; the gate is at the top of the city plan. These weekly Friday-evening events were enjoyable, almost festive occasions, yet serious too, held outside the coffee house’s normal hours. Zimmermann requested no rent and the audience entered free of charge – the profit was in the coffee, still a rare and exotic delicacy. 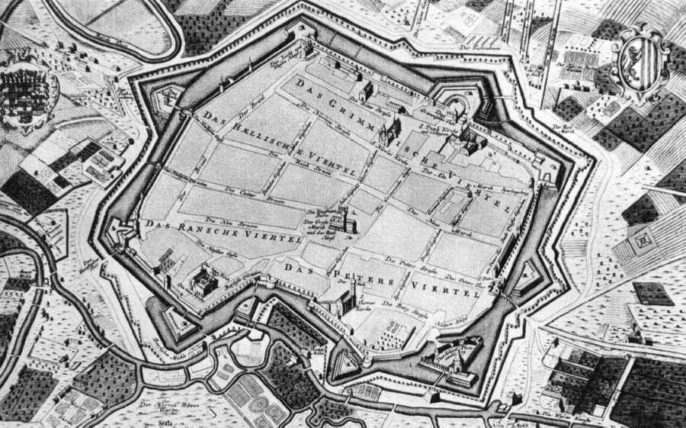 (To orient you on the City Plan, the Thomaskirche is at the bottom center, in the “Peiters Viertel,” the Town Hall and Market Place are near the center of town, and the Nikolaikirche, Bach’s principal church, is near the center top, in the “Grimmische Viertel”. Bach lived next to the Thomaskirche, in the Thomasschule, which also housed the choir boys; he and his family entered through the door on the left, in 1723, before the old building’s much-needed renovation, and, after the renovation, with its new facade and the addition of two upper stories and three attic levels]. Bach’s study was located on the third floor, on the backside of the building, with a lovely view overlooking the garden promenade outside the Thomas Gate, which adjoined the school.) 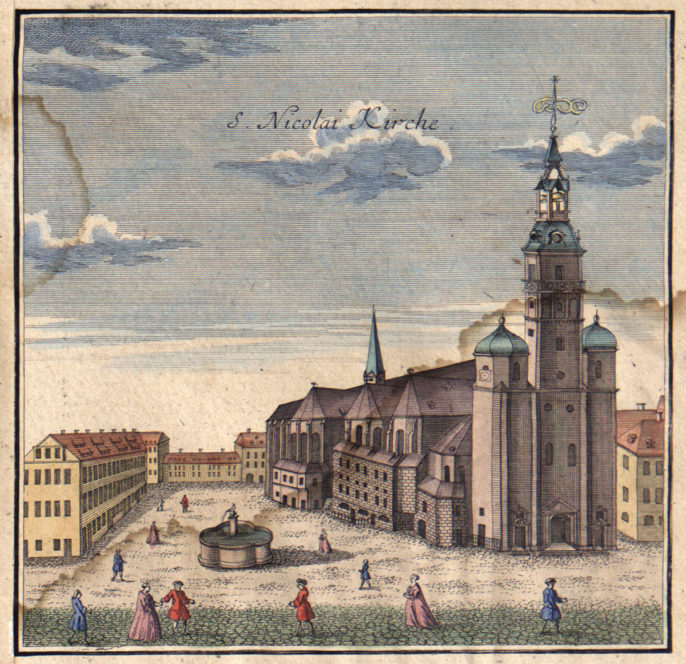 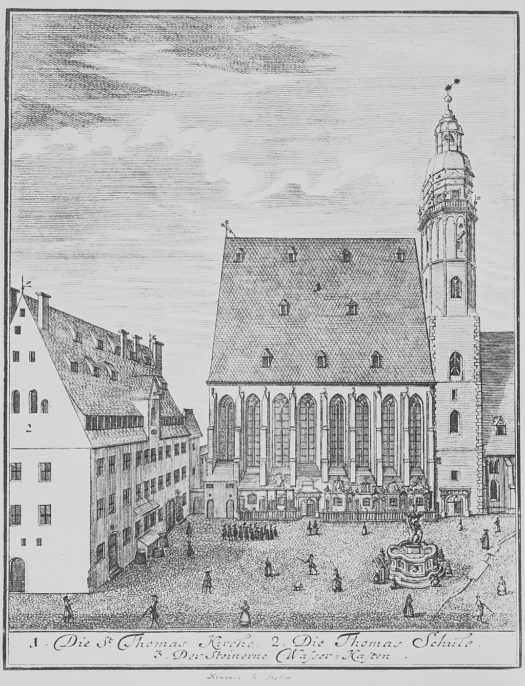 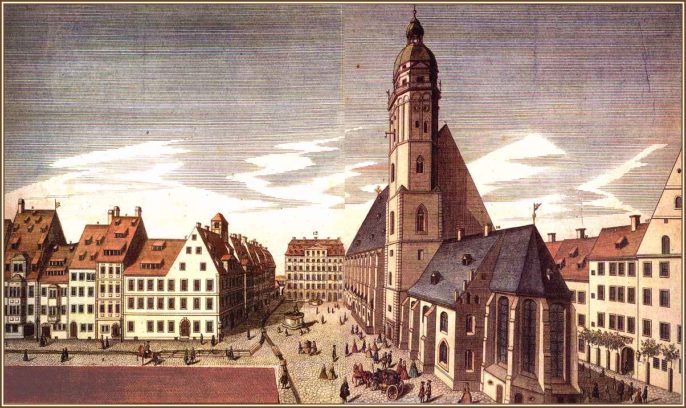 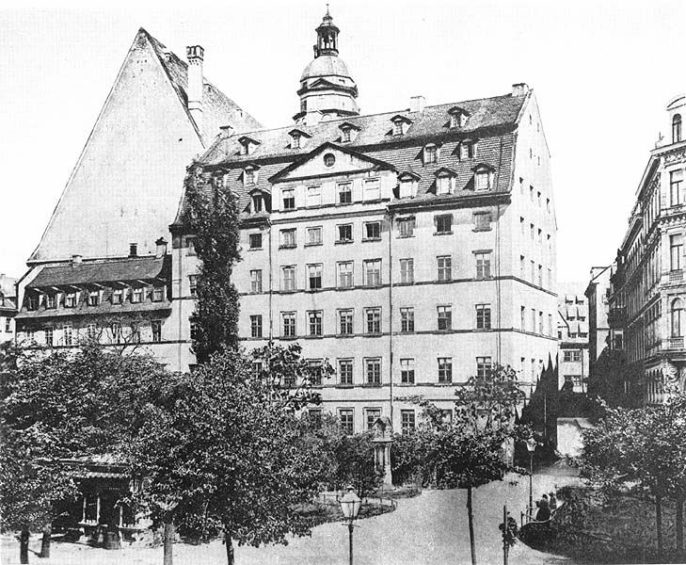 We have three concertos for two harpsichords and strings, two of which appear to be arrangements of earlier works for other forces. We’ll listen to two of them today, designated BWV 1060 and 1061 in Wolfgang Schmieder Catalogue of Bach’s Works (1950).

CONCERTO for Two Harpsichords and Strings in C minor, BWV 1060

The first and last movements of this jolly-minor concerto are in ritornello form, whereby the opening musical gestures return over and over again, like pillars, throughout the movement, lending great cohesion to the proceedings. In between, the harpsichords emerge from the full texture (the tutti) to play their solo passages, only to rejoin the tutti until their next solo appearances.  (In Romantic concertos, the soloists remained silent during the opening tutti sections, appearing on their own when the tutti backs away. In Bach’s concertos, the keyboard soloists play along with the tutti.)  The ritornello appears in the home key to launch the piece and again to close it. During the rest of the movement, the ritornello appears in a variety of keys, usually reached by passages that modulate to the next key via stepwise Vivaldian sequences.

In the first bar the initial sighing gesture is immediately varied with the addition of sixteenth notes that push us forward to a cadential variant, ending in a large sigh. This distinctive set of gestures is easy for us to discern throughout the rest of the movement and as such is always greeted with pleasure.

The lovely second movement, based on a cantabile melody in 12/8 time and in the contrasting dominant major key (G major), is a lyrical Siciliano evoking a pastoral mood. (In contrast, the Sicilianos composed by Alessandro Scarlatti for his operas were typically lamenting, melancholic arias in minor keys.) Forward motion is achieved by an anacrusis (“pickup”) motive embedded within the lyrical theme and consisting of five sixteenth-notes that lean forward to a stable quarter note.  One marvels at how Bach never exhausts the variety of ways in which he deploys this motive: as solos; in imitation between the hands and between the two soloists; in duets in parallel and contrary motion; and with all sorts of combinations of these. At a point, the two harpsichordists in the Pinnock-Gilbert recording, no longer content to adhere to the written page, begin to add elegant arabesques of their own invention, as Baroque players were expected to do. A poignant moment occurs when the strings abandon their off-beat pizzicato accompaniment to sustain long notes, in a style not unlike the accompanied recitatives when Christ sings in Bach’s passions.

The leaping violinistic figure that opens the final movement immediately captures our attention and is readily recalled each time it appears in its numerous solo and ritornello entries.

Scholars have speculated since 1886 that this concerto is a transcription by Bach of a lost concerto, in the same key, for violin and oboe, mentioned in a 1764 Breitkopf catalogue. That version has been reconstructed by Max Sieffert (1920), Max Schneider (1924), and, for the New Bach Edition, Wilfried Fischer (1970).

To follow a scrolling score – soloists on the left, orchestra on the right – see the recording by Trevor Pinnock and Kenneth Gilbert with the English Concert (Archiv label):

For a bit more jolly performance, see the one by Christophe Rousset and Christopher Hogwood with The Academy of Ancient Music:

For the version with oboe and violin, see the live performance by Emma Black and Shunske Sato for The Netherlands Bach Society’s All of Bach project:

CONCERTO for Two Harpsichords and Strings in C major BWV 1061

So constantly busy are the two harpsichordists in this Concerto that little is left for the strings to do, other than punctuate the starts and cadences of ritornellos, and even there they double the soloists exactly, apart from the odd independent motif. This unique unbalance has led to speculation that perhaps Bach’s eldest son, Wilhelm Friedemann, added the spartan string parts to a composition by his father for harpsichords alone. (The sole manuscript from the Bach circle, written by the composer’s wife, Anna Magdelena, with corrections by Bach himself, is for just the two harpsichords [BWV 1061a]. The manuscript with strings dates from the second half of the 18th century.) Bach also composed a concerto for harpsichord alone, the popular Italian Concerto, BWV 971.

The first movement, which opens with the launch of an elegant yet powerful rising dotted-rhythm figure, is a perpetual motion machine, with the soloists constantly vying for supremacy as they bounce the rising motive back and forth in tight imitation, in what at times sounds like a cat fight!

The flowing slow movement, in 6/8 time and A minor, evokes the Siciliano, with all the descending sixteenth-notes adding a touch of melancholy. The finale is a rip-roaring fugue in which the strings play the more important role of crowning the pileup of fugal keyboard entries with its own, to create a great climax. But this sort of intervention happens only rarely, and otherwise, except for some punctuating pitches, the strings stay out of the fray.

We’ll listen to the performance by Francesco Corti and Siebre Henstra, with the Netherlands Bach Society.

You might enjoy starting with the players’ discussion on preparing this virtuosic work:
https://www.youtube.com/watch?v=iQkz8D5MW-o

Their live (and lively!) performance is at:
https://www.youtube.com/watch?v=wRtOLw8rERo