The Stile antico and Stile moderno in Sacred Music

Today I’d like to share with you four pieces of sacred music, one in the Stile antico or Prima prattica of the High Renaissance, two that reflect the new style of composition—the Stile moderno or Seconda prattica—at the beginning of the 17th century, that is, at the start of the period we refer to as the Baroque, and one work from early 17th-century Germany in Italian madrigal style.

The proponents of the new styles believed that the words dictated the music, and therefore that the emotion of the text could justify a level of harmonic dissonance unknown in Renaissance sacred music.

As a point of reference, here’s what sacred music sounded like at the end of the previous century, during  the High Renaissance.  The work is by Spain’s pre-eminent composer, Tomás Luis de Victoria (ca. 1548–1611.

Note the well-controlled polyphonic entries of the four voices, the little melismatic embellishments on the word “eleison,” and the rapid resolution of each slight moment of dissonance—all of these features creating a warm, secure, otherworldly sacred realm.  In the initial Kyrie, the voices enter S–A–T–B, for contrast in the Christe, reversed as B–T–A–S, and then in the second Kyrie, interlocking T–S–A–B with more rapid entrances.

Even the radical Claudio Monteverdi (1567–1643) could write in this style, when the occasion demanded, as when he aspired to take up employment with Pope Paul V in Rome in 1610.  Here is the Kyrie from his six-voice Missa In illo tempore, which he dedicated to the Pope, using motives from a mass of the same name by the late Franco-Flemish composer Nicolas Gombert and creating a brilliant display of every technique in the art of counterpoint: 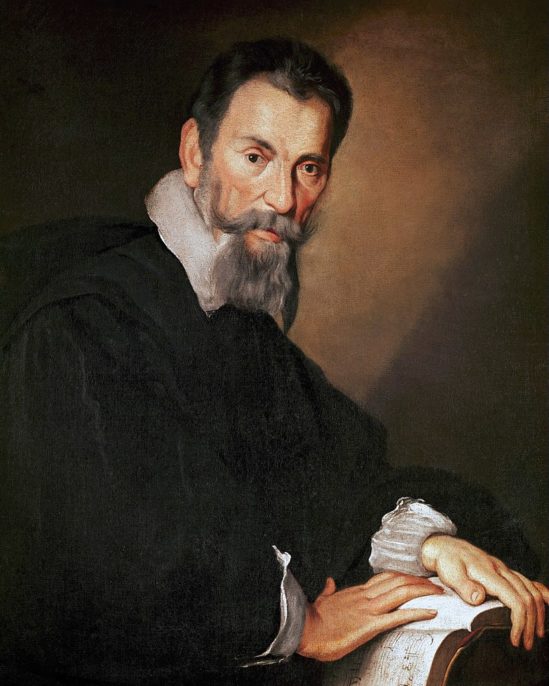 Kyrie eleison from the Missa In illo tempore
Performed by the Ensemble Vocal Européen, conducted by Philippe Herreweghe
https://www.youtube.com/watch?v=FZ0uk5H69Ng

You’ll note, though, the dissonances in the Christe eleison and the faster-moving rhythms in the second Kyrie eleison. The Gloria (with its greater length of text to cover) sounds rather like a secular madrigal, and it was not a big step to the other more modern works that Monteverdi sent to Pope Paul, the set of motets entitle Vespro della Beata Vergine (Vespers for the Blessed Virgin)—works that we may refer to as sacred madrigals.

A goal of madrigals—in addition to being fun to sing—was to create musical equivalents for keywords in the poem, so-called madrigalisms. Renaissance madrigals were polyphonic, though they could include homophonic passages. With the rise of opera in the early 17th century, solo singers were accompanied by an ensemble of instruments, including a basso continuo group to play the bass line and improvise on the given harmonies—at least one melodic bass instrument (violoncello, violone, bassoon) and one harmonic instrument (harpsichord, guitar, harp, organ).  Secular madrigals were composed in the same style, usually setting poems of love. How appropriate that Monteverdi should adopt this new style when setting the sacred text “Pulchra es,” a love song from Solomon’s Song of Songs.

Note the sudden harmonic shift at “avert our eyes” and how the singers “flee away” on rapid extended melismas.  These final phrases of music are so engaging that Monteverdi repeats them.

Monteverdi had hoped that the two works of 1610—the Mass and the Vespers—would be his “ticket out of Mantua,” where he had become disillusioned due to the ungenerous way the Duke treated him, aggravated by the Duke’s favorite singers and artists being paid more than Monteverdi. As Jan de Winne has noted, these two compositions represented “a kind of visiting card in which Monteverdi evinced the full range of his learning and his mastery in the field of religious music—on the one hand, the Mass, written in the old style, or prima prattica, a direct inheritance from the Renaissance, and, on the other hand, the Vespers, a masterpiece in the new style . . . of the early Baroque era,” or second prattica.

But Monteverdi’s hope of a position in Rome was not fulfilled, and he had to remain at Mantua, until the Duke’s brother Francesco succeeded him and dismissed both Monteverdi and his brother Giulio Cesare, due to court intrigues and cost-cutting measures. Claudio and Giulio returned, almost penniless, to their hometown of Cremona. In 1613 Monteverdi successfully auditioned for the post of maestro at the basilicas of San Marco in Venice. Hard luck continued to plague him: on his trip back to Cremona after his audition, he was robbed by highwaymen of the 50 ducats he had received to cover his travel expenses, together with all his other belongings!

Composers north of the Alps took note of the latest trends in Italy.  A prolific composer, with over 500 individual pieces still surviving, Heinrich Schütz (1585–1672) made two trips to Venice, first in 1609–1612 to learn the Venetian polychoral (multiple-choir) style with Giovanni Gabrieli, and then in 1628–1629, to meet and study with Monteverdi.  Near the end of his first stay, at the age of twenty-six, he published his Il primo libro de madrigali (First Book of Madrigals), op. 1 (1611), a volume of nineteen secular pieces in Italian. The culmination of his second stay was marked by the publication in Venice of his first book of Symphoniae sacrae, twenty settings of biblical texts for voices and instruments in the style of the seconda pratica.

Heinrich Schutz’s setting of another of Solomon’s Song of Songs shows that he learned his lessons well from Monteverdi.  Note how the music for opening line permeates the rest of the piece, acting as a ritornello, between phrases of decorated recitative, and how the sweet pair of violins add to the pastoral quality, all anchored firmly over a basso continuo.

Johann Hermann Schein (1586–1630), who served as cantor at St. Thomas’s Church in Leipzig a hundred years before Johann Sebastian Bach held the position, never went to Italy.  But he studied the music of Giovanni Gabrieli and Monteverdi from afar and adapted the Italians’ styles to the German language.  Schein composed secular and sacred madrigals, as well as Venetian-style polychoral music and dance suites.  His setting of two famous verses from Psalm 126 reveals his artistry as a sacred madrigalist who makes vivid the emotion of each phrase of text through his music. 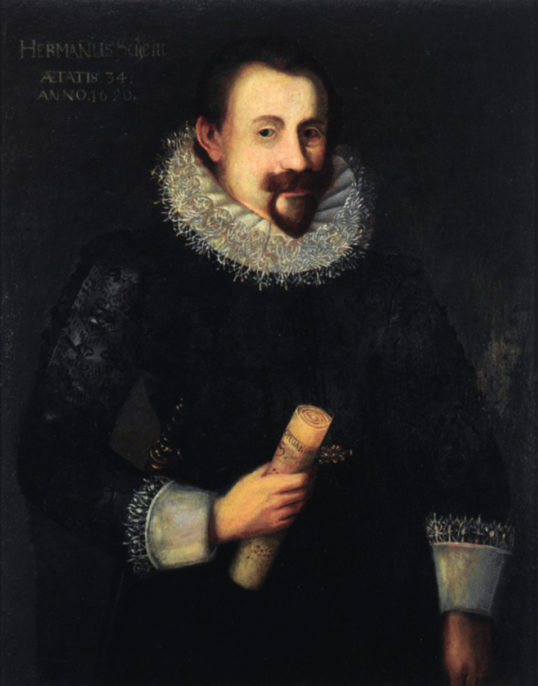 May those who sow in tears  –  Rising chromatic imitation
Reap with shouts of joy!  –  Joyful, dance-like
He that goeth forth weeping,  –  Rising line + dissonant harmonies
Bearing the seed for sowing,  –  Neutral setting
Shall come home with shouts of joy,  –  ¾, homophonic, cross-accents
Bringing his sheaves with him.  –  Climactic, slower tempo