The Sounding of Trumpets: Ritual, Signal, Warfare, and the Hunt in the Music of Early Brass Instruments 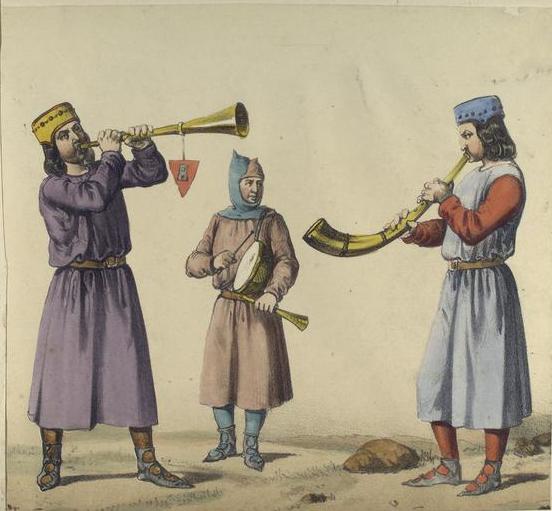 In his recent survey, Music: A Subversive History, Ted Gioia zeroes in on the origin point of all musical instruments. In a chapter titled “Carnivores at the Philharmonic”, Gioia explores early human music-making and attempts to understand musical instruments as products of the human material environment. “We cannot begin to grasp the first stirrings of human music without placing it within its ecosystem”, he writes, since “the instruments themselves began as part of the food chain.”[1]

Horn and hide, gut and bone: these were the ingredients of the first musical instruments, materials harvested from the spoils of the hunt. The bow, as Gioia points out, was a tool for such killings, as were, presumably, the ancestors of modern harps, early examples of which resemble bows with extra strings. Gioia argues that the control over sound which musical instruments offered allowed our human ancestors to frighten predators and enemies while controlling the movements of prey. Whether in warfare or the hunt, he argues, music’s origins have much to do with violence.

The instruments of today’s symphony orchestras retain little of their original materials – strings are made of steel instead of gut, horns are made of brass instead of ivory – yet the association between music and violence lives on. “Are we wrong,” asks Gioia, “to hear this history in the music itself, in the formidable aggression and awe-inspiring assertiveness of those monumental symphonies that remain the core repertoire of the world’s leading orchestras?” Of the many instrumental groups of Western concert music, it is the brass section which most lends a full orchestra this overwhelming, confrontational power, and it is also the inter-related family of brass instruments which have most clearly retained their associations with warfare and the hunt throughout the centuries. In music from Brahms to that of the Italian Trecento, the hunt has occupied a prominent place in Western music, and the corno da caccia, or hunting horn, has remained a fixation of composers for hundreds of years. 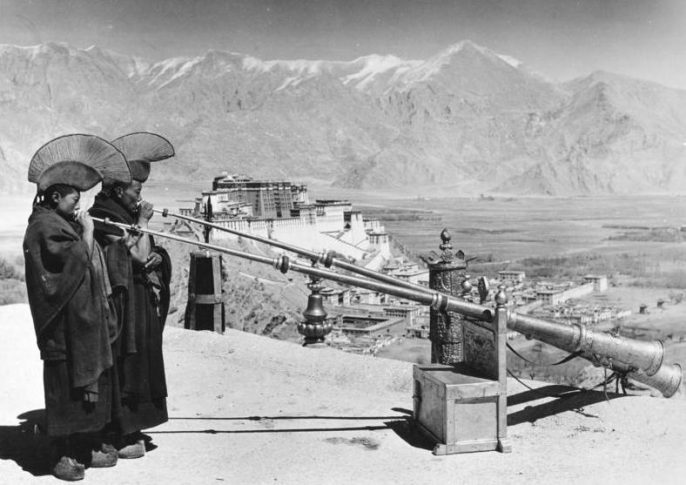 Tibetan monks playing the dungchen from a 1938 German expedition

The origins of lip-blown instruments like the trumpet, however, are incredibly diffuse. From Australian didgeridoos to the Tibetan dungchen to the Swiss alphorn, lip-blown instruments can be found across the world since before recorded history. The conch shell trumpet, for instance, was a staple of cultures throughout the Pacific Islands from a very early period. “As might be expected from an instrument that has been around since neolithic times” writes Margaret Sarkissian, “conch-shell trumpets are found almost everywhere, including inland areas like Tibet and Central Europe, where they prove the existence of early trade routes. Particularly common throughout Oceania, both end- and side-blown conch-shell trumpets were formerly associated with religious, ceremonial, military and signaling functions.” [2]

This bundle of associations seems to follow lip-blown instruments no matter the culture, time period, or material of construction. Far from the isolated islands of Polynesia, the Jewish shofar is a ram’s horn trumpet similar to the bugle in that it has no means of varying the pitch of the instrument besides the players embouchure. Still used today to mark ceremonial occasions such as Rosh Hashanah and Yom Kippur, the shofar is both a signal of sanctity and ritual and an integral part of bringing this atmosphere of timeless awe into being. Throughout the Old Testament, trumpets are associated with the power of God, and the shofar, too, participates in this lineage: in the book of Exodus, a shofar sounds from a thick, mysterious cloud on Mount Sinai, causing the Israelites to become overwhelmed with fear.

This association between lip-blown, trumpet-like instruments and power, status, and ceremony manifests itself differently in different regions and cultures, yet it often has a strongly gendered aspect. “Both the wooden ndumbu of south-eastern Angola and the giant bark buburé of the Amazonian rain forest,writes Sarkissian, “are hidden under water to keep them away from prying female eyes.”[3] In the case of the BaMbuti of Zaire, Sarkissian explains, “a trumpet called molimo is hidden in the forest until the village is afflicted by disaster and the world needs to be set to rights by means of a molimo ceremony.”[4] As in Angola and the Amazon, it is up to the men to gather up this hidden ritual instrument and to publicly set the ceremony in motion, a ceremony which women are forbidden to even witness. “Trumpets”, writes Sarkissian, “are frequently associated with regalia, signaling, and ritual, all of which mediate with the outside world in one form or another and thus fall into the public domain controlled, in most cultures, by men.”[5] 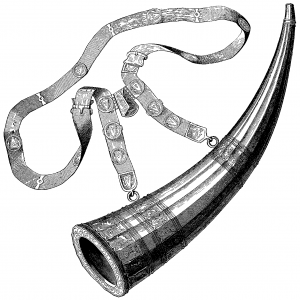 More familiar to the Western ear, metal, trumpet-style instruments have a long and storied history as symbols of power across the ancient world: Tutankhamun, the Egyptian boy-king from the second millennium B.C.E., was found, in 1922, to have been interred alongside bronze and silver trumpets. The Crusades, during which Europeans came in contact with the military trumpets of the Saracens world, are often cited as the origin point for a revival of interest in brass instruments throughout Europe. Yet much of the continued association between brass instruments and military signaling in Europe can be traced back to the use of trumpets and other lip-blown instruments by the Romans, who employed a complex military signaling system which utilized instruments like the tuba, a straight trumpet bearing only a passing resemblance to its contemporary namesake.

As scholar Kieth Polk points out, “the role of brass instruments in the Middle Ages… remains murky”, yet it is nevertheless clear that “throughout the time span, brass instruments maintained their associations with ritual and function.”[6] It is only in the late middle ages that one can see evidence of the trumpet assuming “an unquestionable central role in ritual music in Europe, becoming on the one hand a virtual aural trademark of high station, and on the other an essential component of any large-scale military operation.”[7] By the late fourteenth century, technological advances allowed metal workers to more skillfully bend brass tubing, allowing trumpets to take on new shapes and a new stability. Trumpet ensembles (around 1350 only a pair of long, straight trumpets) expanded to include fanfares blasted out by up to ten or twelve players. Players began to specialize in playing in the upper register in the 15th century, vastly expanding the trumpet’s range, and instruments like the slide trumpet and the cornett began to gain a foothold in ceremonial wind bands. Their repertoire, Polk explains, consisted of “dance tunes, items of a more local character, and many pieces from the international secular repertory”, yet in the early 15th century these bands were set distinctly apart from other instrumentalists, never crossing paths with strings or singers. This began to change in the late fifteenth century, when, for instance, trombone players began to be more commonly included alongside singers in sacred contexts.

It was in the Baroque and Classical periods that the horn in a form in which one would likely recognize it today enjoyed more widespread use in art music, and its association with the thrill of the chase was exploited by generations of composers. Thomas Hiebert points to numerous early examples of the horn being employed in fanfares for hunting scenes, including Michelangelo Rossi’s Erminia sul Giordano (Rome, 1633), Francesco Cavalli’s Le nozze di Teti e di Peleo (Venice, 1639) and Jean-Baptiste Lully’s La Princesse d’Elide (Versailles, 1664).[8] Even earlier, the hunt had embedded itself into European music in the form of the fourteenth century caccia (hunt), a musical form which consists mainly of two voices in a unison canon. “It is certainly possible”, writes Lucia Marchi, “that the audience of musical cacce was the same one that took part in court hunting; thus, the aural experience would have reminded the listeners of the actual hunt.”[9] This lineage and its metaphorical aspects (including resonances with the “chase” or the “hunt” of courtly love) formed part of the foundations for later references to the hunt in concert music.

It is only in the late seventeenth century that the larger cor de chasse (hunting horn), a French innovation, was introduced to the German-speaking world by Count Franz Anton Sporck (1662-1738) of Bohemia, who saw it in Paris around 1680. This was the instrument which became known in England as the French horn, and its expanded use in the early eighteenth century signaled the beginning of a change in the realm of brass instruments. The crude, single-key natural horns of the past began to be built with crooks, allowing for performance in several different keys. Hiebert, for instance, cites a 1713 article by Johann Mattheson, who “states that the horn had become very popular in ‘church, theatre, and chamber music’ precisely because it represented a different aesthetic from the trumpet.”[10] According to Hiebert, “Carlo Agostino Badia’s (1672-1738) opera Diana rappacificata (Vienna, 1700) contains the earliest known use of the horn as an integral member of the orchestra”[11], and by this time the transformation of lip-blown and early brass instruments from signals of violence and power to respected members of formalized concert music was nearing completion. Still, echoes of brass instrument’s origins as the repurposed spoils of the hunt continue to resonate to this day: one need think only of the raucous, assertive, domineering aspect of the natural horns employed in the Hungarian composer György Ligeti’s (1923 – 2006) Hamburg Concerto (which includes a section titled “Signale”) to see that the horn and, by extension, all brass instruments retain their age-old associations.

In different parts of the world, lip-blown instruments manifested themselves in a wide variety of different ways, from the horagai of Japanese Buddhist ritual and military signaling to the olifant, a medieval European hunting horn made from elephant tusk. Yet their association with the solemnity of ritualized power and formalized violence remained strong enough to transcend boundaries of culture, time, and space. Even today, militaries around the world employ brass instruments in military parades and signaling: as Gioia points out, “The United States supports 130 military bands, spending three times as much on military music as on the National Endowment for the Arts. This makes military music the single largest commitment to artistic performance in the entire government.”[12] 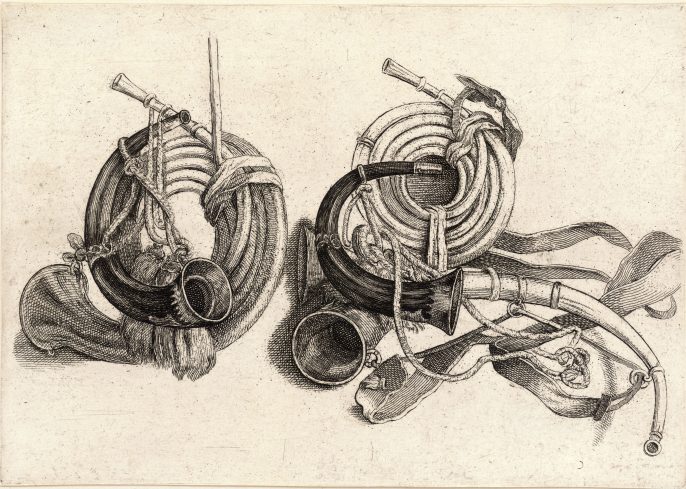 Still, it is well worth remembering that, despite their origins, the sound of lip-blown instruments such as the horn and the trumpet has no intrinsic relationship to the extra-musical contexts with which it is associated.  “Can a musical sound be ‘aggressive’?”, asks Sarkissian, “or is it the context in which sound is made and the way a listener chooses to interpret it?” Across cultures, fanfares and horn calls have served as declarations of power and markers of ceremonial occasions, yet these associations can and have been subverted. As Trevor Herbert and John Wallace write: “In the twentieth century, brass instruments have been prominent in both art and popular music. They have been used conservatively, radically, symbolically and, at times, trivially.”[13] At the forefront of this change has been Jazz, a musical style which, while at times partaking in the aggression and assertiveness traditionally associated with brass instruments, has also brought the delicate, melancholy trumpet stylings of Miles Davis and the celebratory joy of Louis Armstrong’s New Orleans big bands to a worldwide audience. By expanding the melodic and timbral repertoire of brass instruments, Jazz musicians have managed, not to erase the associations which these instruments have with violence and ritual, but to channel this angst and excitement into new emotional territory. While the fog of early human history and its many hunts retains its pull, then, the present day offers its own opportunities for renewal and reinvention.

An exploration of classical music’s enduring fascination with the hunt, from Renaissance caccias to baroque hunting horns and beyond.