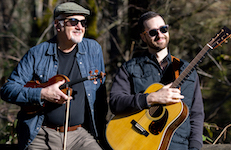 Randal Bays is an American born, Irish style fiddler who brings power and passion to the old tradition. He has devoted years to learning not just the tunes, but more importantly the feeling of Irish traditional music as handed down by the many great fiddlers and music lovers past and present. He renders the music with an intensity not commonly heard in any genre, powered by a deep love of the music, the culture, and a heartfelt wish to share this magnificent tradition with audiences. Randal has long had a special love for the traditional fiddle styles of Counties Clare and Galway. He has toured and recorded with many of the great Irish musicians of the day, including Martin Hayes, James Keane and Daithi Sproule (in the band Fingal), James Kelly, Michéal O’Domhnaill, and many more. He has a string of acclaimed independent recordings to his credit, including his most recent release “Up The West.”  Randal is also a noted teacher of Irish fiddling. He has taught at most of the major Irish music events in North America and is the Artistic Director of Cascadia Irish Music Week in Washington state. Randal is also famed as a fingerstyle guitarist. He recorded two seminal albums with Irish fiddler Martin Hayes in the early 90s (“Martin Hayes” and “Under the Moon”) and later contributed two tracks to the “Masters of the Irish Guitar” CD on Shanachie Records. In 2012 Randal released his first album of solo guitar work, “Oyster Light”.

“Bays is among the best Irish style fiddlers of his generation”. – Fiddler Magazine (US)

Guitarist Clint Dye is a fairly recent addition to the Seattle Irish music community. His great musicality, rhythm, and style have made him very welcome in sessions and concerts around the Northwest. Clint got his start playing traditional Irish music by accompanying step dancers and singers in the Busch Gardens show Celtic Fyre in Williamsburg, VA. During this time, he began to cut his teeth in Irish music sessions and work in small groups. He has appeared at numerous festivals and events on the east coast and since relocating to Seattle has worked with several local bands.