The Early Guitar and the Art of Categories

“A language is a dialect with an army and navy.”
— popularized by Max Weinreich 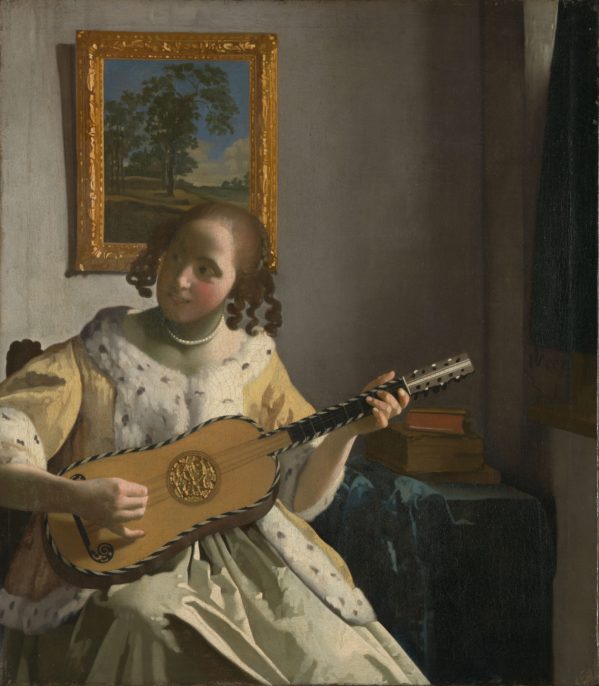 Writing history means investigating connections: between ideas and actions, between people and places, between scattered manuscripts and objects and archives of all kinds. These and other lines of inquiry help to build up a composite picture of the past that can be rather compelling, but which is never fully complete. There is always more to discover, and there are always new connections and distinctions to be made.

The history of musical instruments is also a history of connections, of techniques and diagrams and objects spreading and changing over time. Organology, the study of musical instruments and their categorization, is a science of distinctions and fine details. The pervasive Sachs-Hornbostel classification system, for example, divides musical instruments into categories such as aerophones, cordophones, idiophones, and membranophones based on how they work to produce sound. The classification system functions much like the taxonomic ranking system of organisms in biology, separating musical instruments from each other into different camps based on incrementally more obscure details of construction. Both of these classification projects speak to a pervasive human impulse to categorize, differentiate, and find patterns, a need to understand how things evolved and where they fit in.

Pareidolia is the perception of pattern or meaningful order where there is none. In a series of upcoming articles for Clef Notes, I’d like to take a few of the most common instruments in the world — the piano, the violin, and the flute, among others — and treat them as categories rather than fixed objects. That is, I’d like to treat terms like “piano” as containers that different people, in different places, and at different times have filled with all sorts of different meanings and connotations, investigating the connections and patterns that come about through looking at instruments not as individual objects but as points in a broader web of sound and life. By briefly sketching these early portraits of well-known instruments, I’d like to emphasize that music’s place in the world is always changing, and that conclusions about its uses, meanings, joys, and pitfalls can never be applied universally 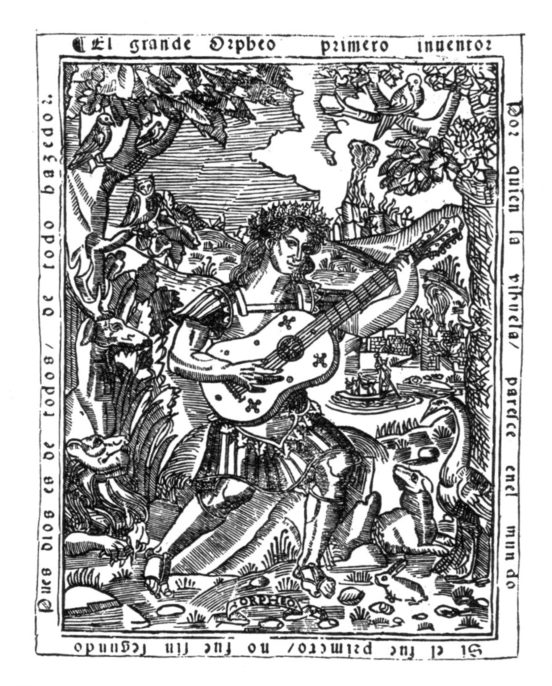 In investigating the guitar there is one rather obvious connection to be made: the guitar is a lot like the lute. In the grand scheme of things, the instrument which is usually thought of as the lute differs from the guitar largely in the shape of its resonator, which is bowl shaped rather flattened (never-mind the slight difference in tuning). In fact, there is a whole cloud of instruments, painstakingly categorized by Sachs and Hornbostel, which have been advanced as candidates for entrance into the guitar family tree: the vihuela, the gittern, the citole, and even the kithara, an ancient Greek lyre consisting of between three and twelve strings strung over a hollow wooden frame.

Simon Gorlier, a 16th century French printer, bookseller and musician, provides a first example of tenuous connections in the writing of history. In his preface to a collection of arrangements for guitar, he claims:

“The Ancients were satisfied with such instruments as the Guitar [Guiterne], which they called Tetrachordes because it had four strings. Not that I claim to prefer it to other instruments, but at   least, if merely in honor and memory of Antiquity, I wanted to show that it had its own limits for reproducing music in two or three voices or parts, as well as does a larger instrument.”[1]

So much for fine grain distinctions between cordophones. In Gorlier’s view, any four-course, plucked string instrument is, for all intents and purposes, a guitar. Gorlier is making a connection here (of the bold type one makes when historicizing publicly) which rests on the assumption that “The Ancients” categorized their instruments just as the musicians of 16th century Lyon did, projecting his own concept of the guitar backwards in time. Gorlier also uses the word guiterne in a radically different way than Sachs and Hornbostel, taking the word to mean, essentially, any small, four-course member of the lute family. The reasons behind Gorlier’s pareidolia are obvious and familiar: he is justifying his own work by connecting it to a glorious, imagined past. 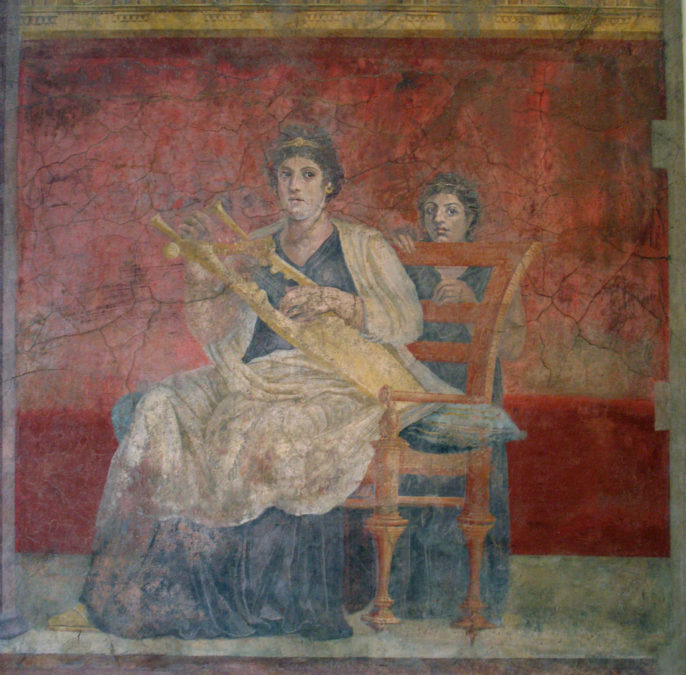 A Roman representation of a woman playing the cithara c. 40-30 BC

Gorlier was writing at a time in which the guitar was only just emerging out of a wide variety of plucked string instruments that had populated Europe for centuries. His insecurity about the guitar’s worth is evident, yet understandable given the fact that the guitar of his time was most often a small, high-pitched, instrument with two strings per course (for a total of eight gut strings) that was seen, in France, as a novelty next to the more well established and venerable lute. The two strings of each course were tuned to the same pitch except for those of the lowest course, which were in octaves, and the four courses together were tuned in intervals resembling the top four strings of the modern six string guitar. In mid-sixteenth century Spain, the early guitar was barely differentiated from the vihuela, a six-course, guitar-shaped instrument that was tuned like a lute and which a 21st century observer might readily mistake for a modern six string. The guitar featured only as an afterthought in the many 16th century publications of Spanish vihuela music, a treble instrument that lacked the range and flexibility to take part in the virtuosic, multi-voice vihuela music of the time.

The small, boxy new trend was also introduced in England where it was often referred to as the gittern. Oddly enough, this is also the name of another small, necked box lute which was most popular from the 13th century to the end of the 15th century, but which never died out completely. The gittern, too, spread across Europe in the 13th, 14th and 15th centuries, becoming (among other names) the quitare and guiterne in 13th century French, the gyterne in 14th century English, the guitarra in 14th century Spanish, and the chitarra in 14th century Italian.  Laurence Wright opines that all forms of this name “stem from the Arabic qitara, itself derived from Greek kithara.”[2] He notes further that all gui- forms must have come from the Spanish guitarra.[3] According to Wright’s own constellation of connections, then, “there is no obvious break, as far as literature is concerned, between the medieval gittern and the Renaissance guitar.”[4] 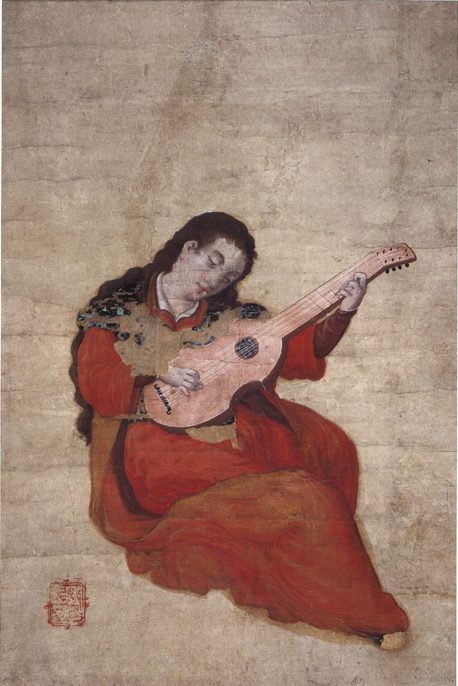 As a final example of this type, the first publication of music specifically for guitar in Italy was Melchiore de Barberiis’s Opera intotolata contina, a 1549 manuscript of lute tablature that, much like the contemporary Spanish vihuela publications, included a few guitar pieces as something of a curiosity. James Tyler and Paul Sparks note in their book The Guitar and Its Music from the Renaissance to the Classical Era that Barberiis was likely one of Padua’s many lutenists of the period who taught at the city’s prestigious university. It was there that he may have encountered the four-course guitar via some of his French, Flemish, or English students. In Italian, the four-course guitar was referred to as the chitarra da sette corde because its four courses contained two strings each for the top three courses, with one string in the bass rounding out a total of seven strings. It was also referred to by  such names as the chitarrina alla Napolettana. This is in contrast to the chitarrina alla Spagnola, a five-course guitar that was clearly named to indicate its Spanish origin, and which is variously described as a variant of the guitar or an entirely different instrument. In the coming centuries, argue Tyler and Sparks, the guitar in Italy would aid in the development of the new style known as monody, a defining musical trend of the early Baroque era[5].

Thus the early guitar had a variety of different associations for people around Europe in the 16th century. While the Italian lutenist, theorist, and composer Scipione Cerreto (1555-1633) calls the four-course instrument the “bordelletto alla Taliana”[6](little Italian brothel guitar), Gorlier makes his gesture towards the grandeur of Antiquity. For some, it was a trivial, high-pitched novelty hardly distinguishable from its stringed colleagues, while for others the guitar helped to provide the impetus towards stylistic change that only the foreign and fascinating can give. Still, different plucked string instruments clearly coexisted in the 15th, 16th,, and 17th centuries. Far from being the instrument clearly fated to take over the musical world, the guitar was, at its semi-official origin in the 16th century, one among many in its Sachs-Hornbostel camp, both an exciting innovation and a riff on an old theme.

More perplexing than the differing reactions to the early guitar is the fact that, as I have briefly suggested, the coexisting plucked string instruments of the Middle Ages, Renaissance, and Early Baroque eras often had overlapping names, roles, and associations. Much like early human history, different instrumental species of the same genus regularly intermingled, cohabited, and coexisted in the Middle Ages and the Renaissance. Yet just as homo sapiens seems to have won the race for early human supremacy, so to does the guitar, now so pervasive as to nearly eclipse all of its gut-stringed cousins, seem to have coalesced into a stable and dominant musical category.

The categories and conceptions that characterize today’s ostensibly global musical culture existed, if at all, in a radically different manner during the period which is usually considered the purview of early music. Indeed, on a second review Gorlier might not be quite so far off: many instruments with similar names and, outside of the strictures of Sachs and Hornbostel, relatively similar appearances and methods of sound production were in use in Europe and across the Mediterranean for centuries before the more narrowly defined guitar of the Spanish 16th century appeared on the scene. If Gorlier can be given the benefit of the doubt, one might see him as working within a more nebulous definition of the guitar, one defined more by its fundamentals than its surface details and more by its cultural lineage than its exact schematics. This, it seems, was a popular perspective of the time. 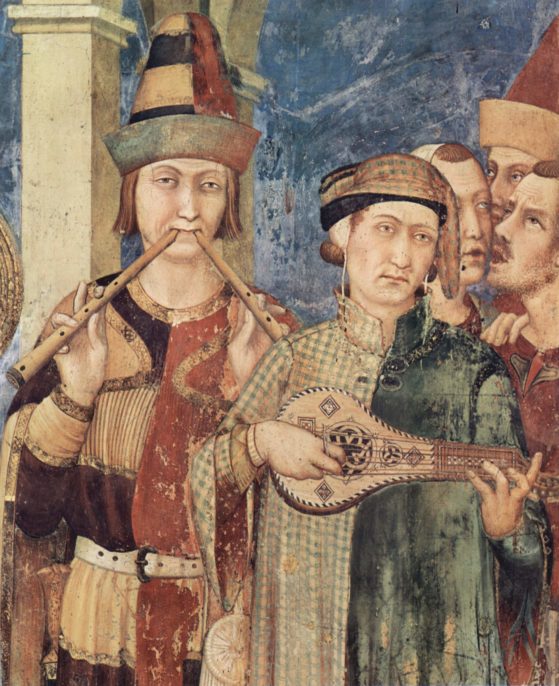 depiction of musicians playing a gittern and a set of aulos c. 1322

Like language, music spreads on a spectrum. There is no Platonic form of the guitar, and the difference between a gittern and a citole, a vihuela and a cittern, may also differ based on time, place, and circumstance. Ask a native of Valencia about their language and they may claim to speak Valencian rather than Catalan, a distinction which many linguists regard as dubious. Yet for a Valencian, this is a matter of pride and specificity, a means of reproducing and recreating one’s own local cultural sphere in contrast to another. Musical distinctions  can take on this flavor as well: sometimes, they are more about setting oneself apart from an “other” than engaging in a thoughtful and rigorous classification exercise.

Where one chooses to draw the lines — between instruments and their variants, between dialects and languages, between musical genres and sub-genres — is often more reflective of the perspectives, projections, desires, hopes, and dreams of the categorizers than a historical reality. Fine tuning the lenses through which the past is viewed can change one’s understanding of it, and each new connection can help to illuminate some previously unseen angle of the whole, wonderful, overwhelming constellation. In the end, though, a guitar is what we make of it.

A playlist of guitar music from the origins of the instrument.
Early Music Seattle: Early Guitar

Acosta Zavala, Kathy. Toward a History of the Institutionalization of the Classical Guitar: Vahdah Olcott Bickford (1885–1980) and the Shaping of Classical Guitar Culture in Twentieth-Century America, 2020.

Tyler, James, and Sparks, Paul. The Guitar and Its Music from the Renaissance to the Classical Era. Early Music Series (London, England : 1976). Oxford: Oxford University Press, 2007.