Amidst all the turmoil of our times, I thought some beautifully balanced music and lovely visual images might help.

So today I’d like us experience two works in Late Renaissance Style by the Spanish composer Tomás Luis de Victoria (ca. 1548–1611).  (Those who rebelled against this style—Claudio Monteverdi and others—called it the Stile Antico, in contrast to their own Stile Moderno.)

Victoria was one of the most important composers of the Roman Catholic Counter-Reformation, along with Giovanni Pierluigi Palestrina and Orlando di Lasso. Ordained as a priest, he held prominent positions in Rome—succeeding Palestrina as maestro at the German College and in 1575 becoming Maestro di Capella at the Basilica di Sant’Apollinare (see Attachment 1)—and from 1587, in his homeland—as chaplain to the Dowager Empress Maria, sister of Philip II, and later organist at the Convent of Las Descalzas Reales (literally the “Monastery of the Royal Barefooted”) in Madrid. 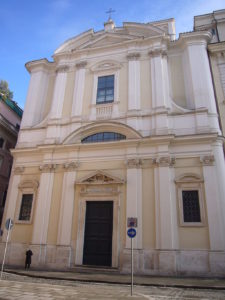 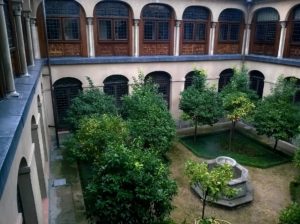 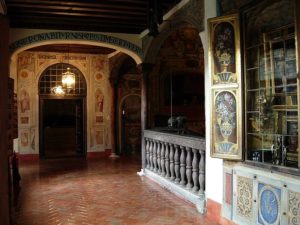 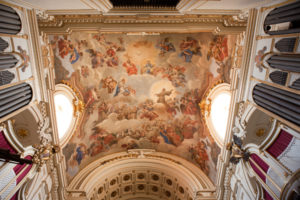 Ceiling of the Church of the Monasterio De Las Descalzas Reales, Madrid

Our performers today are the brilliant British vocal ensemble “The Sixteen,” conducted by Harry Christophers. (Oh, if we could hear them live-in-concert in Town Hall!)

O great mystery
and wonderful sacrament,
that the animals should see the new-born Lord
lying in a manger.
Blessed is the Virgin whose womb was worthy
to bear the Lord Jesus Christ.
Alleluia!

With the very homogeneous Stile Antico, “The Harmony Controls the Words.”  Consonance vs. dissonance and the relative motion of the voices are carefully regulated. Dissonances are always on weak beats, and no one voice is allowed to dominate.    How the harmony was to work was codified by the Venetian music theorist Gioseffo Zarlino in his Le istitutioni harmoniche (The Harmonic Institutions, 1558).

For visual parallels to this well-balanced style, one can turn to Leonardo da Vinci’s The Last Supper (ca. 1494), Michelangelo’s Pieta (Rome, 1498–99), and Raphael’s The School of Athens (1509–11). The latter is very much in “polyphonic style,” with the imitative figures, left vs right, “entering” at different levels of the visual plane.

For many years my example of the Stile Antico for my university classes was Victoria’s motet for the Annunciation, “Ne timeas Maria” (Fear not, Mary).  After a reassuring, controlled polyphonic opening, elaborate melismas focus our attention on God’s grace (gratiam . . . Dominum) and the miraculous being in Mary’s womb (in utero).  A full cadence sets off the final line, “and he shalt be called Son of the Most High” (et vocabitur Altissimi filius), with its upward leaps on Altissimi and joyous melismas on filium.

Again our singers are “The Sixteen.”

Fear not, Mary,
for thou hast found grace in the sight of the Lord:
behold, thou shalt conceive in thy womb and shalt bring forth a son, and he shalt be called Son of the Most High.

To close, I would like to share with you a digitally-created performance by Seattle’s own Medieval Women’s Choir—founded by the greatly missed Margriet Tindemans in 1990—singing the traditional canon Dona nobis pacem (“Grant us peace,” attributed to Mozart), paired with images of the glorious, soaring Gothic stained-glass windows in Sainte-Chapelle, Paris, provided by our friend in Bath, Maine, Yves Feder. 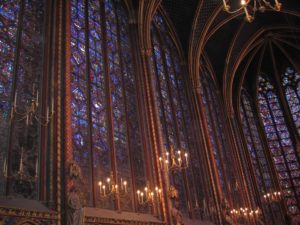 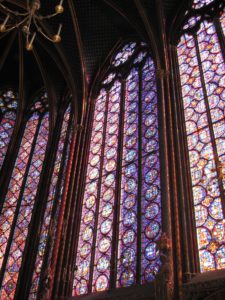 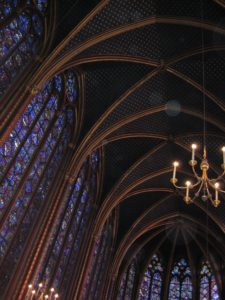 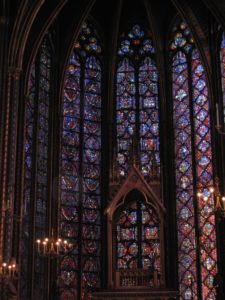 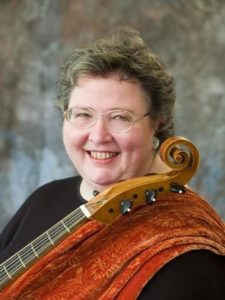 I hope these sounds and images will inspire and bring you as much peace as they do me.