This online event is hosted by the National Flute Association. Free and open for all, advance registration required. 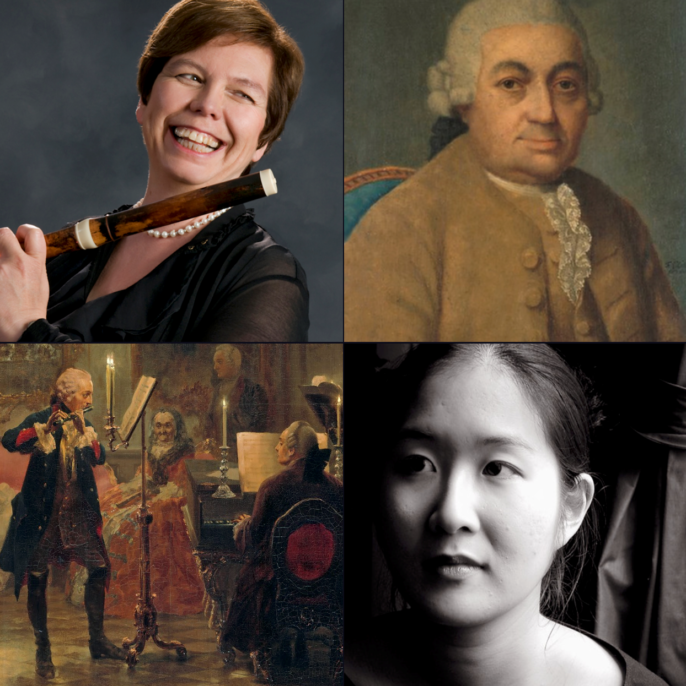 Music-making is often compared to storytelling, which combines speech with imagery to create an emotional impact on the listener. This might seem straightforward for programmatic music (think Vivaldi’s “The Four Seasons” or Beethoven’s sixth symphony “Pastoral”), but it’s easy to unconsciously step away from this concept when dealing with non-programmatic music.(for example, music simply titled as “Sonata”)

I remember learning Carl Philipp Emanuel Bach’s Sonata in A-minor for solo flute for the first time as a teenager. The famous opening measures were always a puzzle for me. I didn’t really like it, or didn’t like how I was playing it, but I also had no idea as to how else to make the music more enjoyable. I couldn’t appreciate those wide leaps, odd articulation indications, and jarring harmonies. Not to mention, as a young teenager I was also not particularly attracted to the very slow tempo which my teacher had demonstrated.

First movement of the C.P.E. Bach Sonata in A-minor

Things would get a little more understandable in the following movements, perhaps mainly because they are faster. But C.P.E. Bach’s musical language remained stern and less than approachable for me, from the frequent stop-and-go motifs to sudden changes in dynamics and harmony. Many aspects in the music just didn’t make sense to me at that time and I felt only obligated to learn it.

Ten to fifteen years later into my life, studying historical performance and looking into original sources have helped me tremendously in gaining understanding and appreciation for C.P.E. Bach’s work. The switch to playing on a baroque flute also shed insight into that early sound world which I otherwise wouldn’t be able to experience on the modern flute. Even more recently, practicing fine-art photography also brought a strong visualization element into my music-making. It has been fascinating to discover the parallel concepts between music and photography, whether it’s about attention to composition, understanding light and sound, or the process of long-exposure. I find myself approaching music with many more specific ideas, down to every note I play. Musical notes take on a 3-dimensional form, and employing different articulations is not just about conforming to historical performance practice, but it is an artist’s tool for carving out shapes and lines in the sound. When creating a photo composition, I scan my frame to compose with intention in-camera and try not to resort to post-cropping. I choose a certain type of lighting to create the expression desired. The two disciplines mingle and influence each other, enriching my creative process.

During the various COVID lock-down periods, I took the step further in creating art films combining my music and photography. The Limerick Early Music Festival premiered some of my works on their digital stage. The imagery in these films are not simply there as something nice to look at, but rather they reflect an awareness for the musical form and content. In addition, each image stands as a crafted photo composition on its own.

Back to the Bach sonata, I think the piece deserves much more appreciation from flutists. I think back to my early years in learning the piece and wish that I had access to information and exchange of ideas as we do now. Thus together with the flutist Na’ama Lion, we warmly invite all flutists and music-lovers to join our conversation on November 7th about the art of storytelling in music. We will demonstrate how to appreciate Bach’s humour and use one’s creative forces to bring his quirky musical language to life, just like how a compelling storyteller would engage an audience. And this is just the start, for storytelling doesn’t stop with the music of C.P.E. Bach.

Flutist Teddie Hwang specializes in performing on historical instruments of the 17th to early 19th century. Based in Germany, she has given workshops on historical performance at institutions such as the San Francisco Conservatory of Music, the University of Victoria BC, the Escuela Superior in Mexico City, and at the Irish World Academy of Music and Dance in Limerick. In addition to the flute, Teddie practices fine-art photography.  Specializing in portraiture for musicians, she creates each image like a musical composition with a specific structure, emotion, and style.  She enjoys the challenge of expressing the essence of music and of musicians through a visual medium.