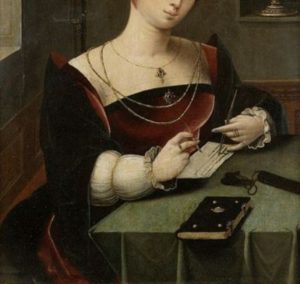 The lament “O death, rock me asleep,” generally attributed to Anne Boleyn, was written shortly before her execution in 1536.  Anne was the second wife of Henry VIII, 1533–36, and mother of Queen Elizabeth I.  She did not give Henry the son and heir he wanted, and to clear the way for Henry to marry his new love interest, Jane Seymour, Anne Boleyn was charged with and convicted of adultery, incest, and treason.  (Under torture the Flemish court musician Mark Smeaton confessed to being one of Anne’s lovers.)  Either Anne or her brother may have written the resigned poem “O death, rock me asleep.”  The composer of this lovely setting is unknown.  The rocking effect is created by the gloomy repetitive (ostinato) bass.  Note the dissonant cross-relationship on “I die.”  (The program notes on how this performance was created are well worth reading.)  Our performers are Anna Dennis and Voices of Music. 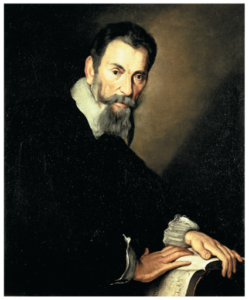 Upon learning of the death of his beloved Eurydice on their wedding day, Orfeo sings of his grief in an expressive recitative full of dissonances and proclaims he will win her back from death by wooing the king of the Underworld with his beautiful singing. Orfeo then sings his poignant farewell to the world of the living as he begins his journey into Hades. Text painting includes the words abissi (abyss) and morte (death) sung on the low notes, and stelle (stars) and sole (sun) sung on high notes.

Our video, from the Jordi Savall production, begins with the arrival of the Messenger bearing the sad news and the reaction of the Shepherds.  After the lament the “Greek Chorus” reacts to Orfeo’s pledge, and the Messenger ends the touching scene.  The lament begins at 8:00 mins.  (If you want to enjoy the full opera, this is the video performance I would recommend.) 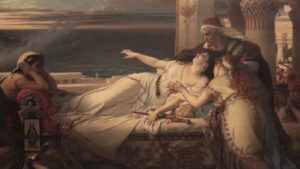 According to Roman legend, the Trojan warrior Aeneas, sailing to settle in Italy after the fall of Troy, is blown off course from Sicily and lands in Carthage, on the shore of North Africa, where he falls in love with the queen, Dido.  But duty calls, and Aeneas departs for Italy, leaving Dido to lament his betrayal. She orders a pyre to be built and set ablaze so that Aeneas will see from his ship that she has killed herself, and she sings her lament before stabbing herself, as Aeneas sails on.

Dido pours forth her sad aria over a repeating, descending chromatic bass line known as a “lament bass.”  If this were an instrumental piece, it would be called a Ciaccona or Chaccone; the meter is a slow 3/2, the key, G minor.  I love the expressive drooping second on the word “laid,” expanded into a full descending line on the word’s repetition, the clarion calls “remember me,” and the urgent cry “but ah!” followed by the touching descent, “forget my fate.”  A postlude of sighing seconds by the strings closes this tragic aria.

Thy hand, Belinda, darkness shades me,

On thy bosom let me rest,

More I would, but Death invades me;

Death is now a welcome guest.

When I am laid in earth

May my wrongs create

No trouble in thy breast;

Remember me, but ah! forget my fate,

Our performance is by soprano Anna Dennis, soprano, and musicians of Voices of Music. 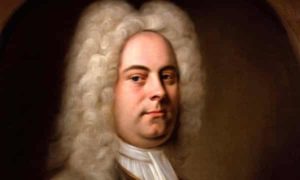 The heroic male roles in late Baroque opera seria were sung by castrati (male sopranos) like the famous Carlo Maria Broschi, known as Farinelli (1705–82).  Young boys with beautiful soprano voices were castrated before their voices changed.  Due to hormonal imbalance, their legs and ribs grew longer than usual, giving them very large lungs, good for sustaining long notes.  The aria is in the typical da capo form, with the return of the A section decorated by the performer.

In this fantastical tale of love and war during the First Crusade to Jerusalem (1096–99), Rinaldo is a knight who falls in love with his general’s daughter, Almirena, who is abducted by the evil Queen Armida of Damascus, a powerful sorceress.  Rinaldo laments the loss of his beloved:

Our performance is from the famous movie Farinelli (1994). (You may wish to avert your eyes during the milk-bath castration scenes, but don’t miss the unfolding peacock.)  The voice of Rinaldo is a melding of the voices of soprano Ewa Malas-Godlewska and countertenor Derek Lee Ragin, with harpsichordist Christophe Rousset directing.  It should be noted that, while the movie is enjoyable, many of the specific incidents have little basis in historical fact.

(For a deliciously limpid rendition with lovely ornamentation, see soprano Kirsten Blaise and Voices of Music: