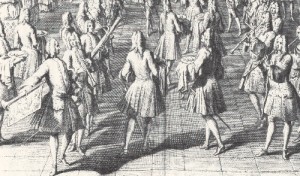 There will be an Oboe Band Workshop presented in partnership with Early Music Seattle at Christ Episcopal Church in the University District as tribute to the recently passed bassoonist Michael McCraw.

Michael passed away of Covid on May 30th, 2020 and we are holding our first in person event to celebrate his past workshops and continue the legacy of the double reed workshops that he and the also departed oboist Washington McClain created together both here in Seattle and in Albuquerque.

For those of you that are new to the world of double reeds, an oboe band is often comprised of two oboe parts, a taille de hautbois (tenor oboe), and a bassoon. While oboe bands played throughout Europe in the 18th Century, the tradition of the baroque oboe band reached its peak at the court of Louis XIV and his “Les Grand Haubois” also known as the “Douze Grand Haubois du Roi”.

Michael was known in the Seattle historical performance community since the 1990s when he made a recording of Vivaldi Concerti with Seattle Baroque Orchestra that also featured a multiple instrument concerto with oboists Washington McClain and Sand Dalton.

The past workshops welcomed both amateur and professional players of baroque oboes and bassoons, and eventually added harpsichords and violins. With this reboot, we hope to make the workshop an annual event once again. I worked as their assistant and collaborator in many of their past workshops and concerts.

An ensemble at the 2011 Seattle Double Reed Workshop

Our Oboe Band will play music of  Lully, Philidor, Fischer, Telemann and others and we look forward to sharing a video of some of the music that we will have worked on.

Reed making with Washington McClain at the 2005 workshop