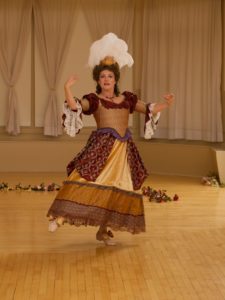 Email Anna at to register for classes.

Please make payment via the PayPal app on your phone, or go to the PayPal website. Then you use the following email when promoted to make payment to me: info@seattleearlydance.org.

Mondays September 14 – October 19
Beginning Renaissance, 5:15-6:15pm
We will study Chiara Stella, a Cascarda from Il Ballarino by Fabritio Caroso, published in Venice in 1581.
Cost for 6 classes: $72.00
This class is for those who have little or no experience of Renaissance dance. If you took the Beginning Level Renaissance class with me last session, then this is the class to sign up for.

Tuesdays September 15 – October 20
Beginning Baroque I, 11:00am-noon
We will study La Savoye, a Bourrée published in Recueil de Dances by Raoul Feuillet in Paris in 1700. The dance is by Louis Pécour, an outstanding dancer and prolific choreographer.
Cost for 6 classes: $72.00
This class will build on the work we did last session, studying La Bourrée d’Achille. New people are welcome to join if you don’t mind doing a bit of catching up! This is not an absolute beginning level class.

Intermediate Baroque, 12:30 -1:30pm
We will study A Jigg by Mr. Pécour (Forlana) from Pemberton’s An Essay for the Improvement of Dancing published in London in 1711.
Cost for 6 classes: $72.00
This class is for those with extensive dance experience, or who have studied with me for at least 2 years in the past, or with another Baroque teacher.

Intermediate Renaissance, 8:00-9:00pm
We will continue with our studies of the Passo e mezzo, a Balletto found in Fabritio Caroso’s Il Ballarino published in Venice in 1581.
Cost for 6 classes: $72.00
This class is for those with extensive dance experience, or who have studied with me for at least 2 years in the past, or with another Renaissance teacher.

Thursdays September 17 – October 22
Advanced Baroque, 1:00-2:00pm
In this class we will study the Entrée Espagnolle pour une femme, published in Raoul Feuillet’s 1704 collection Entrée de Ballet, with choreography by Louis Pécour.
Cost for 6 classes: $72.00
This class is for those with extensive Baroque dance experience.

Fridays September 18 – 23
Beginning Renaissance 1, Noon-1:00pm
We will study Alta Regina from Fabritio’s Caroso’s Nobiltà di Dame, published in Venice in 1600.
Cost for 6 classes: $72.00
This class will build on the work we did during the previous session. New people are welcome to join if you don’t mind doing a bit of catching up!

Anna Mansbridge (she, her), choreographer, dancer and educator, is originally from Australia and the UK and now resides in Seattle, Washington. She holds a First Class Honours Degree in Dance and Education from Bedford College, UK, and an MFA in Choreography and Performance from Mills College, CA. She first discovered Early Dance while a student at Bedford College. She studied with Philippa Waite and Mary Collins in the UK, and with Wendy Hilton in the US. From 1995-2001 she co-founded Footworks OffLimits with Mary Collins and Eva Leander.  Anna emigrated to Seattle, WA, in 1998, and in 2000 she founded Seattle Early Dance, dedicated to recreating dances from the Renaissance and Baroque periods. Anna has choreographed and directed Early Opera productions in Europe and the USA. Her directing/choreographing credits include Rappresentatione di Anima et di Corpo by Emilio De’ Cavalieri (1600); The Indian Queen by Henry Purcell (1695)  with Early Music Seattle;  La liberazione di Ruggiero dall’isola d’Alcina by (1625) by Francesca Caccini; Wayward Sisters, an evening of dance and song from seventeenth century Italy with Pacific MusicWorks; Le Bourgeois Gentilhomme by Jean Baptiste Lully; Venus and Adonis by John Blow; and Dido and Aeneas by Henry Purcell. Anna was the choreographer for Christoph Gluck’s Orphée et Eurydice (1774) presented by UW School of Music and Pacific MusicWorks at Meany Theater in May 2016. A review in the Seattle Times described her work as “effective and beautiful.” In addition, Anna has directed a DVD titled Baroque Basics: An Introduction to the Dance and the Music of the Baroque Period. Anna has been an adjunct instructor at Cornish College of the Arts and the University of Washington, and she has taught on early music courses in Europe, Asia and the US. She also teaches at the Creative Dance Center, founded by Anne Green Gilbert in 1981, and directs Kaleidoscope Dance Company for ages 7-17.