Seattle Baroque Orchestra is a pocket orchestra comprised of leading-edge artists; it breathes new life into early music through innovative performances and uncommon collaborations. With varied musical programs, SBO engages audiences through world-class productions in a variety of local venues. Our one-of-a-kind concert experiences will turn everything you thought you knew about early music on its head, as we take you on musical journeys that explore new repertoire, challenge the limits of what you thought was possible, and find exciting ways to reimagine the classics.

Reimagined during the pandemic, Seattle Baroque Orchestra returns to the stage under the direction of Alexander Weimann in January 2022 with a new vision and a firm commitment to serve Pacific Northwest audiences with great music! A tidal wave of artistic energy flows from the ensemble’s newly appointed Concertmaster, Rachell Ellen Wong. A recent graduate of the Historical Performance Department at the Julliard School and hailing from Lynnwood, WA, Ms. Wong makes this region her home and is excited about her new position with Seattle Baroque Orchestra.

“When you first start learning about the Baroque language, one of the first things you hear are the many “affects” or emotions of the music. Getting to express these emotions on stage, you really feel like a storyteller.”
– Rachell Ellen Wong

With offerings ranging from smaller intimate pieces to larger scale orchestral works, Weimann, Wong, and Seattle Baroque Orchestra tackle everything from music of the 17th century convent and cloister to the Six Brandenburg Concertos with a full complement of winds and brass. New guest artists such as countertenor Reginald Mobley combine with the mostly Seattle-based baroque performers that audiences have grown to love. 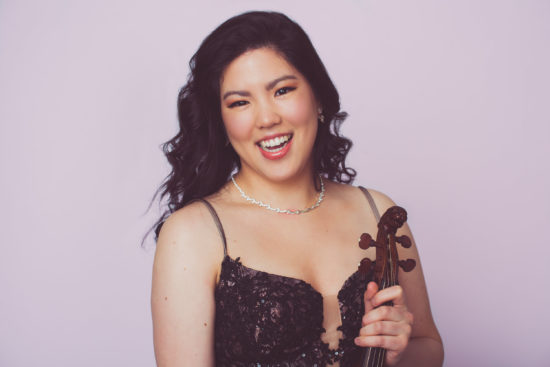 A rising star on both the historical performance and modern violin stages, and a sought-after collaborator, Rachell Ellen Wong has a growing reputation as one of the top historical performers of her generation.

Alexander Weimann, in announcing the news in Early Music Seattle’s newsletter, wrote, “This past year has been a period of re-inventing the Seattle Baroque Orchestra: While the pandemic forced us to cease our usual activities, we still made good use of the time by re-grouping our personnel, re-thinking our repertoire and mandate…. At the same time, the retirement of our beloved concertmaster Linda Melsted prompted us to look for a new leading artist to start with into the post-pandemic era.

“…she combines everything we were looking for in Linda’s successor: the highest artistic integrity and true musicianship, the authority that comes with being an outstanding virtuoso and the warm collegial spirit needed in our world.

“In short, I could not have dreamed of such a beautiful choice for the position of concertmaster to the Seattle Baroque Orchestra, and I am simply overjoyed that Rachell has accepted our invitation.”

Recipient of a prestigious 2020 Avery Fisher Career Grant (the first baroque recipient in the respected program’s history) and Grand Prize winner of the inaugural Lillian and Maurice Barbash J.S. Bach Competition, Ms. Wong has performed throughout the United States and Canada, as well as in the United Kingdom, Canada, Italy, Costa Rica, Panama, China, and New Zealand. She has performed with such respected ensembles as the American Bach Soloists, The Academy of Ancient Music, Bach Collegium Japan, and Les Arts Florissants, among others. Equally accomplished on the modern violin, Ms. Wong made her first public appearance with the Philharmonia Northwest at age 11 and has since performed as a soloist with such orchestras as Orquesta Sinfonica Nacional de Panama and Seattle Symphony.

Along with her new responsibilities with Seattle Baroque Orchestra, Rachell Ellen Wong’s continues her career as a soloist.

Ms. Wong served as a 2019-2020 Mercury Chamber Orchestra Juilliard Fellow, and as an 2019-2020 American Fellow of The English Concert, and as Artist-in-Residence with the Heifetz International Music Institute in Staunton, Virginia from 2017-2019.

A native of Seattle, Washington, and a recent graduate, Ms. Wong holds a Masters in Music in Historical Performance from The Juilliard School in New York City, where she moved after receiving her Masters in Music from Indiana University and a Bachelors of Music from The University of Texas at Austin. She performs on a baroque violin from the school of Joachim Tielke and a violin made by Carlo de March. www.rachellwong.com

Early Music Seattle presents Seattle Baroque Orchestra and Olivier Wevers’ contemporary dance company, Whim W’Him, as they join forces to perform Pergolesi’s enduring masterpiece Stabat Mater, the ancient hymn portraying Mary during the Crucifixion. Inspiration overflows in this fusion of art forms. Under the guidance of Music Director Alexander Weimann, Pergolesi’s 18th-century score comes to life on the delicate gut-strung baroque string instruments of the Seattle Baroque Orchestra. Incisive one moment and dreamlike the next, the music drives the dancers to explore a rage of expression the composer probably could not have imagined. Vocal soloists Yulia van Doren and Krisztina Szabó round out this stelar performance.

Handel’s “Messiah” performed by the Seattle Baroque Orchestra and Byrd Ensemble under the direction of Alexander Weimann, at St. Mark’s Cathedral, Seattle, April 27, 2019.

A Few Words from Alexander Weimann

Alexander Weimann talks about the challenges and exhilarating parts of being a musician.

The role music plays in our world and the community and how will the coronavirus affect live music performances in the future?

Alexander talks about what early music means to him.