Rococo, a Reaction Against the Baroque

As the first days of Spring appear and the pandemic begins to loosen its grip on our lives, it’s time to enjoy ourselves with some music from the period in France now called the “Rococo” (ca. 1720–60).

Rococo art and music represent a reaction against the Baroque. An aristocratic art created at the time of the French Enlightenment, it rejected the lofty, solemn, overly ornate approach of the High Baroque (Barocco), replacing it with an art, architecture, and music distinguished by its playfulness, lightness, artificiality, and sentimentality (Rococo).

The word Rococo may have come about as a combination of the French words rocaille (stone) and coquilles (shell), since shell shapes were often employed in architectural decoration at the time.

Compare Peter Paul Rubens’s High Baroque painting Venus and Adonis with Jean-Honoré Fragonard’s The Snatched Kiss; note how the eyes of the lovers are caught in a sneaky glance to the right, down the arm and removed scarf toward the matrons of propriety seen through the open door playing cards, unaware of the forbidden goings-on in the next room), François Boucher’s An Autumn Pastoral; with the shepherd boy slyly checking out the lovers) and Shepherd Piping to a Shepherdess, and Fragonard’s The Swing (Attachment 5), which catches the moment when the young gentle lady’s shoe flies off, revealing her FOOT! Indeed, the exuberant and fluid manner of the paintings of Fragonard (1732–1806) embodies the freedom and curiosity of the French Enlightenment. 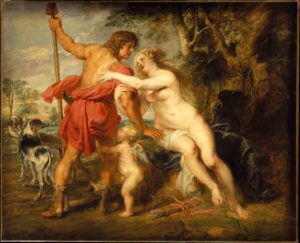 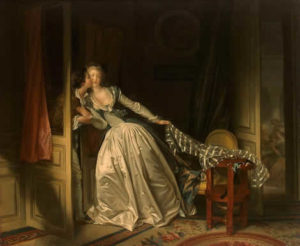 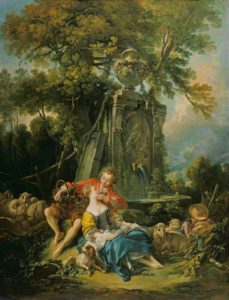 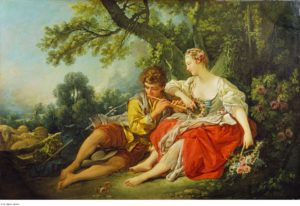 (According to http://www.usask.ca/art/a31701/site/britski/swing.html, the unknown patron of the hedonistic The Swing had first asked another artist, Gabriel-Francois Doyan, to paint his mistress on a swing being pushed by a bishop. He wanted to include himself in the scene, in a position where he could look up the young woman’s skirts. Doyan turned down the commission and referred the patron to Fragonard.  The couple in the painting appear to be having a secret affair, or are about to have one, as indicated by the statue of Cupid holding a finger to his lips. The swing is a symbol of the fickle, playful woman. As she is swinging, her skirts part so that the man below is able to see up them. The man pushing the swing may be a bishop, or perhaps he is the woman’s father or husband who is unaware of what is going on. The young man holds out his in hat and offers it to the woman as she loses her shoe, which suggests that they are both promiscuous. Her shoe flies through the air and will land in the bushes, where the couple will likely meet for a tryst.)

Rococo music is referred to as being in the style galant, or galant style. The music typically had a simple, “natural” homophonic (rather than complex polyphonic) texture, with melodies consisting of short, balance phrases (under the influence of dances), with much repetition and at times profuse ornamentation, set over a bass line.

The “Back to Nature” philosopher Jean-Jacques Rousseau favored rural simplicity over urban (court) sophistication. Correspondingly, composers like François Couperin (the Grand, 1668–1733; Louis Claude Daquin (1694–1772; and Jean Philippe Rameau (1694–1764l; enjoyed writing entertaining “nature” pieces, though they were performed on a very un-rural instrument – the harpsichord – just the way the painters’ cast of characters were often found in courtly dress. 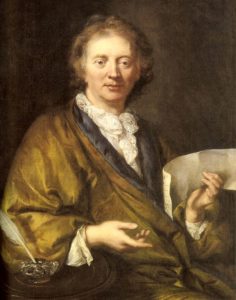 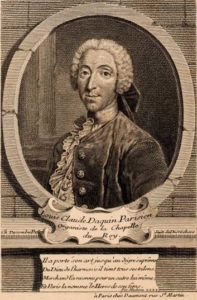 The music included country dances, like Couperin’s Musétes de Choisi et de Taverni (Bagpipe Dances from Choisi and Taverni, 1721), to which we might listen while looking upon Jean Antoine Watteau’s Les Bergers: Dancing Couple and Bagpiper – and espying through the trees the back of Fragonard’s girl on the swing! 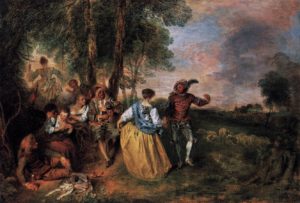 (Choisi is located on the Channel Island of Guernsey, Taverny is now a commune in the northwest suburbs of Paris.)

In both pieces, over a “murky bass” imitating the drone of the country bagpipe, an “improvised” shepherd’s pipe melody sings forth.

And here is another nice performance, this one by Luc Beauséjour.
https://www.youtube.com/watch?v=VigyDex1zws

Daquin’s Le Coucou has also become a favorite of organists:

Olivier Penin playing the organ of the Chapelle de Jésus-Enfant in Paris
https://www.youtube.com/watch?v=TyAN4e9WrcI

Albano Berberi, performing on a double-manual harpsichord after the 1624 instrument by Ruckers)
https://www.youtube.com/watch?v=NIVMYtEN2Dk

And another, by Sylvia Kind (formerly on the UW Faculty)
https://www.youtube.com/watch?v=2CBvnoz33t4 (start at 8:15)

As the program notes for the Berberi recording observe, “La poule, with its staccato melodies and abrupt, stop-and-go phrasing, easily brings to mind the image of a chicken pecking and fluttering its way jerkily through a farmyard. The harpsichord, with its sharp attack and quick, light action, represents all-too-well the nervous nature of this very agitated bird.”

We cannot close without:

After our long, dark winter, I hope these delightful little pieces bring a little well-needed Spring to your soul.