On February 27, we presented a great selection of works from Spain, beautifully rendered by Accademia del Piacere. One reason to focus on Spain is that many of its musical forms later influenced other composers — forms such as the pasacalle, chascona and follia. Spain also contributed interesting new instruments, such as the vihuela.

Notwithstanding this, there is also a need to explore sacred music from Spain. We can sense this by considering that, according to Jordi Savall, music needs to be performed in the right place. It would be strange to perform Gregorian chant in a theater, or an opera in a cathedral. Both profane and sacred music need to be rediscovered.

In his early youth, Jordi Savall belonged to a choir which sang, almost daily, Gregorian chant and polyphony as part of regular church services, along with villancicos and popular songs. His knowledge and love for music grew as part of this day to day experience. In Spain nowadays, this would be rare – the world in which Jordi Savall grew up needs to be rediscovered.

Here, I see three broad challenges. The first, and more urgent, is to recover and perform sacred music in any setting, so that its beauty can be appreciated. The second is to perform it in its proper architectural place so that the interplay between the music and the architecture, with its deep resonance and symbolic significance, can be experienced. The final challenge is restoring the sacred music tradition within the liturgy, with its pauses of silence, and the union of singing voices with the incense rising to the highest crevasses of a cathedral ceiling.

Sacred music encompasses the treasure trove of polyphony, which grew out of Gregorian chant in France and was further developed during the Renaissance.  Polyphony, according to an anecdote, was almost excluded from the Catholic church services at the Council of Trent, because it was thought that the multiple voices made the words difficult to understand – based on the idea that the word, or logos, has primacy over music.

The best Spanish composer in polyphony was Tomas Luis de Victoria, who we profiled in an earlier article. He was formed, musically, in Rome. To learn more about Tomas de Victoria, there is a wonderful BBC documentary, made in commemoration of the 400 years of his death: God’s Composer: Tomás Luis de Victoria (BBC, 2011)

Spain’s sacred music also involves Gregorian chant, which became the standard in western Christendom. Within Spain, the Gregorian liturgy was first adopted in Cataluña due to its close proximity to the Franks. As other Christian kingdoms in the peninsula reconquered territory from the Muslims, they gradually established this liturgy to foster unity with other parts of Europe.

Nowadays, Gregorian chant should be central in the liturgy of the Roman Catholic church, Spain included, for according to its latest council, “Gregorian chant is specially suited to the Roman liturgy: therefore, other things being equal, it should be given pride of place in liturgical services.”

I learnt about this disposition in 2003 when taking a class with a bishop who had participated in Vatican II, dom Ivo Lorscheiter, of happy memory; when my wife and I married two years later in Costa Rica, we used Gregorian chant: the Missa de Angelis. The priest — an old Spaniard from Avila — shed a few tears in front of the altar at the moment when the Gloria began. The last time he had celebrated a liturgy with this music had been decades before.

One of the best recorded renditions of the Missa de Angelis is by the Schola Gregoriana Mediolanensis in Milan, with Giovanni Vianini. 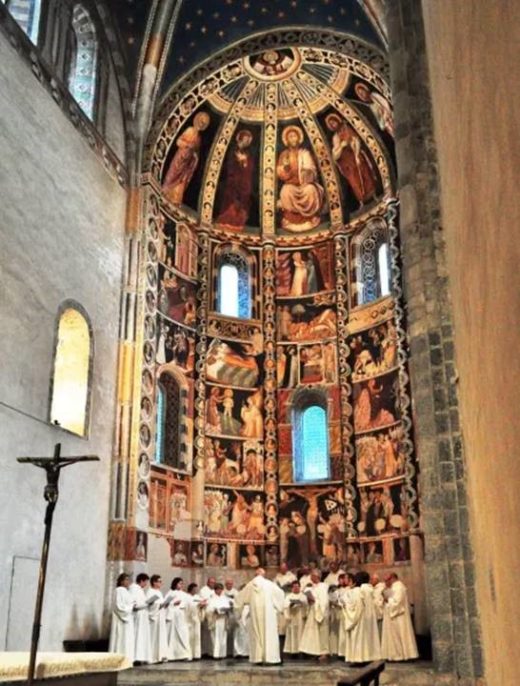 Spain’s early sacred music tradition also includes Mozarabic chant (which means “among the arabs”), which evolved along with the local rite developed since the Visigothic era; its golden age was between the years of 589 and 711. While the Latin is clear and liturgical, its vocalization shows evidence of Arab influence. 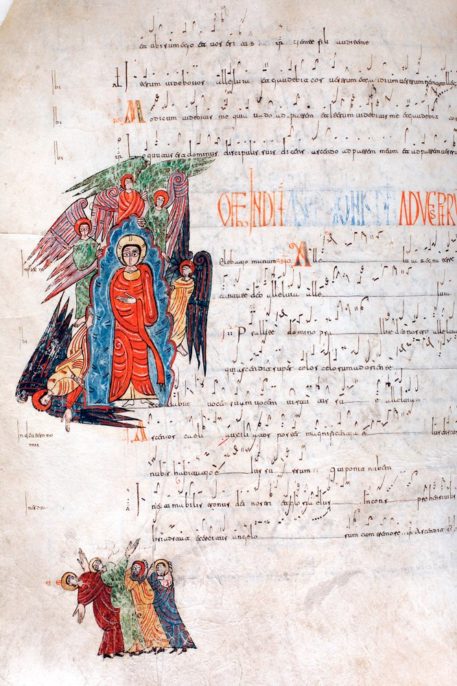 Detail from the Antiphonary of Leon showing Mozarabic chant

The melody of Mozarabic chant was not written down in a way that can be transcribed: most of it was written in neumes with no pitches or intervals. We only have about twenty sources and the main one was preserved due to the care of a monk who jotted down a few hymns with the new musical notation of Gregorian chant.

Even before our current pandemic started, it was rare to find either Gregorian chant or polyphony at regular church services in Spain. The Mozarabic rite, and chant, was confined to a side chapel in Toledo’s cathedral plus a couple of other places. We hope that after this pandemic is over, the beautiful treasure of sacred music will be rediscovered and restored, especially in its liturgical context. The formation of new sacred music groups in Spain, of which there are now 14, such as the Schola Cantorum of Zamora, in 2019, is an encouraging sign.