“We need eight billion little lights shining at once.”
-Stephanie Anne Johnson, from “I Know” for Many Messiahs 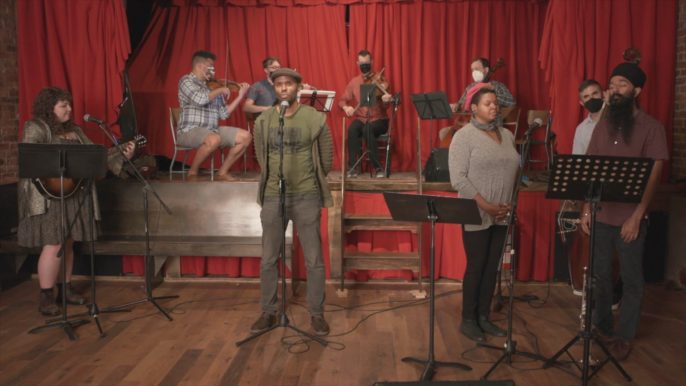 “Behold, I tell you a mystery,” the bass soloist sings near the end of Handel’s Messiah; “We shall all be changed in a moment, in the twinkling of an eye.” In its original Christian context, this bit of prophecy envisioned what would happen after the coming of the Messiah, when the dead would rise again, pure and incorruptible. In the framework of Many Messiahs, we strip away the religious specificity of our source material and take the words at face value. And so we ask: What would it mean for all to be changed, and what if it could happen just like that, in the twinkling of an eye?

Many Messiahs has a plan to transform concert halls into spaces that embrace all people and invite them into a community of hope and peace. The centerpiece of our work will be a concert experience, featuring our artistic team in collaboration with choruses and orchestras. We envision taking our touring company into high-profile venues in the U.S. and beyond each holiday season, spreading our gospel of activism and awakening. All the ingredients for this concert program are in place, and now it’s just a matter of funding the process, writing the music, and convincing the gatekeepers of these spaces to take a chance on our vision.

We also recognize that structural injustice requires structural change, which takes more than a single night in a concert hall. When Many Messiahs comes to a city, the work will start months in advance, as we train local teaching artists to fan out across their communities. One branch of the work will take place in schools, especially those that are under-resourced; our teaching artists will bring a curriculum to middle and high school students that will allow them to use cutting-edge music production tools to sample and loop their own remixes of Handel’s Messiah. By exploring the beauty of the music and the meaning of the words, and by empowering young people to craft their own messages of truth and reconciliation, we offer a pathway to the concert hall as a sanctuary of personal expression, where all viewpoints count.

The other branch of our community work will happen when our teaching artists gather with communities and affinity groups for workshops on listening to each other and singing together. Sing-along portions of Many Messiahs will serve as conduits for the work of healing old wounds and creating unity and connection across seemingly intractable divisions. These workshops will meet people where they are, and where they already gather, in an effort to invite them into the fold of the Many Messiahs. By the time the concert arrives, they are already part of it, ready to add their voices to the chorus of activism.

We want to spark a movement that can be bigger than any of us. The artists of Many Messiahs will use their talents and platforms to get this music established, but after a few years we plan to turn it over to the people, publishing the sheet music so any local chorus, orchestra or school can mount its own production, collaborating with local creators from diverse backgrounds. A staggering number of Messiah performances that take place each year in all sorts of venues, and if even a small percentage of those switched over to Many Messiahs, the impact would be enormous.

Our vision is also bigger than this one project. Many Messiahs is just the first in a series of offerings from Many Masterpieces LLC, the entity that will produce and publish transformative works rooted in the classical canon. We’re already planning a piece on climate change, One Mother, drawing on maternal themes in the music of Pergolesi and others. We also envision a celebration of LGBTQ+ rights in Many Marriages (riffing on Mozart’s gender-bending comedy The Marriage of Figaro), and a meditation on domestic violence drawn from Schubert’s “Death and the Maiden” song and string quartet.

We don’t know how the mystery of this process will unfold, and so we proceed on faith that the day will come when our collective work can reach people and change their hearts. It might happen in a moment—a moment reached after years of toiling—and it will fuel us until the next moment, and the next. This is work that will not be finished in our lifetimes, and it is more than anyone can do alone. As Stephanie Anne Johnson sings, “We need eight billion little lights shining at once.”