“Let’s build the Zion of our dreams.”
-Michiko Egger, from “Our Zion” for Many Messiahs 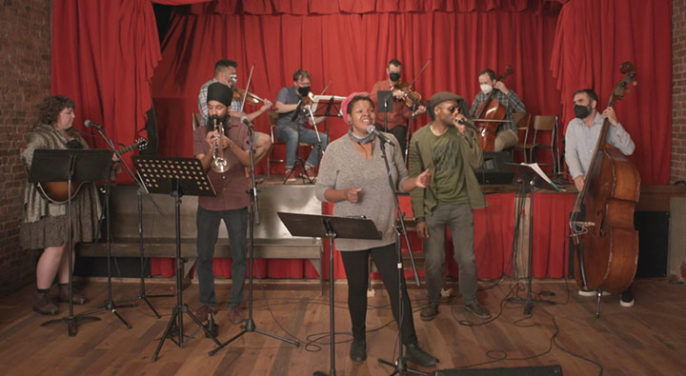 At the beginning of Handel’s Messiah, the tenor soloist tells us of a voice “that crieth in the wilderness,” urging us to “prepare the way.” There’s a recurring theme in Biblical mythology about being cast out into the wilderness or wandering in the desert—because transformation doesn’t happen from a place of comfort. It requires venturing into the unknown.

Many Messiahs has come a long way from the first spark of inspiration that came to me on a sleepless night in June 2020, less than a month after the murder of George Floyd. I originally envisioned a collaboration with a hip-hop artist that oscillated between intact movements of Handel’s Messiah and new songs that amplified the oratorio’s deeply ingrained themes of activism and awakening. After all, isn’t Messiah simply the story of a man whose very existence was seen as a threat by the state, and who suffered gravely for daring to speak up?

By July I had already found the hip-hop artist and poet Darian Dauchan, a multitalented and socially conscious creator who had formed a genre-bending trio with violin and acoustic bass. I emailed him out of the blue, and he was game to explore the idea. We met over Zoom for months to shape our vision, and took our first strides toward creating music about a year ago.

This project almost fell apart the day Darian and I first shared musical sketches with each other. There was a huge gap between our musical perspectives (which was always the point), but how could we coalesce around a single perspective that honored our differences?

We couldn’t. But one thing I could do was give up the control that I was so accustomed to claiming as a privilege and birthright. I committed to Darian what I wish I had known to do from the beginning: that I would trust his immense musicianship and do all I could to provide a platform for him, without needing to make him conform to my idea of what it would mean to do this right.

Our collision of musical values and the honest conversations that followed revealed to me that there is no one right way to process the truth of racism and the hope for the future, let alone a right way to do it in dialogue with a 280-year-old musical masterpiece rooted in sacred texts that go back thousands of years. To have any shot of getting at a universal truth, we needed to dream bigger. We needed Many Messiahs.

I began 2021 on a deep dive into the intersection of music and activism, researching artists who were already doing the work that might align with this project’s vision. I was floored when the ones I was most excited about actually answered my emails and agreed to meet! It helped to be doing this at a time when successful touring artists were all stuck at home; Many Messiahs likely would never have happened if not for a pandemic that opened creative bandwidth for artists who were used to driving hard and fast in their own lanes, myself included.

It was clear from the start which artists possessed the deep musicianship and human sensitivity to say something profound in this meeting of worlds. The process we developed was to write a trial song together, based on material from Handel’s Messiah. In the collaborations, I functioned something like a representative for Handel himself, suggesting source material, weaving related ideas together, and arranging and orchestrating songs to work for the same sort of chorus and orchestra that Handel used. A number of these collaborations turned out to be dead ends, which was to be expected. And none of them were easy, as we met on Zoom as total strangers from different worlds, trying to heal the wounds of racism through song. But when the process worked, it was electrifying, and I knew then that we were at the start of something transformational.

We’ve come a long way, having assembled most of the team of Many Messiahs and written about a quarter of the music that will eventually fill a concert program. Friends and family stepped up early with funding so the artists could be paid to write and record their demos, and generous donors heeded the call to sponsor the first gathering of the artists in Brooklyn. I serendipitously connected with IndieFlix, a Seattle-based organization that makes and distributes films for social change, and they have taken Many Messiahs under their wing, even producing a mini-documentary about our origins. Early Music Seattle stepped up with substantial support when we needed it most, a gift offered with trust and openness that has allowed us to follow our own long, winding process.

We are still deep in the wilderness, probably two years out from being ready to perform in great concert halls with major symphony orchestras, with no certainty that they will even give us a shot. But I know that I am not alone, and I cannot wait for the world to know more of the artists who are the lifeblood of Many Messiahs: Taína Asili, Darian Dauchan, Michiko Egger, Stephanie Anne Johnson, Rob Jost, Sonny Singh, Curtis Stewart, and others whose roles in the work are still coming into focus. We are preparing the way, and we can see what Michiko sings of as “the Zion of our dreams”—distant but reachable.