Tomoko Sugawara is an historical harp specialist living in New York City. She teaches and performs internationally and is a co-founder of the Eurasia Consort. Ms. Sugawara, frustrated with online performances that rely on musicians recording separately to click tracks or other pre-recorded material, is exploring new ways to make online performance interactive and natural.

On March 19th, I presented a concert sponsored by Country Dance New York called “The Sound of Five harps, III”.  I played a Modern pedal harp, a Baroque Triple harp, an Irish harp, a Renaissance harp and an ancient Asian harp, known as Kugo.  It was my third concert in the series, presented in the midst of the pandemic, and this time I collaborated with Lisa Terry, a masterful player of the viola da gamba.

It was an online concert, but I didn’t want to present it the way musicians often handle this situation: one player first records his/her part, and the second player listens to it and adds his/her part. In my opinion this approach results in something that is not comfortable for me, because the musicians cannot really respond to each other in a natural way.

Lisa and I had worked using programs designed for interactive online music performance,  JackTrip and JamKazam.  For this concert we used JamKazam.  But even with the program working properly, we found the latency (time lag between our two audio signals) intolerable in the final JamKazam recording.

To get around this problem I decided to work this way: we played together through JamKazam and at the same time, we recorded ourselves individually on our home equipment.  Then later I edited the two parts together using Adobe Premiere Pro to adjust for latency. The results were acceptable, see the video below.

Fortunately, we could work this way because both of us live in New York.  If we had resided on the East and West Coasts, it might be more difficult to perform together through JamKazam or JackTrip.

Still, I dream of playing online with video and sound even with Japanese musicians!  For that, we have to await more advanced technology. 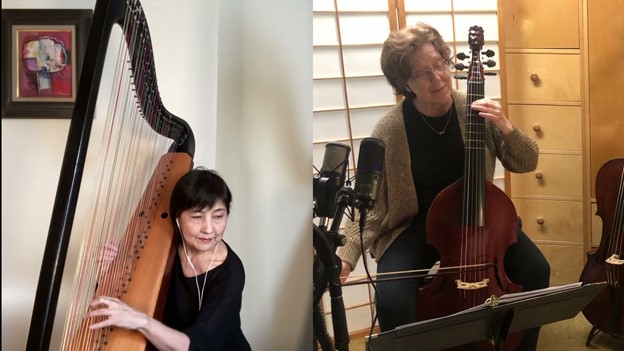 See the video with Tomoko Sugawara and Lisa Terry.: