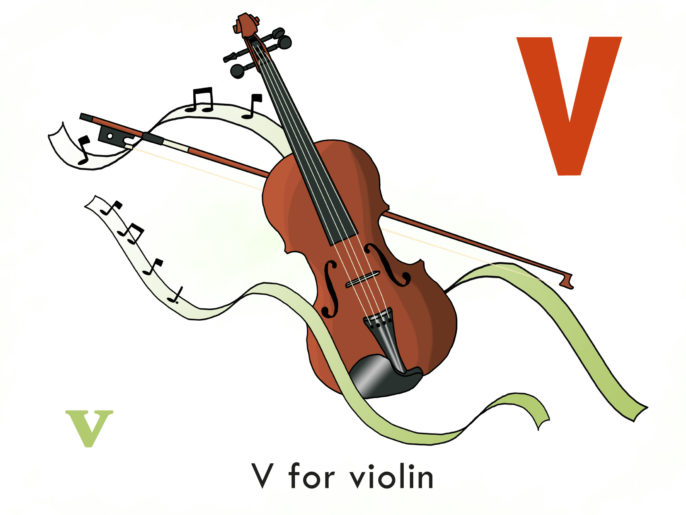 There are two kinds of violin teachers. The nice ones, and the excellent ones. That’s what I used to think.

Mine was stern and proud. By my best guess, Mrs. Meyers can’t have stood in all her height, 5 feet tall, even with the practical ergonomic clogs she wore to teach at school. She wore clean black slacks and sweaters with quarter length sleeves, and she wore her brown hair in a neat, no-nonsense bob. From the time I was in fifth grade, she taught the orchestra class at my elementary school, where most of us were touching our instruments for the first time in our lives. She taught us the most fundamental basics of playing an instrument, starting with posture. It was truly endless: back posture, shoulder posture, wrist posture, neck posture. Neck posture! It was the first time I had ever thought about my neck’s posture in my life, and I haven’t stopped thinking about it since — perhaps one of the maladies of growing up, and working a desk job. She would say that the bow grip should be natural, but strong. Somehow, it should be flexible, but controlled, and delicate, but firm and all other manner of impossible oxymoronic sets of adjectives. When I first met her, I was so young that I couldn’t even guess what age she might have been; I thought she might be eternal, in the way that children imagine adults to have always existed. She had the kind of presence that had all my classmates straightening their backs and lifting their elbows before she had even come to inspect the row for form.

Eventually, she moved on to teaching middle school orchestra. During class, she stood on a podium, as all conductors do. I never felt that she needed that podium to be obeyed, but she did use it everyday. Perhaps she used it literally to be seen above the heads of her students who might, at that time, have been cresting into puberty, and suddenly finding themselves taller and yet still somehow smaller than Mrs. Meyers. Also, Mrs. Meyers rarely raised her voice. She didn’t have to. What amplified her voice was the silence around it. She never rose above the fray so much as the fray spread respectfully around her. As such, the podium is an integral tool in orchestral conducting for two groups of people: tiny women like Mrs. Meyers and regular sized folks with thinner, more reluctantly-obeyed voices. Sometimes, seeing students walk up to that podium was like an optical illusion by which my fellow students grew and grew until finally, their shoulders grazed the top of Mrs. Meyers’s head, dwarfing her, against all law and reason. After borrowing rosin, or asking for a hall pass, the student would return to their seat, shrinking back again to the size of a normal pupil, and order would be restored with Mrs. Meyers towering above our noise once again.

Mrs. Meyers was also a person who believed implicitly in our potential. We were not especially talented children. Actually, anyone who has seen any middle school orchestra perform can tell you that, but Mrs. Meyers had this selective blindness toward our limitations. She believed that with enough time, and proper form, that we could really make some tolerable music. (For reference, “tolerable” is very high praise for middle school orchestras). She would have the gall to be disappointed in us for how little we practiced and how long it took us to nail bowings, as if any seventh grader had that kind of discipline. And yet, the more she expected us to be, the more we became. We were always the best ensemble at district festivals, which I think was, at least in part, a result of this intolerance for the mediocrity of childhood carelessness. She demanded that we love music just as she loved music, and so we did. Once, she noticed a classmate of mine, Hope, had painted her fingernails a bright color — I think pink. They were long and glossy, and they were looking for trouble. That morning Mrs. Meyers, lectured my class for some time about how a proper violinist should never wear long, painted nails. That they would damage the strings and ruin the form of the fingering hand. That they would scrape the fingerboard and flatten the posture of the second knuckle, rolling the contact point to the flatbed of the fingers, and that any decent musician would do well to remember that fact. I don’t remember how long she went on about this, but it was long enough for Hope’s cheeks to turn the same color as her nails. They were stripped and trimmed the next day, and her technique was better for it.

In high school, I became good enough to take private lessons with Mrs. Meyers —  she only accepted advanced students. We met once a week in her carpeted music room, whose windows spanned the whole north wall overlooking her driveway, and whose west wall was stacked with sheet music on good, sturdy furniture. This room was a lush ecosystem with its own distinct smell, sunshine, and flora. It even frequently had fauna: a little black cat, which would bat at stray bow tips, as if to remind me that instruments don’t belong in kicking distance. Even Mrs. Meyers’s cat believed that a good musician should respect her instrument. In the wintertime, I walked to her house after school, winding my way behind the baseball field, through snow and wind. By the time I got to her house, my fingers would be thoroughly slow, and we would play scales to thaw them through, but once fingers go cold-slow, they are reluctant to return. She told me in my sophomore year that for the winter, I could go to her bathroom and run my hands under the sink in warm water to help me loosen up before lessons.

Those bathroom trips, small moments of espionage, felt illegal. It hadn’t occurred to me that the great Mrs. Meyers would use air freshener and cran-apple gentle foaming hand soap after she did her business. I had never wandered from that front room before, and was shocked to find that more rooms existed that were not the music room. Once, on my way back from warming my hands in the bathroom, I saw Mr. Meyers asleep on the couch with an open newspaper sagging across his chest. It was like seeing Santa’s wife, or the Nixon papers. I warmed my hands many times in her home after that. When they started to salt the roads for snow, I took my shoes off so I wouldn’t track in the salt, and I walked down her hall in just my socks, sometimes bending to pet her cat in the hallway. Maybe it was after this, that I started noticing her neat black slacks shining with thin little wisps of black cat fur.

Once, while taking a break during a summer lesson, Mrs. Meyers told me that she and her musician friends would meet sometimes in the afternoon, and sit around, sight-reading simple Mozart quartets, drinking wine and eating cheese, and I thought that sounded wonderful. I told her that I’d like to have musician friends one day to sight-read Mozart and sip wine with. She said, kindly, that I would need to have a better eye for rhythms to do that, and so slipping out from our little reverie, we went back into my etudes.

My violin teacher was excellent. Even now, years after our graduation, my friends and I still talk about her when we meet up. We laugh about how strict she was with the students who didn’t or couldn’t give their best to the music. We talk about how much we miss playing with each other, and we talk about how out of practice we are. We wonder if the new orchestra teacher has pink cheeks and smiles forgivingly when her students come to class with painted nails and no pencil. We wonder if her students remember orchestra as their favorite class from childhood. We wonder if they are any good. There is no doubt in my mind that Mrs. Meyers is the singular force behind my continued love and talent for music and musicianship. I still play, and I owe her a lot of the joy that my life contains. I owe her my immaculate playing posture, and my ability to enjoy Mozart. I owe her some of my best and oldest friends, who I met in her classes, and many of my new ones, who I met in adult ensembles in Seattle. I owe her a great deal.

One year after I graduated from high school, Mrs. Meyers retired, and divorced Mr. Meyers. I started to write her a card, but I never finished it. I thought about everything I wanted to say to her, and then I realized that I didn’t even know what to call her. I didn’t even know her last name.

Here is the kind of simple, lazy Mozart piano trio that I imagine Mrs. Meyers would play with her friends on summer afternoons with wine and cheese. Mrs. Meyers was always a fan of simplistic beauty.