To understand the historical evolution of music in the West, we must first look at what happened in ancient civilizations. Ancient Greece was the main culture which not only shaped aesthetics but also the musical system ubiquitous in the West, which was later enriched or modified by the Roman Empire and later by Christendom. The thinking, the theory and the musical organology developed by this civilization influenced, not only Western music, but also that of other Eastern cultures such as the Arab and even those in Asia.

This is the first in a series of articles in which we will try to explain how the Greek musical system developed. First of all, we must understand Greek civilization as encompassing not only the Greek peninsula but also the Aegean islands, much of Asia Minor, southern Italy, as well as Sicily and the colonies around the Mediterranean and the Black Sea — as seen in the map below.

We have numerous images of this ancient culture, as well as a few instruments which have been preserved, writings on the objectives and effects of music, theoretical writings on the elements of music and more than forty musical examples in a notation that we can read.

Yet, as we delve into the study of Greek music, the main problem we find is that of sources. Although the texts and data on Greek music that have reached us are very numerous, those that speak of musical practice and interpretation are very scarce, so they prevent us from getting an idea about how that music should sound. On the other hand, most of the treatises and writings on musical theory and thought that we know are after the second century AD, and are more related to mathematical and philosophical speculation than to practice.

The first sources that reach us are mythical. There are in Greek mythology a great variety of stories in which music is the main protagonist. It is difficult to discern what historical truth these stories can contain, but they allow us to glimpse and conclude that for the Greek musical base the contributions of the Egyptian, Syrian, Phoenician and Middle Eastern peoples were very important, as we can see in the use of instruments such as the harp, drums, tambourine, zills and cymbals. 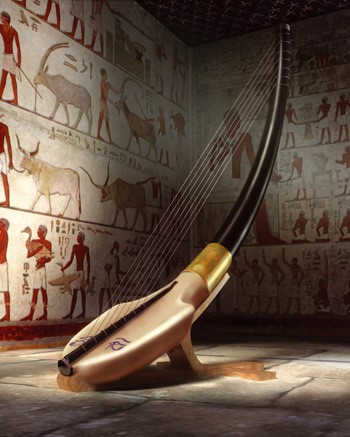 On the other hand, we have numerous organological remains found in archaeological excavations, as well as reliefs, sculptures, mosaics and paintings that show us the importance of music in these societies as we can see in the following images, about which we will discuss further in future articles. In the first image, we see a lyre associated with the god Apollo, and on the second one we see a man interpreting the aulos, an instrument associated with the god Dionysius. 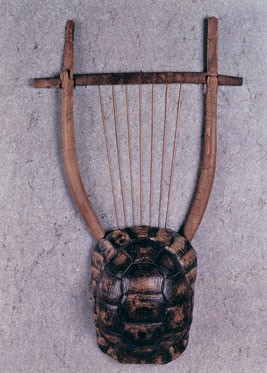 Quelis — a musical instrument at the British Museum 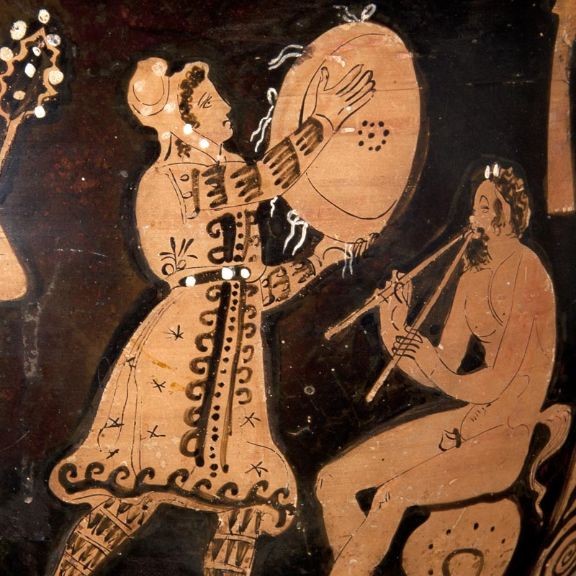 For the Greeks, musical theory and practice were different aspects. In this case, theoretical knowledge was not a means to approach or practice, but an end in itself. As we have already mentioned, there are no known composers prior to the 3rd century BC and the musical examples that have come down to us are very few and almost always incomplete. However, we do know and have a lot of information from the theorists.

Among the main theorists, in the first place we must highlight Pythagoras of Samos (6th century BC), as both he and the Pythagorean school form the basis of Greek musical thought. The basis of Pythagorean thinking boils down to numbers. We know, thanks to Damon and many of his disciples, that Pythagoras carried out a series of experiments with sound objects, discovering the three basic intervals of Greek music theory .

According to legend, one day Pythagoras passed near a forge. Inside, the men were hammering on the anvil and their blows raised different high pitches. Pythagoras quickly discovered that the larger hammer produced a lower note than the smaller one. Then he began to perform experiments. He picked up two hammers, one weighing twice as much as the other, and struck them on the anvil. An octave was produced (equal to a distance of eight tones). Pythagoras thus discovered the mathematical-numerical ordering in music and the succession of the intervals within an octave.

Pythagoras discovered the intervals by measuring chords; depending on how he divided the chord, he got a certain interval: 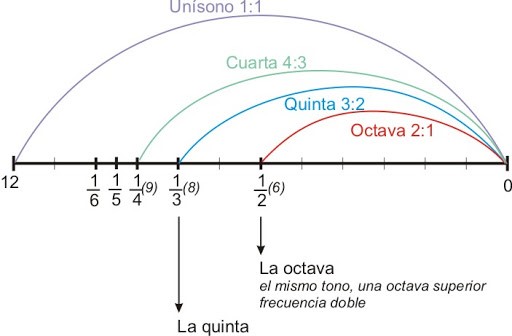 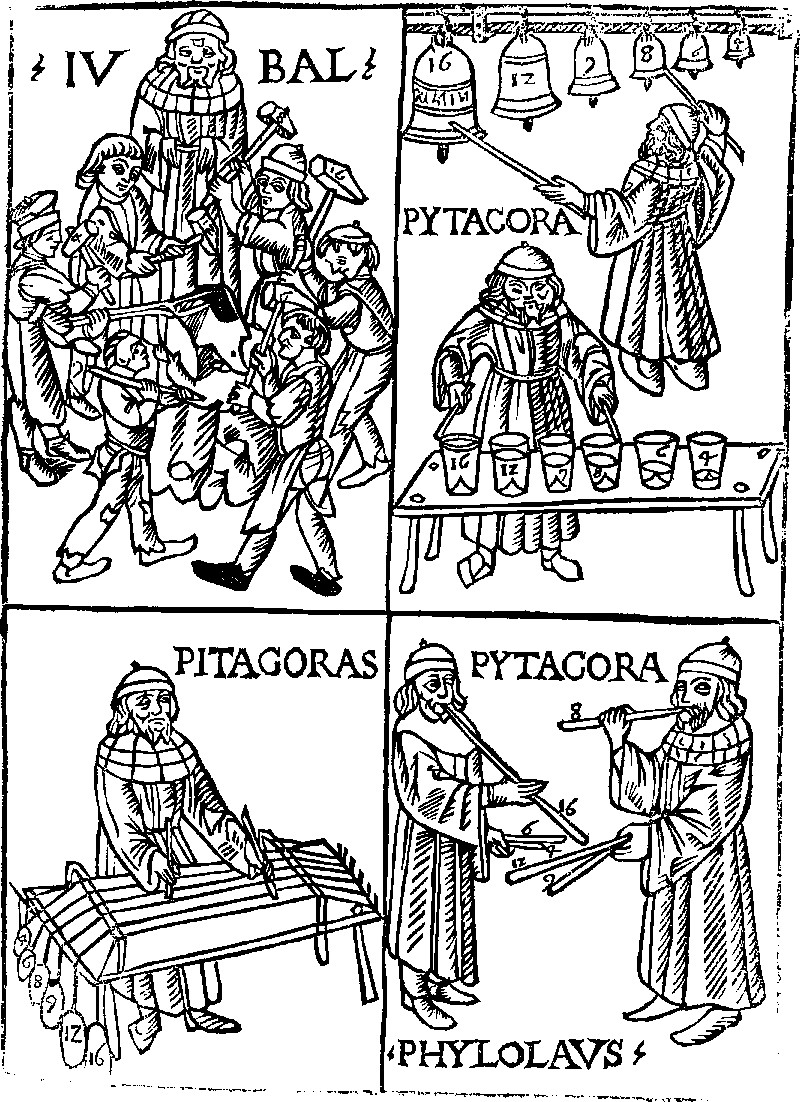 These proportions create the series 1: 2: 3: 4, whose sum is 10, and which for the Pythagoreans represented perfection, and was symbolized graphically in the τετρακτύς (tetraktys). This symbol and theory were later used by various theorists or congregations. 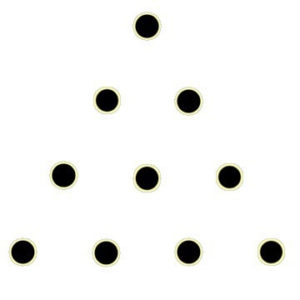 Graphical symbol of the Tetraktys

On the other hand we have Damon of Athens, one of Socrates’ teachers. He is considered one of the first theorists who establishes a relationship between music and the character and will of man, which will be called Theory of Ethos. Within this theory, we must also mention Plato and his disciple Aristotle, who will refer to the importance of music within the educational system since it contributes decisively to the ethical formation of the citizen.

In our next article, we will explore the fundamentals of Greek Musical Theory. 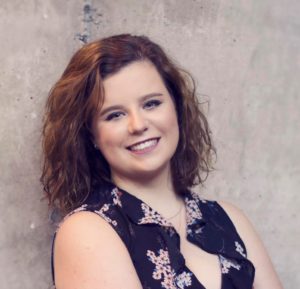 Cristina Serra de Torres (Andújar, 1995) has a degree in Musicology from the University of Granada and a Master’s degree in Music Patrimony from the International University of Andalucia, and is beginning her PhD studies centered around gypsy flamenco genres in Granada. She is a singer and cellist. At age 3, she began her studies in classical, bolero and flamenco dance. While her research is focused on Flamenco and Blues, she has a background on the analysis, harmony, transcription, edition and interpretation of Early Music. Currently, she lives in Granada, where she teaches singing, musical language, music history and appreciation, does research and produces the Spanish language podcast “Música con mucha Historia”.