Many of us grew up saying Grace before our family meals, and many of us still do. But how many of you sang Grace or gave thanks in song after you had eaten? And in four- or five-part polyphony?

Beautiful musical artifacts scattered in museums on both sides of the Atlantic give us a peek into this practice during 16th-century dining rituals – two sets of large cutting/serving knives with musical inscriptions for various voices that, when sung together, yield lovely little polyphonic settings — on one side, a Benediction to bless the table before the meal, on the other side, a Grace for after the meal. 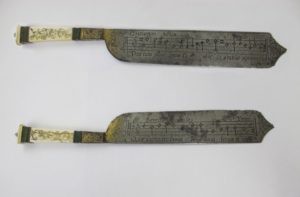 (Today we say Grace before a meal, and think of Benedictions coming at the end of a sacred work.)

In total, fifteen such knives have been located by Flora Dennis, from whose article ”Scattered Knives and Dismembered Song: Cutlery, Music and the Rituals of Dining” I shall be quoting. One can be found in the Victoria & Albert Museum, London, seven in the Musée national de la Renaissance, Ecouen, three in the Philadelphia Museum of Art, two in the Gemeentenmuseum in The Hague, one in the Stadtmuseum, Steyr, and one in the private collection of J. Hollander, Antwerp. Others have been pictured in 19th-century publications.

The knives are lovely to look at. Many of their handles are “made of ivory, with bands at the upper and lower ends of green stained horn and bone, separated by thin shims of copper or brass. The engraved decoration on the broader ivory faces is filled with a black inlay and depicts a variety of coherent motifs: scrolling foliage, arabesques, swags of leaves and fruits, empty cartouches, winged cherub heads, trophies, and masks. Three knives have plain ebony handles, one appears to be of hardstone.”

“The distinctive profiles of the blades of the music knives may relate to an original intended function of carving [and] presenting meat, or may act as symbolic referents to these acts. The varying patterns of wear visible on them today suggest that some were indeed used.”

The two texts are:

Benedictio mensae: Quae sumpturi sumus benedicat trinus et unus. — The Blessing of the Table: May the three-in-one [Trinity] bless what we are about to eat.

Gratiarum actio: Pro tuis deus beneficiis gratias agimus tibi. — The saying of grace: We give thanks to you, God, f or your generosity.

We can tell that all of these knives were originally parts of two functioning sets of knives, because different pieces of music appear on them. The knives were probably made in France, possibly for an Italian patron or patrons.

Dennis observes that “the act of blessing the table at the beginning of the meal and giving thanks to God at its conclusion imbued the experience of eating with a sacrality that drew parallels with the mass. It also formed a means of separating the act of collective eating from the rest of the day.”

Two of the knives – both of which bear Bassus (bass) parts – have the same heraldic device and Latin motto at right angles to the horizontal musical text. On the Grace side appears the text Infracta virtus ad sidera tendit (Unbroken virtue tends towards the stars). The appearance of this motto on two Bassus knives indicates that one owner possessed multiple examples of the same voice part, implying a doubling of voices in sung performance. 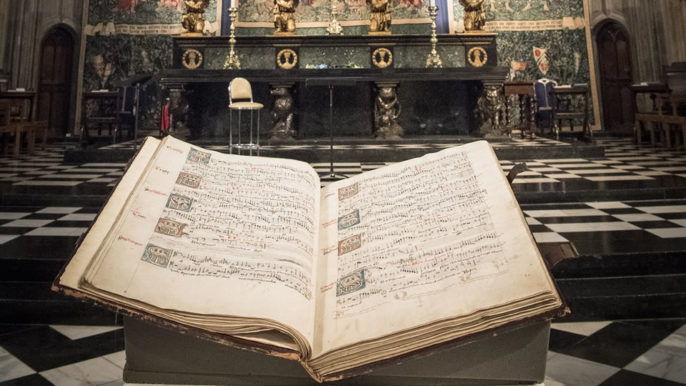 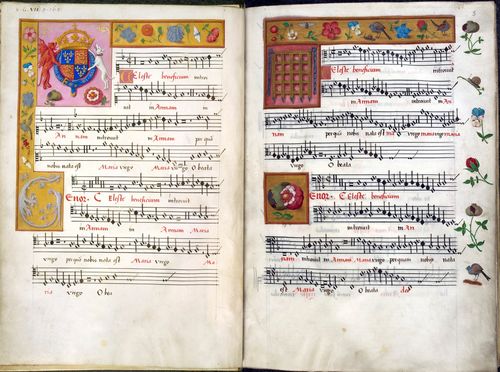 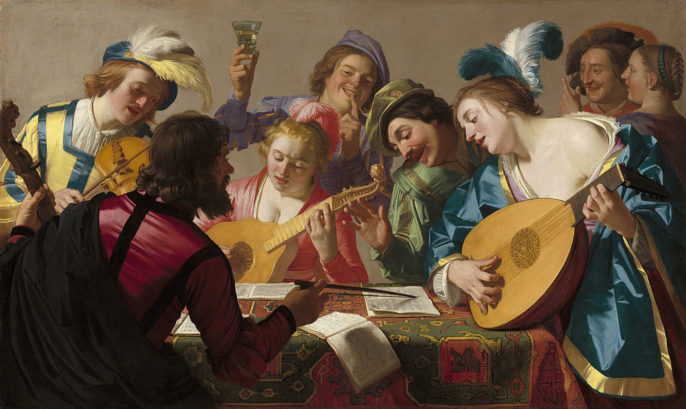 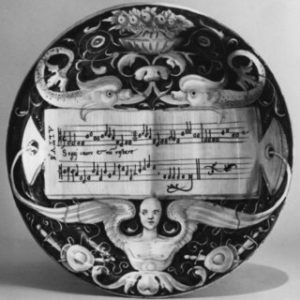 Sacred polyphony in the Middle Ages and Renaissance was sung by choirs looking down upon a single, central choirbook, in which all voice parts were written, one after the other, on a double-page opening.

With the invention of music printing, polyphonic music, both sacred and secular, began to be published in sets of separate partbooks, each containing a single voice (see Attachment 7).  The musical knives follow this manner.  (The first book of polyphony using movable type was issued in Venice by Ottaviano Petrucci in 1501.)  Musical inscriptions of single parts also begin to appear on majolica ware during the sixteenth century (see Attachment 8, where an Altus part is given).

The music on the knives is predominantly syllabic settings (see Attachments 9–12). No sophisticated knowledge beyond basic musical literacy would be required to sing the parts.

The communal acts of singing and eating would constitute a unifying and binding practice, and could possibly reflect on a symbolic level a sacred or secular form of brotherhood.

You can hear the four little pieces at
http://www.vam.ac.uk/content/articles/a/a-notation-knife/

At this site you can also view a brief video about the knives, and see their true size.

Here are the scores for pieces that were prepared by Flora Dennis, with advice and assistance from Giulia Nuti and Eric Wilson.

In closing Dennis observes, “These extraordinary knives reveal the intimate connections between the sociability of dining and music, the rituals of the meal and sixteenth century spiritual belief.”

I would like to thank our dear friend Kharris Brill in Bath, Maine, for calling these unique musical artifacts to my attention.

Have a safe, healthy week full of beautiful music!