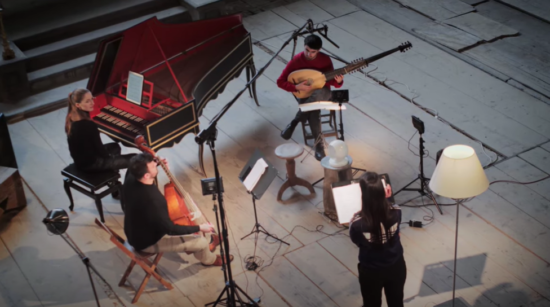 A group of musician friends, having all their concerts cancelled because of Covid, meet in the old synagogue to play together

With closed theaters and international tours cancelled because of pandemic, musicians not only lost their means of living but also a chance to share music with the public and each other. In the small gap between two lockdowns, in late October 2020, a group of friends and alumni of Schola Cantorum Basiliensis (a Swiss academic centre for early music) who usually work internationally with renowned European orchestras, met to play together a rarely performed repertoire of female French composer of Baroque Elisabeth Jacquet de la Guerre. Read complete story…

Mezzosoprano Margarita Slepakova, violinist Elena Abbati, viola da gamba player Teodoro Baú, lutenist Pablo FitzGerald and harpsichordist Weronika Kłosiewicz, all coming from different countries, met in Basel during their studies of early music performance practice in Schola Cantorum Basiliensis, a renowned music academy and research center for early music. During a normal active concert season they work separately with European orchestras and ensembles but during covid-times all of that came to a halt which not only resulted in them losing work but also having a chance to share music with life audiences and fellow musicians. Using the gap between two lockdowns they decided to finally meet to play music together and record it, not knowing when will be the next time they will have a chance to be on stage. They chose a rarely performed piece from the Baroque era composed by Élisabeth Jacquet de la Guerre (1665-1729), a French harpsichordist and composer of the court of Louis XIV and one of the first female composers in music history to have her work published.

The video was shot and recorded also by their friends: cinematographers Wawrzyniec Skoczylas and Tomek Ebert and sound engineer/viola da gamba player Leonardo Bortolotto in a beautiful venue of an old, vine-covered synagogue which was saved from being demolished by Daniel Chiquet, Mimi and Willem von Moos (www.le-ventre.net), a group of artists who dedicated this space for art and creative activity