We are proud to partner with Miyo 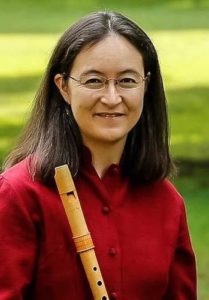 Miyo Aoki is a gifted recorder player who has played all over the world and is one of the talented teachers in our education program who brings music to Seattle public elementary school students through interactive performances and the formation of recorder clubs.

We sat down recently with Miyo and spoke about early music. Watch the full interview or highlights below.

The role music plays and how it’s important now more than ever – part 2.

The challenging and exhilarating parts of being a musician. Watch here…

The importance of music in a child’s education and thanks Early Music Seattle supporters. Watch here…

Challenging her own definition of early music. Watch here…

Miyo Aoki is a dedicated recorder player and teacher, performing music ranging from medieval to modern and teaching students of all ages and levels. She has performed in the US, Germany, and Poland, with groups including Farallon Recorder Quartet, The Eurasia Consort, Utopia Early Music, and Gamut Bach Ensemble; and at the Bloomington Early Music Festival and Whidbey Island Music Festival.  She has premiered works by contemporary composers Natalie Williams, Agnes Dorwarth and Adam Haws, and recently she was delighted to play with the Boise Philharmonic, Seattle Symphony and Oregon Symphony, respectively, in performances of Harry Potter and the Prisoner of Azkaban.

Miyo holds a KAZ Diplom (Artist Diploma) from the University of the Arts in Bremen, Germany, where she studied with Professor Han Tol. While living in Bremen, she also maintained a private studio and worked in the musical outreach program “Musik-im-Ohr”, based in the Bremen concert hall, Die Glocke. She holds degrees in both early music performance and mathematics from Indiana University, where she studied with Professor Eva Legêne and received the Austin B. Caswell award for her paper on Ars Subtilior music. Miyo is a strong proponent of music education and strives to make music accessible to people from varied backgrounds. She has collaborated in planning and performing several outreach programs for children, including “Shakespeare’s Ear” and “Oskar und die Blockflötendiebe”, and she founded a successful elementary school recorder club program sponsored by Early Music Seattle. In addition to her teaching work for Early Music Seattle’s outreach programs and private lessons, she teaches regularly at workshops such as the Port Townsend Early Music Workshop, SFEMS Recorder Workshop, Next Level Recorder Retreat, and Hidden Valley Early Music Workshop. As of 2019, Miyo also directs the Fall Fipple Flute Forum; a recorder workshop held in Seattle.

Read more about Miyo on her teacher page