“Brilliant, dazzling, great sound, gorgeous expression and variety.
I especially enjoy your ever-present agogic sensibility, and learn a great deal from it.”

The release of a new CD is always a significant event in the life of a musician and a special source of joy for the musicians’ friends and followers. Such now is the case with Jillon Stoppels Dupree’s new recording on the Centaur label, J. S. Bach: Fantasy and Caprice, which offers a sampling of the master’s virtuosic keyboard music from his earliest pieces through to his years of maturity. Right out of gate we are treated to a splendid performance of Bach’s famous Chromatic Fantasia and Fugue in D minor, BWV 903, followed by the Toccata in G minor, BWV 916—which is actually a three-movement sonata—and the Toccata in D minor, BWV 913—which is indeed an improvisatory work. Between these two opuses of toccatas Jillion has placed six solo harpsichord movements adapted from two of Bach’s 1720 solo violin sonatas—the five movements of his Sonata in A minor, BWV 1003, here in D minor, and the Adagio from his Sonatas in C major, BWV 1005, here in G major. We know from his student Agricola that Bach performed these arrangements on clavichord, and it is likely he made them himself during his Leipzig years.

The album, which is available on YouTube, provided by NAXOS of America, closes with the Capriccio sopra la lontananza de il fratro dilettissimo (“On the Departure of a Beloved Brother”) in B-Flat Major, BWV 992, a little gem that has been a favorite of mine since undergraduate years. A fresher, more engaging piece is hard to imagine.

Here I shall briefly turn you over to Jillon, who writes in her liner notes [with slight additions by GB]:

Bach’s only surviving programmatic instrumental piece is also one of his earliest works. The Capriccio supposedly tells the story of the departure of his brother [Johann Jakob, an oboist] to join the army orchestra of Charles XII of Sweden, when Bach was about nineteen. However, respected Bach scholars Christoph Wolf and David Schulenburg suggest that the title could also refer to a separation from a close friend, or even Bach’s own departure to a distant land

The work has charming descriptive titles for each movement, yet the true appeal is in his musical depiction of a wide array of emotions: the tender sighs of supplication as his friends plead with him to stay [I]; the dissonances and remote keys depicting their fear of what could happen to him [II]; the discordant wailing of their lamentation [III]; the harmonious resolve of their inevitable acceptance [IV]; then the triumphant heralding of the post carriage [V] followed by a double fugue on the post horn theme [VI]. Even in Bach’s relatively inexperienced, exuberant youth, he was masterful at conveying through music the soul’s various passions, which he had already come to know in his brief life and we continue to experience for years to come.”

The chosen tonality of B-flat major (“B dur” in German) may be a reference to the Bach family’s name. The traditional story of this work would place its composition in Arnstadt. But Christoph Wolff has pointed out that the term il fratro—not suo fratello, as the work has traditionally been entitled—deriving from the Latin frater, “may pertain to any kind of fraternal (professional) relationship.” Thus, it could denote any close friend or classmate, and it has been suggested that the Capriccio was written to commemorate Bach’s graduation from school in Lüneburg in 1703 and the parting from the friends he made there. 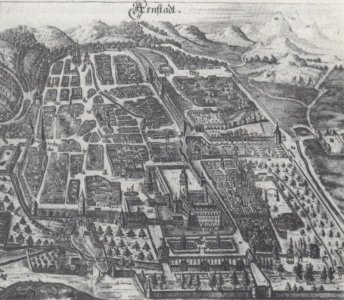 I. Arioso. Adagio. Ist eine Schmeichelung der Freunde, um denselben von seiner Reise abzuhalten (Is a coaxing by his friends to dissuade him from his journey): https://www.youtube.com/watch?v=vxA9DqODozk

This overture is a model of motivic variation and structural balance, almost as if it were a thoroughly prepared student exercise:

And onward the piece proceeds in stately little units, on permutations of the head motive, soon returning to B-flat major for a codetta of “coaxing” gestures, rising as if intensifying pleas.

II. Ist eine Vorstellung unterschiedlicher Casuum, die ihm in der Fremde könnten vorfallen (Is a picturing of the various calamities that could befall him in foreign parts): https://www.youtube.com/watch?v=m4qW3Ji2SIQ

The opening melodic gesture—the subject of this four-part fuguetta—immediately “befalls” onto a chromatic pitch, signaling the dissonant harmonies that permeate this anxious piece.

A passacaglia in F minor, built on a descending “lament bass.” As Benjamin Pesetsky observes, “the harmonies are marked only in figured bass—essentially the chord symbols of the time—encouraging the performer to improvise or elaborate.”

A series of six chords, leading in bold rhythm through E-flat major to A-flat major, establish the friends’ resolve. The rest of this interlude is based on rising and falling variants of a descending eighth-note head motive first heard after the chords.

A chipper opening melody is followed by quick octave leaps delightfully mimicking the post horn’s characteristic octave jump. An inversion of the opening melody plus more octave jumps and a closing bar, again followed by octave jumps, close the “a” section of this little binary unit. As required, this all is repeated before we proceed into the “b” section. 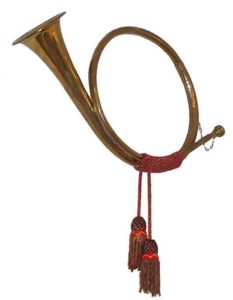 The culminating fugue is the one larger-scale movement in this set. Its main “subject” is a lengthy post horn call that ends in a galloping rhythm; its countersubject is the quick octave post horn leaps already referenced in the previous movement.

I hope listening to Jillon’s performance of this engaging set of little pieces will be as much fun for you as it has been for me.

NOTE: To order a copy of Jillon’s new CD from Centaur Records, you may visit the following websites: