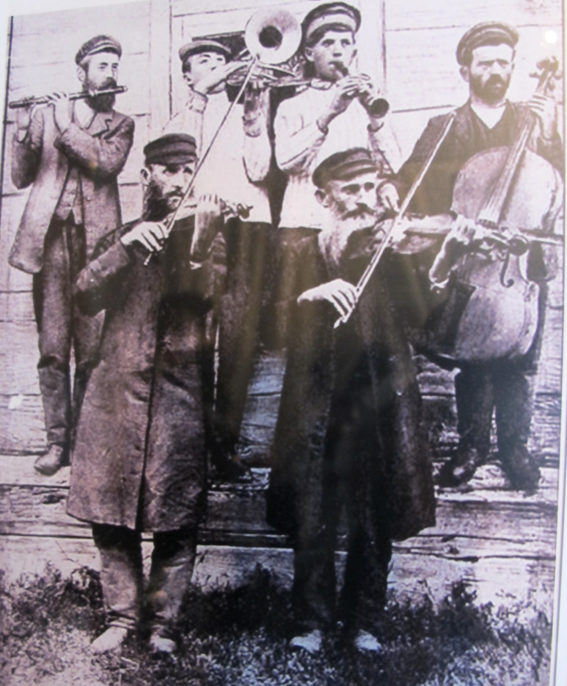 Klezmer is the traditional music of the East European Jews. Now a popular folk music in many parts of the world, over the centuries klezmer has experienced quite some transformations—at times almost disappearing, but then coming back with remarkable resiliency.

Ashkenazic Jews brought music with them as they migrated from central Europe to Eastern Europe, roughly between the 13th and 16th centuries. Early documentation of Jewish musical guilds in Prague dates as far back as 16th-century. Until the Holocaust, klezmer was played for weddings and other simkhes (celebrations).

For several centuries, violin and tsimbl (hammered dulcimer) were the dominant instruments of klezmer. In the 19th century wind instruments, drums, and accordion were introduced, and at times ensembles grew to 10 or 15 members.

Klezmer music is instrumental; Yiddish folk songs are not traditionally part of the genre. There is discussion as to whether klezmer music was even folk music in the old country, as the performers were primarily professionals.

Klezmer ensembles were traditionally dynastic, with leadership by a kapelmeister handed down within one family. Some klezmer dynasties were tied to Hassidic communities. The klezmorim (plural of klezmer) sometimes doubled in other trades when income from music was not sufficient.

Over the centuries the repertoire of klezmer music, with both dance and listening pieces, grew to become quite rich. Musicians were engaged for bar mitsves, circumcisions, and Jewish holidays. And the more well-reputed klezmorim were sometimes hired to play for nobility among the Christian communities. In some places, Jews collaborated with Romani musicians.

The centerpiece of klezmer performance was the wedding. For a well-to-do family, a kapelye (klezmer band) could be engaged to participate for several days, performing at some times solemn listening music, and then moving into rousing dances, with ritual components all along the way.

Historical developments in the late 19th century had as much impact on Jewish music in Eastern Europe as on many other aspects of Jewish life. With the end of the Austro-Hungarian and Russian Empires, the devastation of World War I, and wider openings for assimilation, East European Jewish observance of traditional life events declined. For the first time, Jewish musicians with talent had the opportunity to study classical music in conservatories. The massive emigration to the Western Hemisphere also took its toll—and the Holocaust all but finished off klezmer in Europe.

Meanwhile, the genre could be said to have taken on a new “incarnation” in the United States—especially in the larger eastern cities—and a few other countries. The repertoire already having been simplified and trimmed down in the old country, in America a smaller list of dances was employed for less elaborate celebrations. Older dances disappeared and the sher, the Moldovan bulgar, and a few other dances took primacy—and the tempos, in keeping with the pace of life in the cities, sped up.

With the Great Depression, the end of new musical influx from Europe, and especially with assimilation, klezmer music seemed to disappear after World War II. It never quite vanished, and some of the old-time performers and a post-immigrant generation hung on. But it was no longer played at Jewish weddings.

Then in the mid- to late-1970s klezmer experienced a revival—many prefer the term “revitalization”—among the baby boom generation of people who were looking for roots they could identify with, at times in lieu of an Israeli/Zionist orientation. The music caught on, propelled at first by the duo Andy Statman/Zev Feldman and bands such as the Klezmorim, Kapelye, Brave Old World, the Klezmer Conservatory Band. This “third incarnation” of klezmer musicians had the benefit of learning from a few surviving old-timers such as Dave Tarras (1897-1989), Leon Schwartz (1901-1990), Sid Beckerman (1919-2007), and the Epstein brothers.

Until the period of revitalization, the word “klezmer” only referred to the musician. In the 1970s some scholars and musicians began to refer to “klezmer music” as well, and this sense of the term caught on.

In the mid-1980s the New York-based Klezmatics heralded a new wave of klezmer music, incorporating jazz motifs, the shining vocals of Lorin Sklamberg, and a progressive, queer-friendly orientation. These elements helped klezmer quickly gain popularity among younger listeners in many parts of the world, and helped cement klezmer’s position as a contemporary genre that transcended old boundaries.

In more recent years, however, the term “klezmer” has come to be a catch-all, with more usage and less meaning. Some people advocate using the term “East European Jewish music” instead—or even calling it “New Jewish” (or “Newish”) music.

New York Klezmer in the Early Twentieth Century: The Music of Naftule Brandwein and Dave Tarras, University of Rochester Press. By Joel Rubin.

A few other resources:
The Klezmer Institute: Advances the study, preservation, and performance of Ashkenazic Jewish expressive culture through research, teaching, publishing and programming.

Klezmershack: not up to date, but compendious portal and blog on klezmer.

Peter Lippman is active in Klezmer and Balkan music in Seattle. He founded Seattle’s first klezmer group, The Mazl Tov Klezmer Band, in 1980.