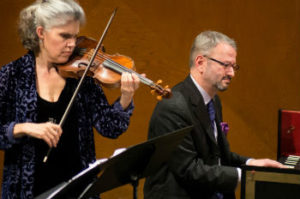 I’d like to share with you two performances by two of the jewels in Seattle’s illustrious early music crown — violinist Ingrid Matthews and harpsichordist Byron Schenkman — issued on their recording in Stil Moderno: The Fantastic Style in Seventeenth-Century Italy, which presents works in the stylus fantasticus of the first half of the 17th century.

When we think of Baroque music, wonder-filled instrumental works by Bach, Handel, and Vivaldi come to mind.  But long before these masters, the violin and then other instruments emerged as featured soloists in music that virtuoso players composed for themselves to perform, pieces called Sonatas — which they did not establish as works with fixed forms, like sonatas eventually came to be, but simply as pieces “sounded” on instruments.

The roots of the stylus fantasticus are in the organ toccatas and fantasias of the early Baroque.  In his book  (1650) the German Jesuit polymath Athanasius Kircher described the fantastic style as “especially suited to instruments.  It is the most free and unrestrained method of composing, it is bound to nothing, neither to any words nor to a melodic subject, it was instituted to display genius and to teach the hidden design of harmony and the ingenious composition of harmonic phrases and fugues.”

Our first composer is Biagio Marini (1594–1663), a virtuoso violinist and prolific composer who held numerous posts in Italy, Belgium, and Germany (Brescia, Parma, Neuberg, Brussels, Düsseldorf, Padua, Ferrara, Milan) and worked with Claudio Monteverdi at St. Mark’s in Venice.  His Sonata, Op. 8 No. 4 (1629) is composed in a free, improvisatory style with many tempo changes (written Tardo and Presto, the speeds determined by the performer), sometimes imitating vocal styles (recitative and aria, with some ornaments written out, others added by the performer), sometimes very idiomatic for the violin (fast runs, double stops, leaps and large range, trills written and added by the performer, etc.).  The expressive range—from reflective recitative to energetic outbursts of virtuoso passage-work—mirrors the Italian delight in instrumental bravado.  The joy of violin-playing is evident in a style that truly is fantastic! 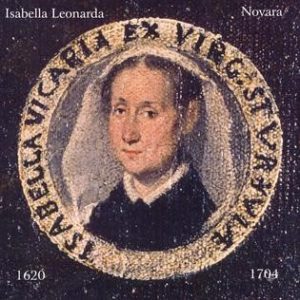 Our second composer is Isabella Leonarda (1620–1704), a nun and later Mother Superior of the St. Ursula Convent in Novara, who published over two hundred compositions in twenty different collections.  In her Sonata No. 12 the form is still very free, evolving continuously, but the sections are much longer, closer to being separate movements.  Here is their sequence:

The placement of a Gigue at the end of a sonata would become standard in the late Baroque.

The music of these two lesser-known composers is well worth your further attention.