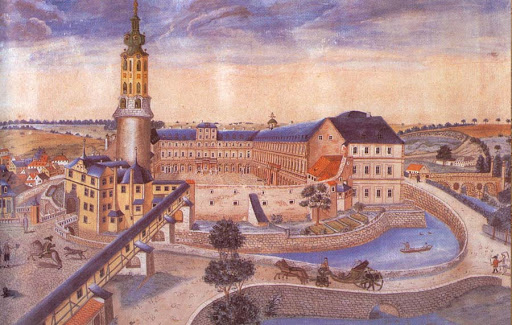 The Court at Weimar

This week I wish to feature a pair of harpsichordists recommended to me by my dear friend and neighbor in Bath, Maine, Yves Feder  — harpsichord maker, freelance audio engineer for the Yale Collection of Musical Instruments, among others, once the Music Director of Connecticut Public Broadcasting, photographer, and spouse of the harpsichordist Linda Skernick.  Yves writes that Ketil Haugsand and Marco Mencoboni are his favorite harpsichordists.  Lesser known in the United States, these two musicians are enjoying illustrious careers in Europe.

The Norwegian harpsichordist, conductor, and harpsichord maker Ketil Haugsand, who began his musical studies in Trondheim and Oslo, later pursued his studies in Prague and Haarlem.  In 1973 he was awarded the Solo Diploma and in 1975 the prestigious Prix d’Excellence at the Amsterdam Conservatory, where he was a student of Gustav Leonhardt.  Haugsand has taught at the Norwegian State Academy of Music in Oslo (1974–94) and the Hochschule für Musik in Cologne (1994–present), and is regularly invited to teach in the International Summer Courses for Early Music in Trondheim. As a founding member of the Academia de Música Antiga de Lisboa, he has led the harpsichord class at its Lisbon and Porto Early Music courses since their inception.

Since his concert debut in November 1969, Ketil Haugsand has built a career as a performing artist, both in recitals and as a soloist with orchestras and participant in chamber music. He has toured extensively in Europe, Israel, and the United States and collaborated with such artists as Jaap Schröder, Wieland and Barthold Kuijken, Marie Leonhardt, and Frans Brüggen. His duo with the American viola da gamba player Laurence Dreyfus has won international acclaim, both in concert and on CDs, as have also his recordings of harpsichord works by Louis Marchand and J. S. Bach. His record of Rameau’s Pièces de Clavecin en Concert with Catherine Mackintosh and Laurence Dreyfus (on the Simax label) was nominated for a Gramophone award.

Ketil Haugsand is the artistic leader of the Arte Real Ensemble and the Norwegian Baroque Orchestra, which has travelled to Portugal for concerts at the Coimbra Festival, one of which featured the music of Carlos Seixas (later recorded for EMI/Virgin).

To start off today, we’ll hear Ketil Haugsand perform Bach’s incomplete Suite in F minor, BWV 823, in his home studio.  A somber work, as played by Haugsand, its serious Prelude and melancholy Sarabande, with its Frenchified trills, have a calming, soothing effect— a perfect antidote for the feeling many of us are experiencing in our sad times.  Though still in minor, its closing Gigue gives us the series of little kicks we all need these days.

And here’s the perfect Bach chorale prelude, “Das alte Jahr vergangen ist” (“The old year now hath passed away”), BWV 614, from the Orgelbüchlein, one of a set of 46 chorale preludes Bach composed during his tenure as a chamber musician at the court of Duke Wilhelm Ernst at Weimar (1708–17).  Bach had originally planned a collection of 164 settings of chorale tunes, so that the congregation’s hymns could be introduced by a brief organ piece based on their melody every Sunday and holiday throughout the Lutheran Church Year.

Not a celebratory “Happy New Year” piece, this chorale prelude, like our own 2020–21 transition, “develops from the original melody, moving into haunting territory.  Amid dense chromaticism and occasional dissonances, the music drifts into a frightening and lonely harmonic ambiguity.  It’s as if we’re lost in the middle of the night in a dark forest.  In the opening bars, the top voice is shrouded in rising and falling lines in the other voices, outlining a melancholy chromatic fourth.  In the fifth bar, you will hear this rising chromatic line emerge in the top voice.  As this brief prelude develops, a lamenting conversation unfolds” (Timothy Judd, “New Year’s Hymn,” https://thelistenersclub.com/2020/01/01/a-new-years-hymn-music-of-praetorius-scheidt-and-bach/#more-15031, where you can listen to earlier choral settings by Michael Praetorius and Samuel Scheidt).

On our page of illustrations, you can see how encumbered the chorale’s melodic notes are.

Bach’s congregation would have taken the mood and pitch from his prelude and then sung the following chorale:

Of Marco Mencoboni, Yves Feder has written: “One of the absolutely most extraordinary interpreters and performers these days.  His emotional and intellectual scythe cuts right to the composer’s original inspiration and his expressivity knows no bounds.  Brilliant, brilliant, brilliant harpsichordist.”

Mencoboni, who is also an organist, was born in 1961 in Macerata. He studied with Umberto Pineschi, Ton Koopman, Jesper Christensen, and Gustav Leonhardt, under whom he graduated at the Sweelinck Conservatorium in Amsterdam in 1990. Mencoboni has dedicated many years to the rediscovery and performance of repertoire of the Renaissance and Baroque, including many long-forgotten jewels by Ignazio Donati, Pietro Pace, Costanzo Porta, Bartolomeo Barbarino, and Luigi Battiferri.

Today we’ll listen to Mencoboni’s performance of Johann Sebastian Bach’s Concerto in the Italian Taste, now known simply as the Italian Concerto, BWV 971.  This three-movement work for double-manual harpsichord was published in 1735 as the first half of the Clavier-Übung II.  Bach projects the contrasts of solo versus tutti instruments in an Italian-style concerto by creating contrasts between piano and forte manuals on the harpsichord.  The two dynamic outer movements in F major—Allegro and Presto—both in ritornello style (the opening material keeps returning in the “tutti” sections), frame a beautifully elaborate arioso-style Andante in D minor in which Mencoboni employs the lute stop for the orchestra accompaniment, as if it were plucked orchestral strings.

Marco Mencoboni has rediscovered and enhanced the “Cantar Lontano” practice, a performance practice of the Marche region of Italy in the early 1600s that placed solo singers strategically in the church space, in imitation of many choruses, to create a spectacular, widespread sonic effect.  Since 1999 he has been the artistic director of the Cantar Lontano Festival.  His Cantar Lontano Ensemble has performed at such important festivals of early music as those in Ambronay, Utrecht, Trigonale, Pontoise, Haut Jurà, the Ravenna Festival, and the Rossini Opera Festival, among others.  You can listen to two of their performances of the opening fanfare movement, “Domine ad Adjuvandum,” of Monteverdi’s Vespro della Beata Vergine (1610), the first in the Lisbon Cathedral, with singers and instrumentalists “on stage” and in the balconies surrounding the audience, and the second, a rehearsal, in the Basilica Palatina of Santa Barbara, Mantua, the church for which the Vespers likely were conceived and where they were first performed (to cut out the talking, start at 1:37).  For the Mantua performance the ensemble is using the 1565 Graziadio Antegnati organ from Monteverdi’s time (see the Illustrations page).

Those who know Monteverdi’s opera Orfeo will recognize that he has borrowed the music for “Domine ad adjuvandum” from the opera’s fanfare overture.  The ensemble Cantar Lontano has recorded and released the entire Vespers of 1610 on CD with Elucevan le stelle Records (2SACD)

Mencoboni’s experiments have led him to perform Renaissance pieces with mixing natural voices matched with the horns of seven ships in the maritime port of Ancona!

In 2010 Mencoboni began working with the Italian opera director, set and costume designer Pier Luigi Pizzi on works by Claudio Monveverdi.  His latest creation is the Canalgrande Adriatic Baroque Orchestra, composed of musicians born and raised near the Adriatic Sea, an international project that unites Italian, Croat, Slovene, Albanian, and Greek musicians.

I hope you’ve enjoyed today’s musical offerings.  Thank you so much, Yves, for calling these two masterful musicians to our attention.