In this article, which follows from our earlier introduction to Greek Musical Thought, we are going to focus on the musical theory built by the Ancient Greeks, on the formation of the modes, and on how this differs to how Greek modes are referred to from the Middle Ages to the present day. Starting from the Pythagorean proportions, the basic modal unit of the Greek system is the tetrachord, which is a set of four notes, the interval between the first and last being a perfect fourth. To understand the examples that will appear throughout the article, we must take into account that the Greek musical system is exposed in a descending way, from high to low.

It is thought that the melodies were originally limited to the sounds that made up this system, since until the 7th century the lyre was an instrument that had only four strings and that, later, Terpander increased it to 7 strings.

As we have already mentioned, the tetrachord was formed by four successions of notes arranged in a descending 4th Just interval. Of these four notes, the ones at the ends were fixed, and therefore were called ακινετοι (akinetoi) while the intermediate, mobile notes were called κινετοι (kinetoi). The latter varied depending on the genus to which the tetrachord belonged. There were three genres.

The systems are formed from these tetrachords and their genera. We should mainly talk about two of them. On the one hand we have the joint Heptachord, which is two tetrachords joined by the same note called σιναφε (synafe), that is, they share one of the two akinetoi notes, and they could be tetrachords of different genres. The upper tetrachord is called σψνενμενον (synenmenon) and the lower tetrachord μεσον (meson).

This system is completed with another interchangeable tetrachord with the superior one, called the διαζενγμενον (diazengmenon) tetrachord. This union is formed by two disjoint tetrachords, which is why a Disjoint Octachord is formed, which are united by a διαζενγεσισ (dazengisis). In addition, it should be added that the Synenmenon tetrachord had a metabole, which is an altered note and is used to modulate the heptachord system to the octachord. 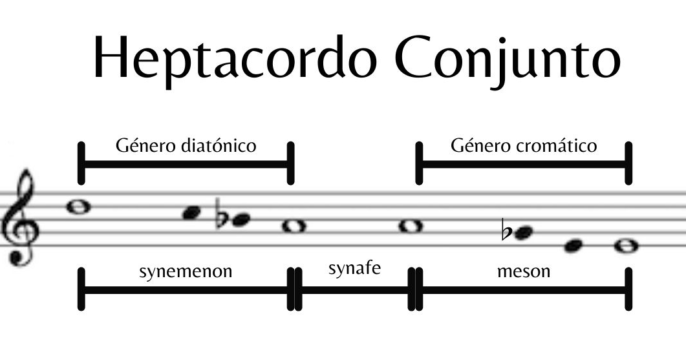 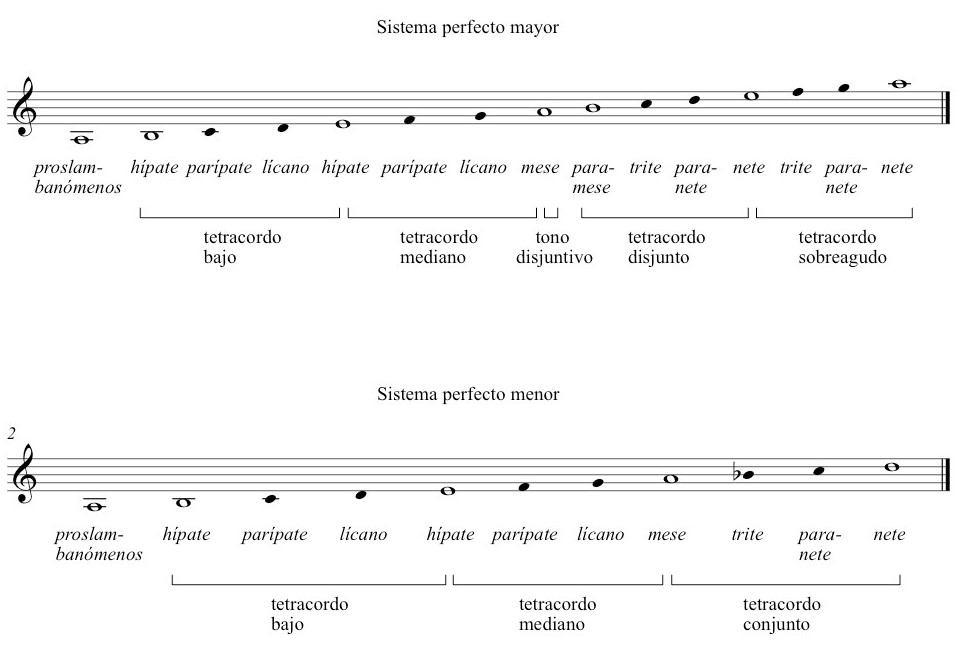 Fragments called harmoniai were extracted from this system. The term, used in classical times, meant “pact, convention and replaced nomos, which meant law.” The term designates music anchored in tradition, but in a musical sense it indicates the arrangement of intervals within a scale.

Although in Plato’s time its meaning was broader since it also referred to the height of the sounds, the color, intensity or the timbre. These harmonies received the name of allusion to the most characteristic Greek Regions. Doric, Phrygia, Lydia, and later Mixolidia will be added to it. Later, others are added by prefixing hipo-. 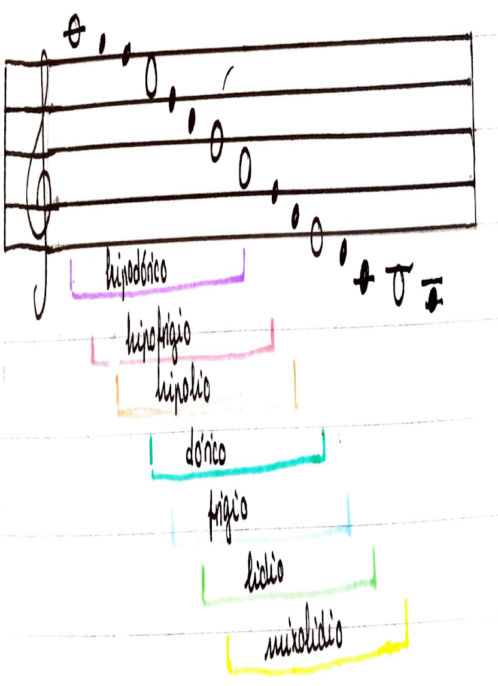 The systematic classification of harmoniai according to ethical and formal criteria constituted the basis of musical theorization from this time on, but after the classical period other terms appear, such as tonoi or tropoi to refer to harmonies simply as scales of different heights.

As we can see, at no time did we use the term “modes” in this article; Ancient Greeks used the term “harmony”. Cleónides speaks of skemai or aspects of 8th to refer to the realms of 8th within a system.

The confusion with the Gregorian modes and with the modal scales that are used today comes from the Middle Ages. In the 9th century the treatise Alia Musica appears, which identifies the eight Gregorian modes with some schemes that appear with Claudius Ptolemy in the 2nd century AD, which is a guide for transposition.

Cristina Serra de Torres (Andújar, 1995) has a degree in Musicology from the University of Granada and a Master’s degree in Music Patrimony from the International University of Andalucia, and is beginning her PhD studies centered around gypsy flamenco genres in Granada. She is a singer and cellist. At age 3, she began her studies in classical, bolero and flamenco dance. While her research is focused on Flamenco and Blues, she has a background on the analysis, harmony, transcription, edition and interpretation of Early Music. Currently, she lives in Granada, where she teaches singing, musical language, music history and appreciation, does research and produces the Spanish language podcast “Música con mucha Historia”.