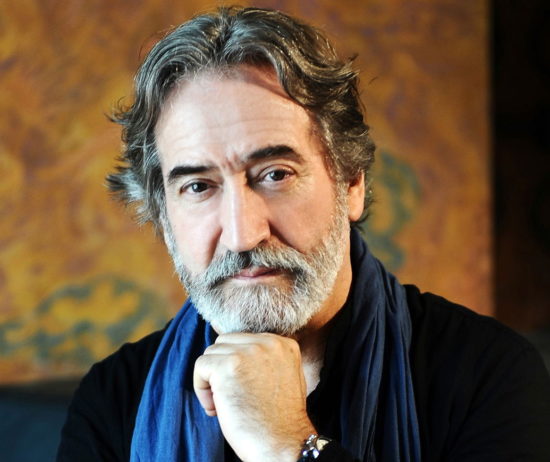 Jordi Savall will return with a baroque ensemble of six to perform music from the score of Tous les Matins du Monde, the 1991 French film starring Gérard Depardieu that introduced the world to the music of the late French Baroque. The concert features music of Monsieur de Sainte Colombe, the grand master of the viola da gamba and the teacher of Marin Marais, a prestigious musician in the court of Louis XIV.

In accordance with CDC recommendations and in keeping with safe practices across the performing arts sector, we will adhere to the following policies for live audiences:

All The Mornings Of The World

Following the huge success of Alain Corneau’s film Touts les matins du monde (1992 César Award for the best Original Music soundtrack and another seven Césars), based on the book of the same name by Pascal Quignard, and the triumph of Marin Marais and François Couperin’s music with the public, Jordi Savall and some of the musicians who took part in that original recording now commemorate its 30th anniversary. In so doing, they pay tribute to Alain Corneau and Pascal Quignard, and to all the musicians of France’s grand siècle whose work the film helped to make more widely known: Lully, the intendant of Louis XIV’s music, who shaped the musical tastes of a whole century, but also
François Couperin, Eustache de Caurroy, and of course the film’s two protagonists, Sainte-Colombe the elder—with his concerts for two viols—and Marin Marais, thanks to the luminous
virtuosity of these wonderful pieces for viol, with their nostalgia and reverie, and which, thanks to Jordi Savall, gave the film its extraordinary depth.

“I remember the first time I met Jordi Savall, in 1990,” writes Pascal Quignard. “He had read the novel: such was his concentration that I imagined it was Sainte-Colombe himself… They recorded at the dead of night. It was cold. And I fell asleep on a bench in the chapel [Saint Lambert des Bois]; I remember very little about the occasion. There was an old 17th century score on which Jordi copied out by hand Sainte-Colombe’s piece entitled ‘Les Pleurs’, and underneath it he wrote, ‘For Pascal, a memento of a dream’… Sometimes dreams have a life far beyond the night on which they are dreamed.

Jordi Savall is an exceptional figure in today’s music world. His career as a concert performer, teacher, researcher and creator of new musical and cultural projects, makes him one of the principal architects of the current revaluation of historical music. His task, which has earned him world renown and which is always brimming with live emotion and spectacular creative vitality, is one in which he has always sought to be faithful to historical music, which is to say the reappraisal of the value of repertoires as specific and as universal as the music of Europe, the Mediterranean and of the whole world.

Jordi Savall began his musical studies when he was six years old as a singer in the Children’s Choir in Igualada (Catalonia), his hometown, and then he went on to learn the cello, completing his studies in the Barcelona Conservatory (1964). In 1965 he started, as an autodicact, to study the viola da gamba and early music (Ars Musicae) in 1965, so he moved on to start advanced studies in 1968 at the Schola Cantorum Basiliensis (Switzerland). There he succeeded his teacher August Wenzinger in 1973, and was teaching for some time many courses and master classes. With his three ensembles Hespèrion XXI (1974), La Capella Reial de Catalunya (1987) and Le Concert des Nations (1989), all founded together with Montserrat Figueras. Jordi Savall has explored and fashioned a universe full of emotions and beauty, and has projected it to the world and to millions of music lovers, to introduce the viola da gamba and the music which had fallen into oblivion, becoming one of the most important protectors of the early music.

With his key contribution to Alain Corneau’s film Tous les Matins du Monde (winner of a César best-soundtrack award), his busy concert life (over 140 concerts a year) and recording schedule (6 recordings a year), and with the creation of his own record label Alia Vox (1998), he demonstrates that the early music does not have to be necessary elitist, so it can be very interesting for a public each time younger and more numerous.

Notable in his operatic repertoire are his participation in the rediscovery of Una cosa rara (performed in 1991) and Il burbero di buon cuore (performed in 1995 and 2012) by Vicent Martín i Soler. In 1993 he presented Claudio Monteverdi’s L’Orfeo for the first time at the Gran Teatre del Liceu, Barcelona, (in 2002 it was recorded by the BBC-Opus Arte and published on DVD). He has also conducted Farnace by Vivaldi at the Teatro de la Zarzuela in Madrid (2001), Bordeaux (2003), Vienna (2005), Paris (2007) and published on CD by Alia Vox. He has also conducted J. J. Fux’s Orfeo ed Euridice, performed at the Styriarte Festival in Graz in 2010, and Vivaldi’s Il Teuzzone performed in 2011 in a semi-concert version at the Opéra Royal de Versailles.

Manfredo Kraemer (violin) studied the violin at the music conservatory in Cologne and was one of the founders of Concerto Köln. From 1986 to 1991 he was a member of the famous chamber ensemble Musica Antiqua Köln. Since then Manfredo Kraemer has performed on a freelance basis with various ensembles, including engagements as principal violinist in productions led by René Jacobs, Jordi Savall, and others. He has taught in Caen, France, and Hilversum, Holland, as well as at summer institute in the United States, France, and Spain. A Biber recording with his ensemble The Rare Fruits Council received the French Diapason d'Or prize and has been greeted with superlatives by the international music press.

Charles Zebley, was born in 1955 and started playing the flute in the Metz conservatory with Pierre Danino, studying later with Bonnie Lake in Baltimore (USA), with Pierre Sechet (Paris), Barthol Kuijken (The Hague) and specilaising in Renaissance Polyphony with Rebeca Stewart. Since 1987 he shares his residence between Paris and Palma, frequently collaborating with the formations of Philippe Herreweghe, Marc Minkowski, Jordi Savall... As a chamber musician he is most interested in the
inedited repertory of 1770 to 1830.

Philippe Pierlot directs the Ricercar Consort ensemble with whom he interprets mostly works of the 17th century, revealing unknown compositions to the public. Several contemporary pieces were written for him, and he is also one of the rare «baryton» players, very peculiar instrument for which Haydn wrote more than 150 trios and other pieces.

Among his recordings specially should be mentioned Heinrich Schütz’ oratorios Auferstehung and Sieben Worte , German 17th Century Works for Viols, Défense de la Basse de Viole,... In 1995 he started the recording of the complete works of Marin Marais, and in 1998, he realized an adaptation for viols and plucked instruments of the opera Ritorno d’Ulisse, given in important European festivals with great success (Berlin, Vienna...)

Philippe Pierlot is frequently invited to take the direction of important works which he restores or adapts. For example, in 1999, Marais’ Sémélé, which had not been performed for 300 years, and for which he recomposed the missing instrumental parts.

Philippe Pierlot taught at the Hochscule fûr Musik, Trossingen, Germany. He now teaches at the Brussels and The Hague Conservatories. He lives in the belgian Ardennes where he gardens, raises geese and his three children.

Lucas Harris began his musical life playing equal amounts of jazz and classical guitar as a teen in his hometown of Phoenix, Arizona. He discovered the lute during his undergraduate studies at Pomona College, where he graduated summa cum laude. He then studied early music in Italy at the Civica scuola di musica di Milano (as a scholar of the Marco Fodella Foundation), then in Germany at the Hochschule für Künste Bremen. After several years in New York City, Lucas moved to Toronto in 2004, becoming a Canadian citizen in 2017. In Toronto he has been the regular lutenist for the Tafelmusik Baroque Orchestra for more than two decades, and performs with many other ensembles in the USA and Canada including the Smithsonian Chamber Players and the Helicon Foundation (see the “Playing” page for more details). He is also a founding member of the Toronto Continuo Collective, the Vesuvius Ensemble. and the Lute Legends Ensemble.

In 2014 Lucas completed graduate studies in choral conducting at the University of Toronto, the degree having been largely funded by a prestigious Social Sciences and Humanities Research Council grant not often awarded to performers. Upon graduating, Lucas was chosen as the Artistic Director of the Toronto Chamber Choir (which celebrated its 50th anniversary season in 2018-2019), for which he has developed and conducted over twenty themed concert programs (see this site’s “Conducting” page for a list). He has also directed projects for the Pacific Baroque Orchestra, the Ohio State University Opera Program, Les voix baroques, and the Toronto Consort.

Lucas lives in Toronto with his wife, Baroque violinist Geneviève Gilardeau, and their daughter Daphnée (age 9).

From 2008-2011 Marco Vitale worked at the Higher Institute of Music in Damascus, Syria, where he taught early music performance practice and performed concerts together with Syrian musicians.

He is the co-founder and musical director of ​Contrasto Armonico​, an ensemble specializing in Baroque operas and the performance of music in the Italian style, using period instruments and historically informed performance practices. In 2012 he founded his own record label ​ayros​, which features recordings by ​Contrasto Armonico​ and other artists. In a collaboration with ​ayros,​ Marco is currently involved in recording the Complete Italian Cantatas by Handel, a thrilling project that will bring to light many undiscovered jewels of Handel’s which have yet to be either edited or recorded. Marco has appeared on several radio and TV broadcasts, including the specialized music channel Mezzo.tv. In addition to ​ayros​, he has recorded for ​Alia Vox,​ ​Naïve​, and ​Brilliant Classics.​

Mr. Vitale appeared as a guest conductor of the Warsaw Chamber Opera between 2015 and 2017, performing a variety of repertoire from Monteverdi madrigals to Mozart symphonies. In 2016-2017 he revived the opera ​Semiramide riconosciuta ​by Leonardo Vinci, conducting from the harpsichord at the Baroque Opera festival in Warsaw. This was the first time in three centuries that this opera had been performed.

In 2018 he composed ​Il ratto di Helena,​ an opera in 17th century style based on a libretto written by Virgilio Puccitelli (1636). The opera was commissioned by The Palace of the Grand Dukes of Lithuania, and performed in Vilnius in celebration of 100 years of Lithuanian independence.

Marco gives masterclasses in harpsichord and Early Music performance practice. He is the artistic director of the ​Arcadia Early Music Academy​ workshop in Poland and teaches at ​La Pellegrina s​ ummer school in the Czech Republic. He gives masterclasses, lectures and workshops at the Fryderyk Chopin University of Music in Warsaw, Fondazione Paolo Grassi in Martina Franca (Italy), ESMUC in Barcelona, the Higher Institute of Music in Damascus, and the University of Southern California in Los Angeles. Since 2017 Marco has been the music director of the ​Denman Baroque Workshop & Festival organized by Andrew Fyson and Robert Newton, which takes place every spring on Denman Island, British Columbia.