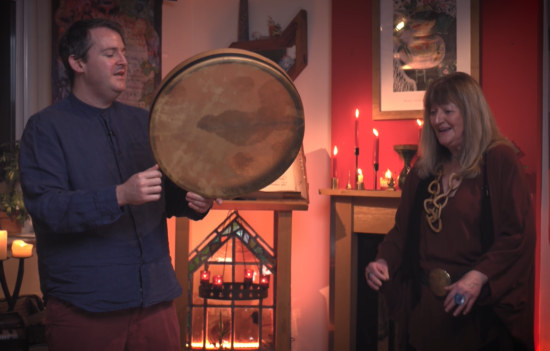 Mother and Son: Lamentation and Joy in Irish traditional Song and Poetry.

This is a unique presentation of Irish traditional song, Gregorian chant and poetry by a mother and son. This performance features one of Irelands most famous Irish singers Mícheál Moley Ó Súilleabháin and his mother, the renowned singer, theologian and musicologist, Rev. Nóirín Ní Riain PhD.

Mícheál has inherited a store of repertoire from his mother, Nóirín, that spans many cultures of sacred and secular song. Much of the Irish language sean nós repertoire that he inherited are ancient lamentations and sacred songs that were passed from mother to daughter. Often called the ‘keening tradition (from the Irish word caoineadh) many of these melodies pre date Christianity. They will perform together as a duo as well as perform solo and speak on musical and poetic significance of St. Patrick.

Rev. Nóirín is famous for her virtuosic voice and accompanying her ancient Irish song on a number of world instruments. Mícheál will sing, recite and play the Irish bodhrán (frame drum) to accompany some traditional song also This mother and son a capella duo are world class and have performed extensively all over Europe and America. . Mícheál has just published his first book of poetry from David Whyte’s Many Rivers Press, fittingly entitled EARLY MUSIC, that features many Irish themes and figures. He will recite from that collection during this performance.

Mother and Son: Lamentation and Joy in Irish traditional Song and Poetry

I learned to love my own voice,
making a friend of it, fashioning
a fountain pen to master
the phantom language
– excerpt from 'Early Music' by Mícheál Ó Súilleabháin

Mícheál ‘Moley’ Ó Súilleabháin is a renowned singer, poet, and speaker from Limerick, Ireland. His artistic identity lives on the threshold between things. He is a master of several worlds of music and poetic performance and composition. His way in the world exists between laughter and poignancy.

From a family steeped in Irish traditional music and academia, he gravitated to performance early, beginning as a drummer, he studied music at Univeristy College Cork. He graduated to an MA in Ethnomusicology at Irish World Academy of Music and Dance before teaching as a freelance music educator with a specialization in rap and human beatboxing (vocal percussion).
In his 20’s he and his brother performed widely under their original acoustic pop song writing duo ‘Size2shoes’. This quirky virtuosic musical relationship brought them all over the world recording and performing. Though mainstream opportunity beckoned, there surfaced a deeper stream of inherited musical and poetic traditions that had been passed down. It was inherited from his parents, the late composer, pianist and ethnomusicologist Prof. Mícheál Ó Súilleabháin and his mother Rev. Nóirín Ní Riain. Both are icons of Irish traditional culture.

Beginning in his early 20’s Mícheál apprenticed himself to the repertoire of his mother, Rev. Nóirín. He collected a store of Irish traditional and interfaith religious song. They created an a capella trio, with his brother Owen, performing across Europe and America. They have a series of albums together of sacred song.
Around this time he and his brother met the poet David Whyte. So began a mentorship in the art of poetry and public speaking that has influenced him deeply to this day. Mícheál and his brother have worked closely with David Whyte for over a decade singing and speaking with him all over the world. Mícheál published his first book of poetry, EARLY MUSIC, on David Whyte’s Many Rivers Press (Seattle) in late 2020. Also in 2020 he founded the Dámh Imeall - (H)Edge School with his brother and mother. (h)Edge School is an online community of enquiry and ritual with online workshops and events on a range of interfaith and multi-disciplinary topics.

Mícheál provides coaching and conversation in a range of fields. He deepens the narrative around creativity and the artists sense of belonging. Permission and virtuosity are deep themes in his poetry, music, and his conversational interest. Music and poetry are both areas where he is brave enough to inspire others.
Poet, Musician, Creativity consultant, Positive provocateur
Master of Arts in Ethnomusicology
Bachelor of Music