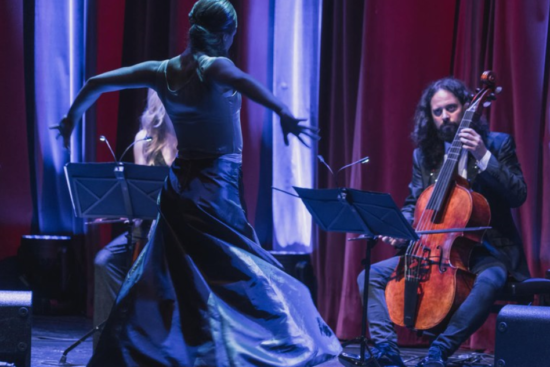 The Spanish ensemble Academia del Piacere has created a beautiful video program that sets the context for the musical contributions of Spain in the 17th century. Polyphonic music of the European Renaissance combines with Moorish influenced xacaras, and folias completing the stylistic evolution that would influence the traditional music of Latin America. The concert features music by Antonio de Cabazón Heinrich Isaac, Jacobus Arcadelt, Santiago de Murcia, Gaspar Sanz, and others. 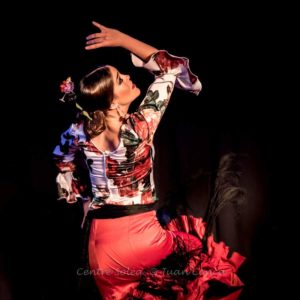 I don’t have to pin myself down in history; I am a contemporary dancer, I do flamenco of today.

“Flamenco is a language that feels like my own mother tongue. I want to live dance with all my inner freedom. I just want to keep being me, and never betray who I am.”

Patricia Guerrero was born in Granada, in the Albaycín neighbourhood, in 1990. This dancer has deep flamenco roots, yet she has always loved exploring other styles of music and dance. Nonetheless, flamenco is her language, a language that she adapts to her own vision, a language that is always evolving with her. 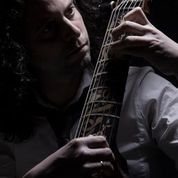 Fahmi Alqhai is considered one of the most brilliant and prestigious players of the Viola da Gamba in the world today, as well as one of the most recognised interpreters of early music, for his personal and communicative approach to historical repertories.

“The viola da gamba is the perfect vehicle for the musical tapestry of Fahmi Alqhai’s extraordinary disc. He brings the instrument into a new realm of joyful potential”

Accademia del Piacere is supported by:

Patricia Guerrero (Albayzín, Granada, 1990) got her first taste of flamenco dancing at home: at the age of three, she started classes at her mother’s academy and since then, her learning has been enriched by influences from a whole range of maestros, assimilating classical dance and classical Spanish dance as well as flamenco itself. Her precociousness was there for all to see from an early age. Her first public performance was at the Peña La Platería, when she was just 8 years old, and shortly afterwards, she performed alongside Juana Amaya at the Albayzín Flamenco Festival. At 15 she joined the Centre for Flamenco Studies directed by Mario Maya, whose company she was touring with as a cast member for Diálogo del Amargo (Dialogue of the Bitter).

Soon, Patricia Guerrero was starting to make a name for herself among fans and flamenco critics. In 2005 she won the Flamenco Art Contest of the City of Ubrique and in 2007, at just 17, she won the prestigious Desplante award at the International Festival of Cante de las Minas (La Unión). This award was a springboard to international success, paving the way for her to perform at some of the world’s most important dance events, such as the Festival de Jerez, the Düsseldorf Festival, the Festival of Music and Dance of Granada, the Youth Biennial of Seville, etc. In 2009, she was invited to join the Mario Maya tribute tour, travelling round the most important theatres and festivals in Spain.

A year later she presented her first solo show, Desde el Albayzín (From the Albayzín), which toured round Europe. At that time, Patricia Guerrero was also asked by Carlos Saura to perform as a soloist in the show Flamenco Today, with which she toured the world and performed on stages as famous as New York’s City Center Theater. This legendary filmmaker used Patricia again for the shooting of his film Flamenco, Flamenco, where she appears dancing Cuban guajira music, together with Arcángel and the choreographers and dancers Rafael Estévez and Valeriano Paños. That same year, she joined Rubén Olmo’s company for Tranquilo alboroto (Quiet Racket).

In 2011 Patricia Guerrero was named prima ballerina of the Andalusian Flamenco Ballet, directed by Rubén Olmo. From the many great performances during this period, critics have highlighted her memorable paso a dos alongside the maestro Antonio Canales in Llanto por Ignacio Sánchez Mejías (Lament for Ignacio Sánchez Mejías), and alongside Eduardo Leal in Metáfora (Metaphor). At the same time, Patricia Guerrero was moonlighting as a guest artist by Arcángel for his shows Olor a tierra (Smell of Earth) with the Academy of Piaccere, and Las idas y las vueltas (Comings and Goings), a fusion of flamenco and Baroque music which landed her the Best New Artist Award at the Bienal de Sevilla 2012. The special collaboration with Arcángel continues to this day, with the show Tablao, which premiered at the Teatro Real in Madrid in 2016.

In 2014 Belén Maya invited Patricia Guerrero perform in her show Los Invitados (The Guests). Other leading figures in flamenco, such as Dani de Morón and Antonio Rey, also cast her in their shows as a guest artist. In 2015 she presented Doce Tiempos (Twelve Tempos) at the Festival of Italica, during which she shared the stage with contemporary dancer Raúl Heras. That same year she gave a solo performance in the Chaillot National Theatre in Paris in the show Cuando sueñan los ríos (When Rivers Dream).

In February 2016, for the twentieth anniversary of the Festival de Jerez, she presented Pórtico, a piece that gave a glimpse of what was to become Catedral, and later premiered at the 19th Bienal de Sevilla at the Lope de Vega Theatre. In this new piece of work, she put herself in the hands of a great stage director, Juan Dolores Caballero. In this exploration of the interior, the physical and the aesthetic aspects of her art, Patricia Guerrero is immersed in codes and languages of the theatre, and aims to construct characters through dance.

Catedral was named Best Show at the Bienal de Sevilla 2016 and received two nominations for the Max Awards 2017, including for Best Female Dancer.

In November 2017 she performed Don Quixote in the Chillot National Theatre (Paris), alongside Andrés Marín’s company.

Fahmi Alqhai is considered one of the most brilliant and prestigious players of the Viola da Gamba in the world today, as well as one of the most recognized interpreters of early music, for his personal and communicative approach to historical repertories.

Born in Seville, Spain, in 1976 to a Syrian father and Palestinian mother, he spends the first eleven years of his life in Syria, where he starts to study music at a very young age. Later he studies—self-taught—in Spain until he enters the Manuel Castillo Conservatoire in Seville in 1994 to study the Viola da Gamba with Ventura Rico. He furthers his studies in the prestigious Schola Cantorum Basiliensis (Basel, Switzerland) with Paolo Pandolfo and in the Conservatorio della Svizzera Italiana (Lugano, Switzerland) with Vittorio Ghielmi. Over the course of his musical studies, Fahmi Alqhai also obtains his degree in Dentistry from the University of Seville.

He is founder of Accademia del Piacere, with which he has conducted many awarded CDs for Glossa, Deutsche Harmonia Mundi and his own label (Alqhai & Alqhai), such as: Muera Cupido, winner of the Opus Klassik Award 2020 to the Best Solo Vocal Recital (Opera), Les Violes du Ciel et de l’Enfer (nominated for the International Classical Music Awards 2011), and Le Lacrime di Eros (2009 Prelude Classical Music Award). In 2012 Alqhai wins the Giraldillo prize awarded to Best Music at the 2012 Sevilla Flamenco Biennal, for the music of his fourth CD Las idas y las vueltas, together with flamenco vocalist Arcángel. In 2016 he wins also the Giraldillo to the Innovation for Diálogos, with Rocío Márquez.

In 2014 he records for Glossa his first CD for solo viol, A piacere, whose innovative conception of the instrument is warmly welcome in Spain, Germany and throughout Europe. In 2016 he launches its most personal work as a soloist, The Bach Album, for the label Glossa (award-wining for GEMA, Scherzo and Melomano). In 2018 he received the Medal of the City of Seville.

From a young age he is invited to work with the most internationally-renowned early music ensembles. He is a regular member of numerous recognised groups such as Hesperion XXI (Jordi Savall) and Il Suonar Parlante (Vittorio Ghielmi). He is also a founding member of More Hispano (dir. Vicente Parilla). With these ensembles, as well as with Accademia del Piacere and as a soloist, Fahmi Alqhai regularly offers concerts in Europe, Japan, the United States and South America’s best concert halls.

As a soloist, Fahmi Alqhai has performed with important orchestras such as the National Orchestra of Spain, the Philharmonic Orchestra of Galicia, Ensemble Vocal de Lausanne (Michael Corboz), Orquesta Barroca de Sevilla, and Al Ayre Español, among others. He has also made his entrance in the fields of contemporary music, as well as jazz, with artists such as Uri Caine. Fahmi Alqhai has also made numerous recordings for record labels such as Alia Vox, Glossa, Winter&Winter, Tactus, Arsis and Enchiriadis, as well as for television and radio in Europe, Asia and America.

Since 2009, he is artistic director of the Early Music Festival of Seville (FeMAS), Spain’s oldest and most important early music festival. In 2020, he receives a Leonardo Grant (BBVA Foundation) for the Colombina Project, about the 15th century manuscript.

The uniqueness of its innovative projects, the technical ability of its musicians and the strong personality of its artistic director have made of Accademia del Piacere a vanguard group in Spanish early music and one of the leading ensembles of this kind in Europe. Accademia is especially appreciated for the group’s fascinating and direct communication to its audience, and its conception of historical music as being alive and full of emotions, an idea conveyed by the group’s musicians to their spectator from the heart.

Accademia del Piacere has revealed new facets in fundamental repertoires of historical music such as the Italian Seicento (Le Lacrime di Eros, Amorti di Marte), the Spanish music of the Renaissance (Rediscovering Spain) or the theatrical music of the Spanish Baroque (Muera Cupido, with Nuria Rial). This has led them to receive prizes such as Choc de Classica (France), Prelude Award (Netherlands), Opus Klassik Award 2020 to the Best Solo Vocal Recital–Opera (Muera Cupido, for Rial) and GEMA Award to the Best Spanish Baroque ensemble (2016 and 2017), among many others. Furthermore Accademia del Piacere visits areas apart of early music: both Las Idas y las Vueltas and Diálogos (respectively with flamenco singers Arcángel and Rocío Márquez) were rewarded with Giraldillo Award in the Bienal de Flamenco de Sevilla (2012 and 2016).