Encountering Love (and Music) in Hell with Dante

On Saturday, March 13, we present “A Night In Hell: Ballo delle Ingrate” — an early Baroque dramatic work whose theme is women banished to hell for the sin of being less than amorous to their suitors. This led me to take a deep dive into the topic of Hell; guided by Dante, I encountered Francesca and Paolo, whose love story has been depicted in many works of art and been represented in several operas. Before sharing their story, I will provide some background on Dante’s Divine Comedy.

Dante and The Divine Comedy

Dante Alighieri (1265-1321) lived in Florence, a city which banished him in 1302. His 700th death anniversary is being widely celebrated this year. The Italian government declared that from now on, each 25th of March is the Day of Dante (dantedì). This year, Florence is displaying a famous portrait of him by Bronzino at the Palazzo Vecchio, its city hall, as a way of welcoming the poet back to the city while expiating for its mistake. 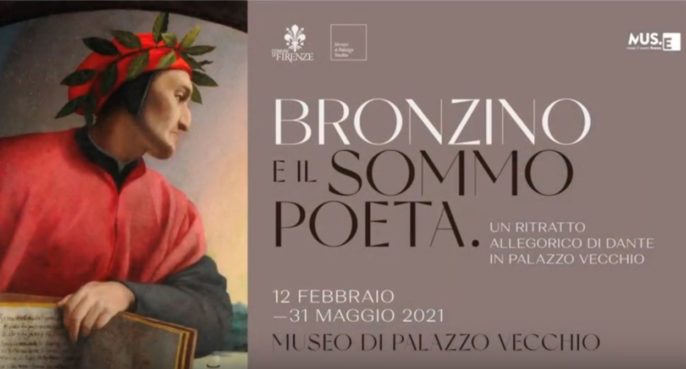 During his exile, Dante wrote the Divine Comedy. Its original title, as explained by the poet in a letter to his benefactor in Verona, Can Grande della Scala, was “The Comedy”. By definition, a comedy can have a happy ending — in this case, contingent on the wise use of human freedom. This is never the case with a tragedy.

At the beginning of the poem, Dante awakens, having lost his way, in a gloomy spot at the foot of a mountain; seeing light at the top, he tries to climb along a path, but is blocked by three beasts. Forced to take a different route, he is encouraged by Beatrice, the love of his life, and is accompanied by the classic poet Virgil through Hell and Purgatory, before reaching Heaven. Each of these stages consists of 33 “canti”; including the introduction, the poem has one hundred of them.

In the fifth Canto, both poets descend into Hell, which consists of multiple rings, each one representing a type of sin, as shown by Botticelli’s illustration of Hell shaped as a funnel. 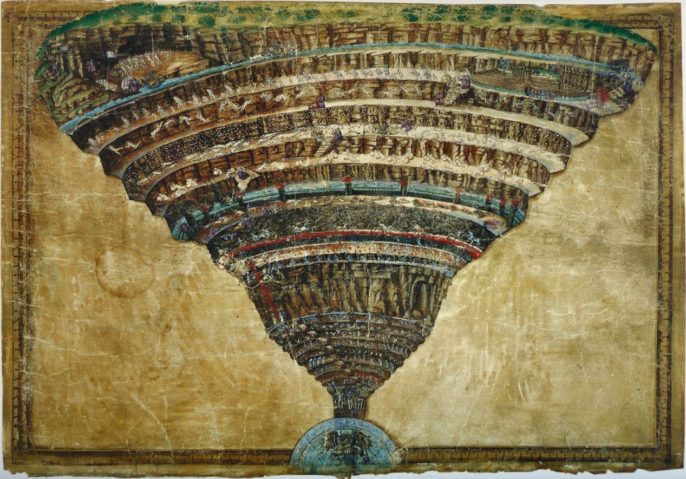 The Divine Comedy was first printed in 1472 — prior to that time, it circulated in manuscript form. The text in those first editions was hard to read as the page was mostly filled with commentary, as we can see below. The first printed books indeed looked like medieval manuscripts. 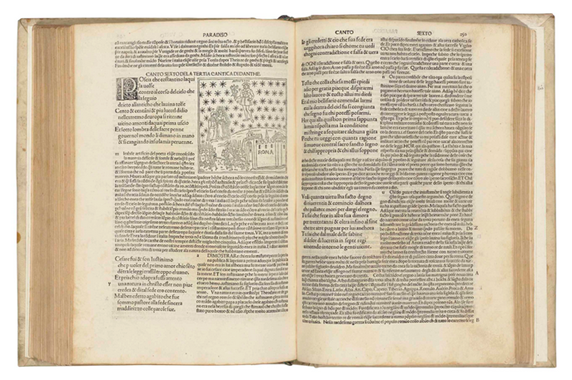 In 1502, humanist Pietro Bembo edited a new version of The Comedy. With clean text and additional punctuation, it was easy to read and became the standard edition well into the 19th century. We can easily read below the famous introduction to the poem: “Nel mezzo del camin di noſtra ita, mi ritrovai per una ſelva oſcura; che la diritta via era ſmarrita” (Midway upon the journey of our life, I found myself within a forest dark, for the straightforward pathway had been lost). 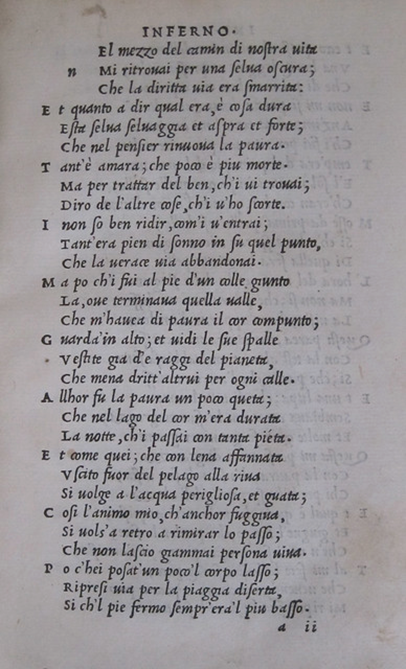 To facilitate comprehension, Pietro Bembo added graphics, including a cross-section of Hell similar to Botticcelli’s painting. In the same spirit, we show a modern diagram of Hell below. We note that the innermost circles are reserved for fraud, falsification and treason, whereas the uppermost ones relate to lack of temperance. 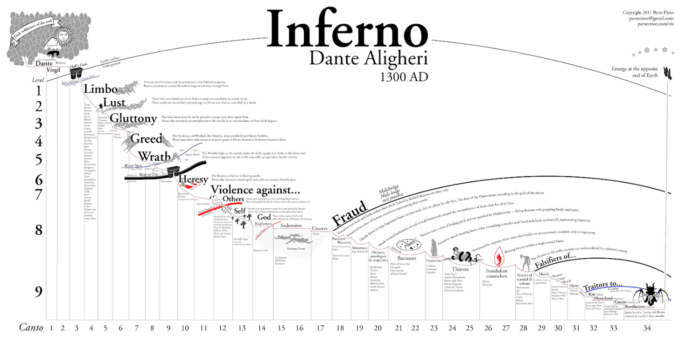 At the Second Circle of Hell, souls must confess all of their sins to Mino. Painted by Michelangelo in The Last Judgement with a huge tail sprouting from behind, he listens — his large ears underscoring this role — and then places the soul for eternity in the proper circle according to the number of times that he wraps its tail around himself. 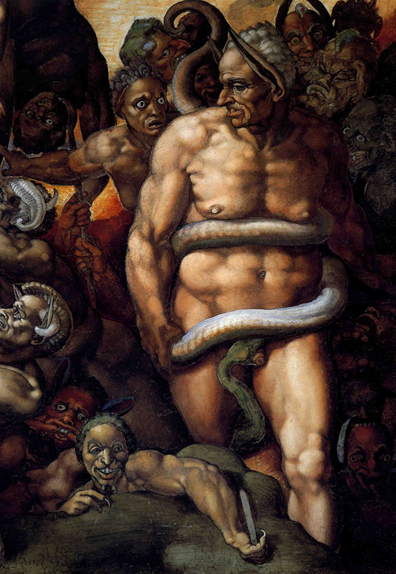 Michelangelo appreciated Dante’s Divine Comedy. After the fall of the Medici in 1494, his new patron Aldovrandi in Bologna often asked him to read Dante outloud to him. Michelangelo had to read from the first printed editions crammed with commentary. Later, he wrote sonnets about Dante in which he indicates his respect for him by stating: “all that should be said of him cannot be said, for too brightly did his splendor burn for our blind eyes” (Sonnet 250).

In his Last Judgment above, we see Mino with its tail wrapped around himself twice — a reference to the Second Circle of Hell. It is there where Dante finds a pair of lovers — Francesca and Paolo.

Francesca da Rimini (1260-1285), a contemporary of Dante, was married, as was the custom at the time, through an arrangement. Unfortunately, the groom was lame. His brother Paolo handled the negotiations, and Francesca was led to believe that Paolo was the groom.

It so happens that Michelangelo also knew of someone who had gone through a “bait-and-switch” experience, as he counsels his nephew Lionardo in 1552 to “take care, since between the two [ladies] you saw together you aren’t sure which is the one they are talking about, that you aren’t given the one in place of the other, as was done to a friend of mine once”.

Paolo becomes Francesca’s lover. When her husband, Giovanni Malatesta, finds out, he kills them both — a tragedy believed to have taken place at the Two Tower Castle in Torriana (near Rimini). 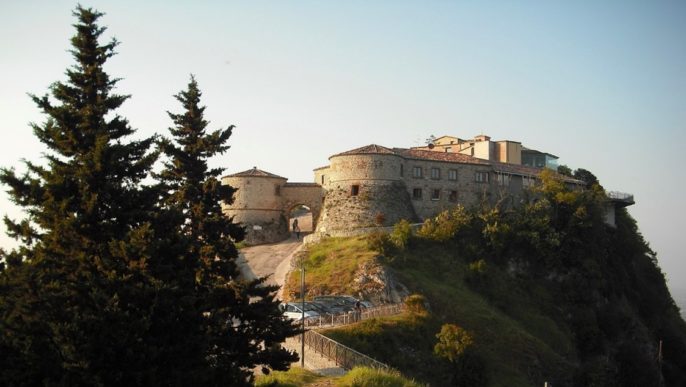 On the Second Circle of Hell, a polite and almost friendly dialogue takes place between Francesca and Dante on the topic of love. Francesca addresses Dante thus:

The kindness shown in this dialogue masks the self-deception of Francesca and her lover with respect to the King of the Universe, shown by Michelangelo at the center of his Last Judgement, who did not condone their adultery and is therefore not their “friend”. They both regard their punishment, rather than their own acts, as “perverse”, and will not pray to Him. 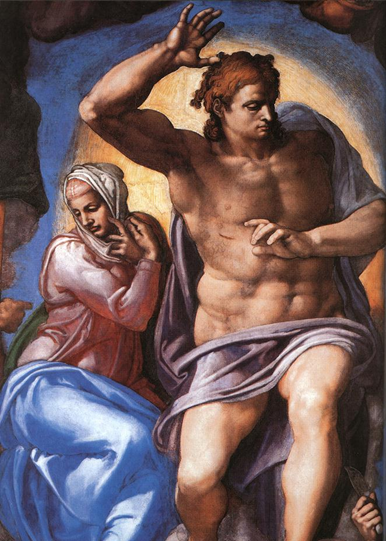 By referring to Love three times, Dante underlines the fact that they have placed their disordered love above divine Love, which is also referred to in triple form. Their attempt at justification begins by arguing that a “gentle” heart is swift to respond to love; that love produces love in return, finally becoming, even in Hell, stronger than death

Francesca is still offended by the way in which they were killed; her solace is that he who did it lies in a deeper ring of Hell, where Caina awaits. Nonetheless, Dante sympathizes with them; using language with religious undertones, he asks Francesca how their love began.

She replies sorrowfully that it first happened when they were together reading a book of stories about illicit loves. Their first kiss has been memorialized in many paintings, and their story has inspired several operas (we recommend one in the “watchlist” below). 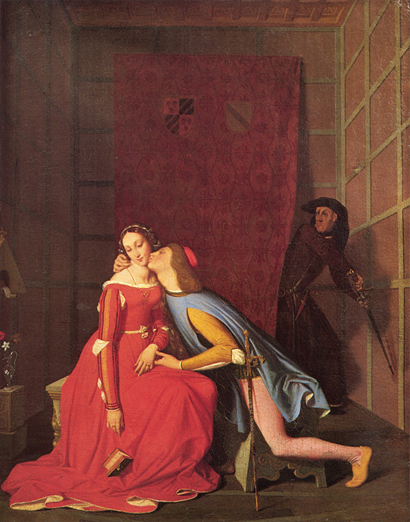 At that moment, Francesca and Paolo were together, reading a book by Galeotto — a panderer in medieval literature. According to Robert Royal, author of “Dante Alighieri: Divine Comedy, Divine Spirituality”, the fact that neither of them had any fear or suspicion while engaged in such reading signals that they both had the same intent.

This leaves us wondering: What book were they reading? Francesca, and Dante, would have been familiar with a French prose version of Lancelot du Lac, which describes how Guinevere kisses Lancelot: “Qant la reine Genieure baisa por la boche Lancelot et Lancelot baisa la reine”. 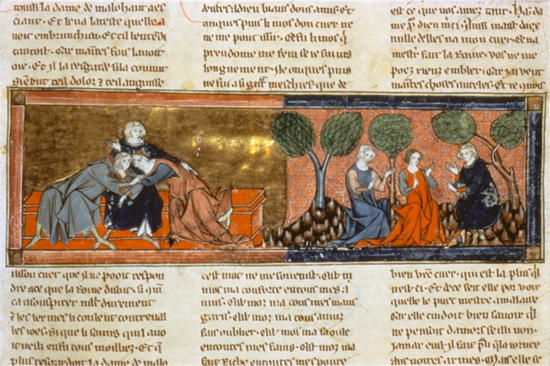 Francesca makes the book and its author be the culprit for their sin. In fact, the expression “Galeotto fu ‘l libro” is now common in Italian to indicate the moment when one made a key life choice. 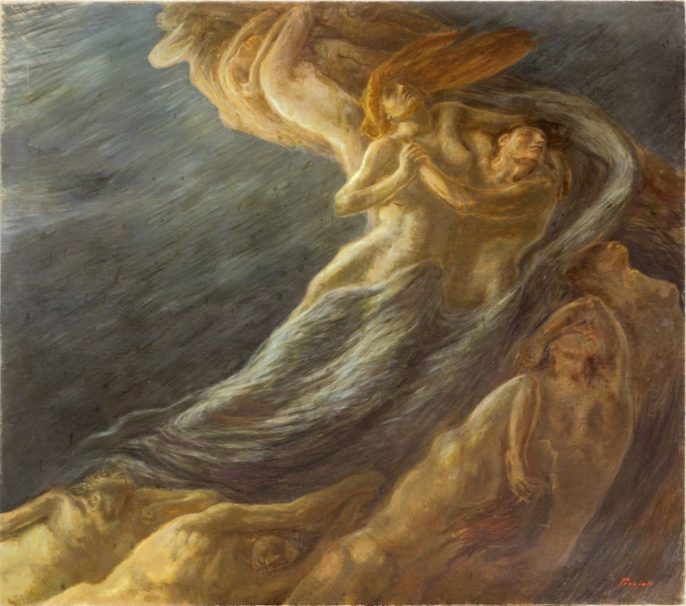 By placing disordered love for another person in the highest ring of Hell, Dante affirms that all forms of love are close to love of God. Yet, “Dante’s conclusion at this point, despite all the sighs, yearnings and delicacy is that a subtle but decisive self-indulgence on these matters is the gateway to perdition” (Royal).

Dante empathizes with their fate and suffering so much that he collapses.

Through his poetry, which goes beyond a mere memento mori, Dante sustains the idea that there is love after death, even in Hell. The sin, however, involves placing disordered love above divine Love.

As a consequence of this disharmony, there is no music in Hell, with one exception: the Vexilla Regis. In the innermost Circle of Hell, the souls of the damned are forced to sing this hymn in honor of Satan as a form of parody.

In imagining the Last Circle of Hell, Dante could have been inspired by the mosaics at the Baptistry of St John in Florence, designed by Coppo di Marcovaldo (1225-1276). The blue demonic figure shown below is blowing a horn; some of the unfortunate souls standing below it appear to be singing in a sorrowful infernal chorus.

Detail of mosaic at the cupola of the Baptistry of St. John in Florence

After suffering through inarticulate and deafening infernal music, Dante finds harmonious music in Purgatory. The role of music in Purgatory and Paradise in Dante, and its relation to sacred music, is a topic of interest for researchers, and a theme for another article.

Listen to the dialogue between Dante and Francesca (starts at 6:17). The entire exchange between Francesca and Dante, in the original Tuscan, is very moving. Read by Roberto Begnini, the actor and director who won an Oscar for “Life is Beautiful” who memorized each canto, reading one a day on Italian television. The actor Vittorio Gassman has also a very expressive reading with explanation. For reading, a great edition with commentary is that by Charles Singleton.

Watch the opera “Francesca da Rimini” here (subtitles in English available). The tragic love story between Francesca and Paolo has been the theme of several operas, the one by italian composer Riccardo Zandonai being the one which is still performed today. It was composed in 1914 based on a play by italian poet Gabriele d’Annunzio (1901). This opera was most recently performed at the Bastille Opera in Paris in 2011, with soprano Svetla Vassilieva as Francesca and tenor Roberto Alagna as Paolo. See more details here.

Listen to the Vexilla Regis — the only music in Hell, according to Dante. The text of the Vexilla Regis is attributed to Venantius Honorius Clementianus Fortunatus, from Treviso, who is one of the latest authors of poetry in the Latin language; biographer of saints and bishop, he is venerated as a Saint of the Catholic Church.

See a 3D Tour of The Last Judgement at the Sistine Chapel, where the music is produced by angels sounding their trumpets at the end of time while Christ sits at the center in a suspended silence. Mino is shown at the entrance to Hell in the bottom right. 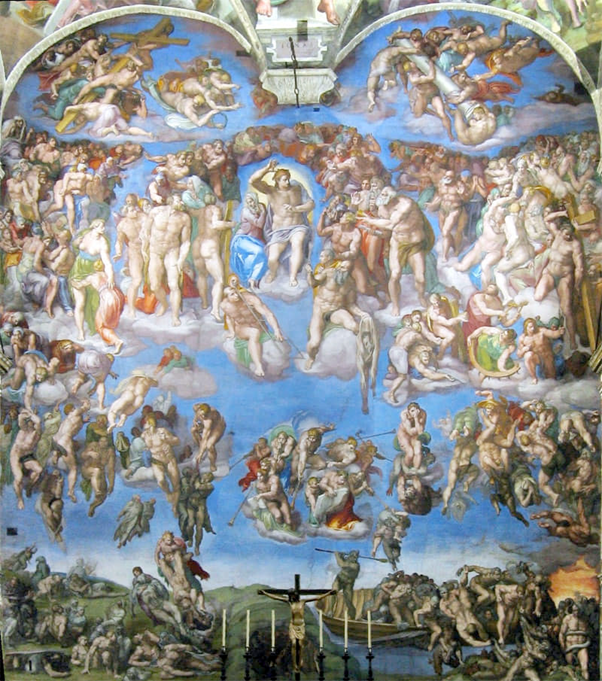