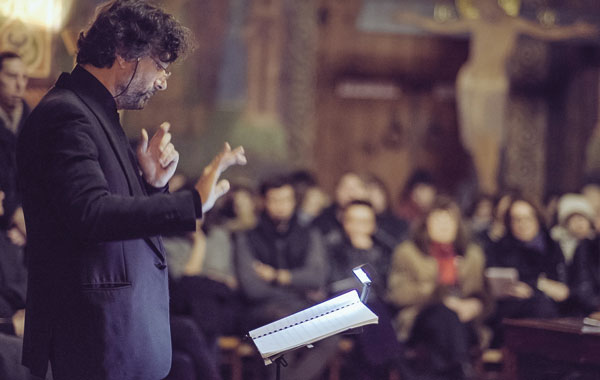 For most people, the name of Florence evokes great painting, sculpture and architecture. Early music enthusiasts also know that the city was also the birthplace of opera. Yet, few people know that it has a popular early music festival, Floremus, which will take place this year from August 27 to the September 12.

We interviewed Fabio Lombardo, organizer of the festival and artistic director of the musical group L’Homme Armé. Founded in 1982 in Florence, L’Homme Armé presents and produces a mostly vocal repertoire from the 1300 to the 1600s, with a focus on works composed in Florence, without excluding great works from that period. Recently, the group has reflected on commonalities between early and contemporary music, seeking analogies in the practical execution of antique and new repertoires.

The name “L’homme armé” (French for “the armed man”) makes reference to a Burgundian school secular song from the Late Middle Ages. It was the most popular tune used for musical settings of the Ordinary of the Mass: over 40 separate compositions entitled Missa L’homme armé survive from this period. “L’homme armé” is especially well remembered today because it was so widely used by Renaissance composers as a cantus firmus for the Latin Mass. Many composers of the Renaissance set at least one mass on this melody; the two settings by Josquin des Prez are among the best known (Wikipedia).

In our conversation, we exchanged perspectives on how they confronted the pandemic — a period during which they were able to organize a series of online conversations, put together a music festival with a live audience, record a short film, produce a CD with an antique repertoire which had never been recorded, and organize this year’s festival.

In the best of Florentine traditions, in which banking families such as the Medici were important patrons of the arts including music, nowadays their largest supporters are also banks.

How did the first year of the pandemic affect you?

When the pandemic began in March 2020, we were finishing the calendar for the Floremus festival which was to start in September. However, in March, everything was closed.  At the end of April, we began programming online conversations around different projects we had done previously.

These conversations took place between the end of April and June 2020.

At the end of June, we were about to cancel the Floremus festival. But we got some signals from our supporters (mostly banks) that we could organize it. We decided to give it a shot and were able to carry out our festival from the 6 to the 13 Sept 2020, with a smaller footprint and reduced programming.

Unfortunately, we had to cancel non-Italian groups.

In addition to the festival, we were able to program concerts from September up until October 2020.

What happened in October 2020?

On the 24th of October, a day I cannot forget, the government decree came out mandating the closing of every cultural activity.

Our last concert was Missa in Illho Tempore by Claudio Monteverdi.

As the prime minister spoke to the nation — we were the first segment to close – I cried. Corona was coming back and we did not know how long this would last.

In Seattle we were closed during that entire time. What did you do after the October closure in Italy?

In December 2020, we decided to produce a small video about this experience, as we realized that the ability to sing and perform in September and October had been a small parenthesis, a cloud, a dream.

In this video, the protagonists of the concerts in these Fall presentations shared their emotions during these moments; they shared their experience of making music again. Called In Quel Tempo (During that time), the video shows interviews with the audience and presenters to elicit their reactions and thoughts.

The video is in our Youtube channel. We prepared a version with English subtitles, available here.

As the closure prolonged, what else did you do?

In Nov-Dec we started to record a work by Francesco Corteccia, the Passion according to St Matthew, which we had planned to present live in March 2021, along with other concerts. This was all cancelled.

We had no reassurance that we would present it, and also had financial uncertainty.

We decided to crowdfund the production of this work, which had never been produced before, and this gave us a positive result, and thus we were able to record in March and finish production by the end of May 2021.

We find the crowdfunding route very interesting. Did you find that you had the same supporters, or new ones?

A group of people supported the ensemble regardless, but crowdfunding allowed us to reach a new group of supporters who were interested in the project itself, since it was the first time that this work was produced.

Do you find that people are getting fatigued about their online experience?

During the pandemic, we have not done any online concerts. We decided not to do them, so I do not know how the audience feels. When we did 12-15 conversations between April-June 2020, the number of participants changed every time — we invited singers, musicians, and musicologists and the audience number changed every time.

In Italy, for example, the first closures took place from Feb to June 2020 yet we observed that different places closed at different times; the audience state of mind may be different in different regions.

As people get vaccinated, and start to go out, the interest in online music decreases, and people crave going to their first concert. How do you respond to that need?

During our last festival in 2020, everyone was thanking us, not just for the quality of the music but also for the emotion of being together in the same space listening to the music together. Online concerts don’t give you this experience. We paid a lot of attention to the spaces in which we organized concerts, and in Florence we have the fortune to have many beautiful places in which to do so. The location conveyed the sacredness of the moment of having the audience together with the musicians, an almost mystical moment that can only happen when the two are together sharing the space.

This year’s festival will be dedicated to Josquin des Prez and will take place in Florence from the August 29 to the September 13. It will encompass sacred and profane music, conversations and a laboratory. All are invited.

What challenges did you face in organizing this year’s concert?

We had two types of uncertainty: regulatory and financial. Up until the last minute, we did not have the full budget. We depend on many public institutions for our budget: local and national government.

Francesco Corteccia is a composer we have written about in the past (see this article). His Passion according to St Matthew has parts read in vulgar Italian, and others in Latin. Was this unusual in the early 16th century in Florence?

We follow the hypothesis that during Holy Week, the Gospel was read twice: in Latin during the Liturgy, and in vulgar Italian outside of the Liturgy. Recall that Florence had many confraternities, where this second reading could take place. Under this hypothesis, Corteccia’s Passion According to St. John was also produced a few years ago.

Under this hypothesis, and given the times when these works were produced (1527-1532), do you think there was any influence from the protestant Reformation in the choice of using the vernacular language?

With respect to the Reformation, the argument is very delicate, because the religiosity of the Florentine people was always very particular. Concretely, let us not forget Girolamo Savonarola.  In fact, the Bible we used was the Marmetine which was put together by a friar who was formed at San Marco, the convent in Florence where Savonarola was prior.

In this hypothesis, in the year 1532, the Passion of Christ was, for the Florentines, an illustrative story, as they could recognize in it many of the events that took place that year. The people of Florence would follow the narration, or racconto, as they searched for how to survive everything that was taking place in Florence.

At that time, the Medici had been thrown out; it was the last Florentine Republic. The troops of the Emperor (Charles V) were surrounding the city, which was almost sacked as Rome had been in 1527. It was a time of pestilence. Then the worst of the Medici, Alessandro il Moro, came to power; he was very violent. There was hunger throughout.

It was then “A Passion for the People”, fittingly read in the vernacular.

Was it by plan or coincidence that you chose to produce Corteccia’s “St. Matthew’s Passion” this year of pandemic?

I have thought about the coincidence that in this strange year, we have also chosen this work. But I cannot claim that this is one of the motives that I chose this program, as the program was chosen beforehand. It was definitely a coincidence, and a good one.

Passion According to St. John by Francesco Corteccia

Passion According to St. Matthew by Francesco Corteccia, produced and recorded by L’Homme Armé