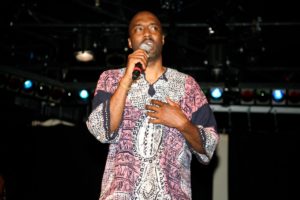 Jabali Stewart
My name is Dr. Ernest Jabali Stewart. My family has always called me Jabali, and it is the name I have always used. My father’s father was named Ernest. I was named after him and wear his name with honor. He was born, raised, and died in the country of Trinidad, where my father too was born. Grandpa Ernest died young, but from all accounts he was an amazing musician, exercising his talent on the violin and the guitar. Music runs deeply on both sides of my heritage tree. My maternal grandmother, Evelyn McDonald, taught music for a living and all of her kids sang or played an instrument. In fact my mother and her siblings had a gospel group called the McDonald Sisters, which can still raise the roof to this day. My earliest music training came from my mother, as she taught me to sing harmony. I took that training and dove headlong into the world of rock through the doorway Jimi Hendrix provided. That ultimately led me to the Bad Brains, and the magical wonderland of punk rock where I became a lead singer and bassist for multiple bands. That path ultimately led me to the saxophone giant, John Tchicai, with whom I studied for three years.

From there the path got more academic. I took my on-the-ground musical learning and entered graduate school, where I received a PhD in Ethnomusicology. Throughout my studies I constantly struggled with the split between musicology and ethnomusicology, feeling as though the music of Europe and the rest of the world were not to be analyzed with the same sense of worth. This is a sentiment and practice by which I cannot abide. My studies on the intersection of music, dance, and ritualized violence only deepened that belief. During the course of my studies I was fortunate enough to begin playing with an Afro-Peruvian ensemble, which would morph into De Cajòn. It became a way for me to connect with more of the African Diaspora, allowing me to see how we used similar roots to magnificently different ends depending on where we landed in the New World. De Inga y Mandinga is a crown jewel of my time with De Cajòn. It has become a way in which my indigeneity from multiple root systems is given voice and honored. I look forward to sharing the space and the magic with you. 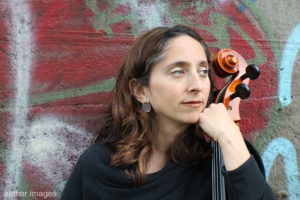 Taryn Webber
Little did I know in 2002 when I walked into my “Introduction to Afro-Peruvian Music” class with Monica Rojas in my first day of grad school at the UW that I would still be making music with her 20 years later!! Raised as a classically trained cellist and pipe organist, I developed a deep fascination with the music of non-western cultures during my undergraduate studies at Syracuse University. My senior year of college, I had the privilege of visiting a friend living in Seattle who was pursuing her a master’s degree in ethnomusicology at the UW, and I was hooked. I picked up everything and moved from my home state of Connecticut, took a job teaching orchestra and choir at a public middle school in Seattle, and began my Pacific Northwest adventure. My original intent was to pursue a master’s degree in Ethnomusicology, but after a few years of teaching realized that I wanted to do it for the rest of my life. Coming from a mostly-white New England town, I have always felt that my perspective in life is very limited. Over the years I have yearned for ways to get out of the security of my life of privilege, and being a part of De Cajon has been a large part of that exploration for me. I have been playing with Monica and Jabali for the better part of the last 20 years, and I am hoping that I will continue to do so for another 20 more years in the future. De Inga Y Mandinga 2022 will be life changing experience for both the performers and the viewers, and I hope to see you all in the audience!