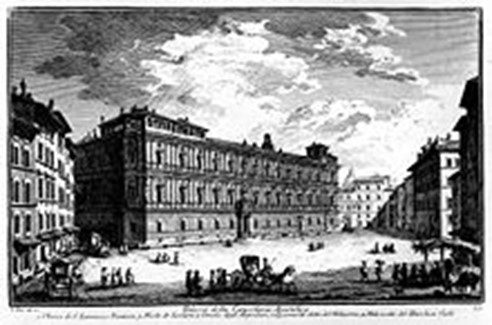 A brief description in John Mainwaring’s Memoirs of the Life of the Late George Frederic Handel (1760) relates how Handel and Scarlatti (born the same year, 1685) entered into a musical contest with each other at the palace of Cardinal Ottoboni in Rome in 1709:

As [Scarlatti] was an exquisite player on the harpsichord, the Cardinal was resolved to bring him and Handel together for a trial of skill. The issue of the trial on the harpsichord hath been differently reported.  It has been said that some gave the preference to Scarlatti.  However, when they came to the Organ there was not the least pretense for doubting to which of them it belonged.  Scarlatti himself declared the superiority of his antagonist, and owned ingenuously, that till he had heard him upon this instrument, he had no conception of its powers. So greatly was he struck with [Handel’s] peculiar method of playing, that he followed him all over Italy, and was never so happy as when he was with him.

Later in life, Scarlatti was known to cross himself in veneration when speaking of Handel’s skill as a keyboardist.

For our video version, from Tony Palmer’s 1985 movie God Rot Tunbridge Wells: The Life of Georg Frederic Handel, the competition is reduced to just one piece, played on two harpsichords, with the competitors alternating phrases, but my goodness what a duel it is!

On Christmas Eve, 1781, Mozart—recently relocated from Salzburg to Vienna as a freelance musician—and Muzio Clementi (1752–1832)—on a European tour from London to promote John Broadwood’s fortepianos—engaged in a musical duel organized by Emperor Joseph II of Austria at the Imperial Court in Vienna.  Neither artist was informed of the contest ahead of time, nor that an audience would be present that included the Grand Duke Paul of Russia and his wife and other aristocrats.  Clementi was asked to play first, and he astonished everyone with his Sonata in B-flat major, Op. 24, No. 2, brimming with parallel octaves and thirds performed with unprecedented force—his specialty—and culminating in an improvised cadenza. Clementi must have delighted in the virtuosity he could display on the lighter-action Viennese fortepiano available to him for this competition.

Mozart showed off by elaborating twelve virtuosic Variations in C major on a simple French children’s song, “Ah! vous dirai-je, maman / ce qui cause mon tourment?” (“Ah! shall I tell you, Mama, / what causes my torment?”, the same melody we use for “Twinkle Twinkle, Little Star”).  Then the Grand Duchess produced some sonatas by Giovanni Paisiello (1740–1816)—who was maestro di cappella in Russia at that time—and Mozart played the opening Allegros while Clementi played the Andantes and Rondos. And finally, the two performers selected a Paisiello theme and developed it on two pianofortes. Joseph II is said to have declared the competition a tie.

After the competition, Mozart roundly denounced Clementi.  To his father, he wrote in January 1782:

[Clementi] is an excellent keyboard player, but that is all.  He has great facility with his right hand.  His star passages are [parallel] thirds.  Apart from this, he has not a kreutzer’s worth of taste or feeling; he is a mere mechanicus.

Mozart added later, “Clementi is a charlatan, like all Italians. He marks a piece presto but plays only allegro.”  Clementi, on the other hand, spoke highly of Mozart: “Until then I had never heard anyone play with such spirit and grace.”  We should note, though, that Mozart was not entirely put off by Clementi’s art, for ten years later he “borrowed” the opening theme of this very Clementi B-flat major Sonata for his own overture to The Magic Flute!  (In subsequent publications Clementi had to note that he had composed his sonata ten years before Mozart’s opera, though he did not hesitate to profit from preparing a solo piano version of The Magic Flute overture.)

If you have time for a full recital (an hour and fourteen minutes), you can enjoy fortepianist Robert Hill’s virtual version of this competition in which he draws freely on solo fortepiano compositions by both composers, beginning with Clementi’s Sonata in B-flat Major.  The playing is exquisite, and in these days when live concerts are verboten, this recital can be a fine substitute.

In February 1786 Emperor Joseph II staged a competition between Antonio Salieri (1750–1825) and Mozart as an entertainment for the benefit of the Governors General of the Austrian Netherlands, the Archduchess Maria Christine and Duke Albert of Saxony-Teschen.  Each composer was asked to write an opera, to be held in the Orangerie at Schönbrunn Palace outside of Vienna. The librettos of both short operatic pieces parodied the day-to-day business and problems of staging operas. Mozart wrote an overture and four songs for a German Singspiel entitled Der Schauspieldirektor (The Theater Director), Salieri composed an entire hour-long miniature opera called Primo la Musica, poi le parole (First the Music, then the Text).  A large party of Vienna’s elite attended the competition, at the conclusion of which the Emperor awarded the composers for their relative achievements. Salieri received 100 ducats, the normal fee for an opera, while Mozart was awarded 50 ducats, for his partial opera. So in monetary terms, it was essentially a draw.

For the popular movie Amadeus, the competition between Salieri and Mozart was moved to the Palace itself and reduced merely to Mozart making a devastating critique of a little keyboard piece Salieri had composed for the Emperor, who obviously has limited keyboard skills.  Did this ever happen?  Well, with Tom Hulce’s “Animal-House” characterization of Mozart (who we know did like practical jokes), it certainly is great fun.

When Steibelt came to Vienna with his great name, some of Beethoven’s friends grew alarmed lest he do injury to the latter’s reputation.  Steibelt did not visit him; they met for the first time one evening at the house of Count Fries … Eight days later there was again a concert at Count Fries’s; Steibelt again played a quintet which had a good deal of success.  He also played an improvisation (which had, obviously, been carefully prepared) … This incensed the admirers of Beethoven and him; he had to go to the pianoforte and improvise.  He went in his usual … manner to the instrument as if half-pushed, picked up the violoncello part of Steibelt’s quintet in passing, placed it (intentionally?) upon the stand upside down and with one finger drummed a theme out of the first few measures.

Beethoven then proceeded to improvise a piece based on just three notes of Steibelt’s music, creating a “storm” of his own, as he embellished and mocked what he felt was Steibelt’s simplistic piece.  Humiliated, Steibelt stormed out of the room while Beethoven was still playing and vowed he would not set foot in Vienna again as long as Beethoven lived there.

In the following BBC biopic about Beethoven, the two pianists show off their abilities at improvisation using a theme from Mozart’s opera The Magic Flute.  The theme may not be historically accurate, but the “storm” rages nonetheless.