Frédéric Chopin (1810–49) had at his disposal in Paris two very different types of grand piano, one by the firm of Ignace Joseph Pleyel (1757–1831) and his son Camille (1788–1855), the other by Pierre Érard (1794–1855).  When visiting London in 1848 Chopin had a large drawing room in which he lived in “piano heaven” — with instruments by both Pleyel and Érard, and one by Broadwood & Sons as well!  He is said to have remarked, “When I am feeling indisposed, I play on an Érard piano and I easily find in it a ready-made sound; but when I feel alive and strong enough to find my own sound, I need a Pleyel piano.” 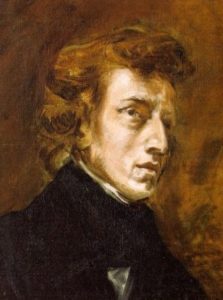 On another occasion, Chopin remarked about Érard pianos: “It makes no difference whether you tap the keys lightly or strike them more forcefully: the sound is always beautiful and the ear asks for nothing more, for it is under the spell of the full, rich sound.”  As a contemporary Latvian pianist who played on Chopin’s Pleyel confided to his diary, “Until now I played more on resistant pianos than on easy pianos: this has greatly strengthened my fingers. However, on the resistant kind of piano, it is impossible to obtain the finer nuances of movement in the wrist and forearm, each finger moving in isolation.  I experienced this nuanced playing at the home of Chopin on his beautiful [Pleyel] piano with a touch so like that of the Viennese instruments. He calls it a ‘perfidious traitor.’ What came out perfectly on my solid and robust Érard became brusque and ugly on Chopin’s piano. He found it dangerous to use for too long an instrument with a beautiful sound, such as the Érard. He said that those instruments destroy the touch.”

Today, we shall explore performances on Pleyel grand pianos, including the one Chopin shipped to and played in England.  Next Sunday we shall experience his music on a piano by Érard.

The Austrian-born French composer/virtuoso pianist Ignace Joseph Pleyel, who in his youth had studied with Joseph Haydn, established his piano-manufacturing firm in Paris in 1807.  His biggest contribution to the development of the piano was the use of metal frames on which to string heavier wires, which led to increased volume in public halls, and at the same time resulted in more reliability in tuning.  In 1815, his son Camille — an outstanding and much respected virtuoso — joined Ignace as a business partner. 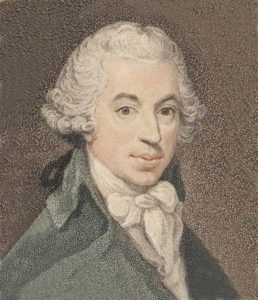 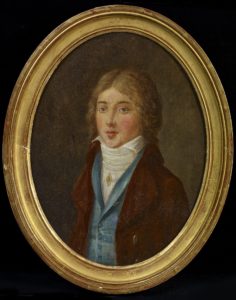 In order to showcase the excellent instruments of Pleyel et Cie, a dedicated performance venue, the first official Salle Pleyel, opened in 1830.  It was merely a living room, a salon, seating 150 guests, but it hosted the greatest pianists of its day, including Frédéric Chopin in 1832 and Franz Liszt in 1833.  As Chopin wrote to his family, “Pleyel’s pianos are non plus ultra. The sound has a special satisfying quality, the upper register bright and silvery, the middle penetrating and intense, the bass clear and vigorous. The striking of the hammers has been designed to give a sound that is pure, clear, even, and intense.”  Camille Pleyel presented Chopin with the newest model of his piano model in 1839 (now in the National Museum of Warsaw), and in 1848 Chopin in return gave his last concert at the larger, 550-seat Salle Pleyel that had been built near the factory in 1839. 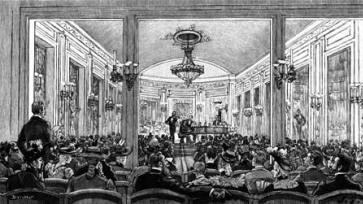 Of the Pleyel piano compared to modern instruments, Marcel Lapointe, who restored an 1848 Pleyel, has written, “The sound is not as loud, the action lighter, and the keys smaller. The octave span is narrower, and the key dip is eight millimetres, compared to ten millimetres on a modern piano.  The biggest difference is the tone color.  On a modern piano the sound tends to be homogeneous, but on a Pleyel you have three distinct sections with distinctive tones, giving the pianist many different colors with which to work.”  The action is a refined version of the “single escapement” action first developed by John Broadwood in Londion. 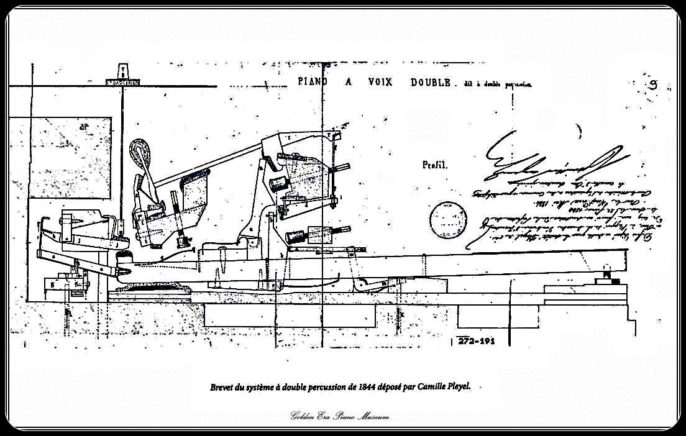 Diagram of the action in an 1844 Pleyel piano

(If you would like to listen to her play all twenty-one Nocturnes on this lovely instrument, see https://www.youtube.com/watch?v=JM2CLm7WkxI)

Now that I’ve whetted your appetite for Chopin on the Pleyel piano, I’d like to turn you over for a while to the capable hands of piano collector extraordinaire Alex Cobb of Hatchland Park, Surrey, and the young Polish pianist Krzysztof Moskalewicz, who will perform for you a full fifty-four minute concert of Chopin’s music on the composer’s own 1848 Pleyel piano that he played on his visit to London that year.  You may listen to the entire concert or sample certain pieces:

Be sure to click on “SHOW MORE” for Alex Cobb’s program notes and a biography of the pianist.

You can see in the camera shots through the piano that in place above the strings is a wooden inner baffle, which is known variously as a Schalldeckel or Klangdeckel or “sound cover,” a “faux table d’harmonie” or “false soundboard,” or even a “dust cover.”  Yes, it does help to keep dust out of the piano, but its purpose was said to “modify the timbre and increase the volume by a small amount” (Claude Montal, L’ art d’accorder soimême son piano, 1836).  On this piano it seems to modify the tone by blending the low and tenor ranges.  (For an engaging twenty-minute discussion and “side-by-side” demonstration of the “false soundboard” on an 1820 Johann August Tischner fortepiano, built in St. Petersburg, see

With the “false soundboard,” the tone is clearly more refined.  An uninterrupted performance of this lovely Beethoven movement is available at

One always wonders in cases like this how close the sound of the piano now is to how it sounded when it was new.  Unless a lot of parts have been replaced (in which case is it the same piano really?), lots of parts will have changed in ways that change the sound.  The wood of the soundboard and bridges will have changed their moisture content and mechanical properties, and this may well result in a less resonant sound than the piano originally had.  The strings will have corroded, also changing the sound. Then there’s the wear of the hammers and action.  To discover we’d have to make a new copy, and we still wouldn’t be sure, as we wouldn’t have exactly the same materials. Still, this was a very nice concert.

An ongoing — and at times heated — debate exists in the field of early music between the advocates of antique original instruments (and “To Restore or Not to Restore, | That is the Question”) vs. those who feel that only fine replicas can approach the sound of the pianos when they were new!  (Our approach with the historical instruments in our collection has been to restore them very carefully and with materials as close to the original ones  as possible.)

And then we have “The Question of Felt Hammers”: Evidence from well-preserved instruments point to Chopin’s Pleyels originally having hammers covered with a very soft grey felt, which, as Massimiliano di Mario observes, creates a tone “more ‘veiled’ in sonority than [Cobb’s Pleyel] piano. . . . The piano’s [felt] hammers only lasted a very few years before they wore through to the leather, so every year or two, everyone [needed to buy] a new piano” or at least have the hammers recovered or new ones installed.

The exquisite performance of the Nocturne in D-flat major, op. 27 no. 2, by Els Biesemans makes a strong case for felt-covered hammers.  The original felts on the hammers on that 1844 Pleyel are made of 90% extra fine wool fiber and 10% beaver. (Beaver-felt hats were the rage in the late 18th and early 19th centuries. In terms of performance practice, note how the pianist expressively plays the bass notes slightly ahead of the melodic notes, as was the style in Chopin’s time, but something modern pianists are taught not to do! 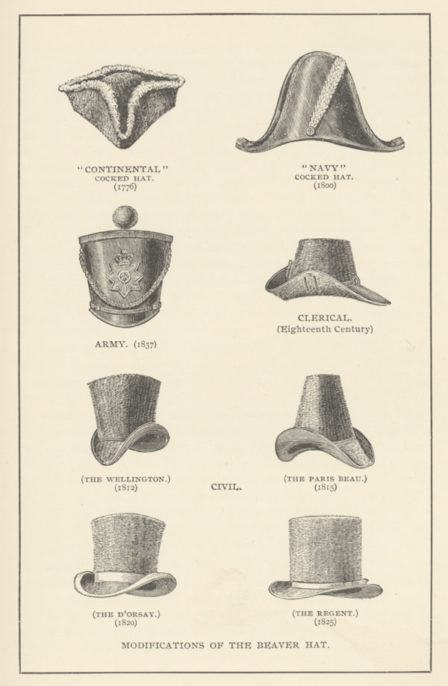 By “subscribing” to di Mario’s YouTube site, one can enter a whole world of “soft grey felt” experiments and performances.

Well, there you see some of the issues “early music” performers face when venturing into the 19th century.