This year’s celebration of Venice’s well-known carnival, which ended this week, was steeped in melancholy feelings in this time of isolation, social distancing, closed shops and cafés, loss of tourism with the economic hardship that this entails, and punctuated by the death of some of its elders. For Venice, this situation coincides with the historically high floods of November 2020 – at 6.1 ft, the highest since 1966  –  and a persistent air pollution which, despite the reduced mobility in Italy, was at an all-time high during 2020. 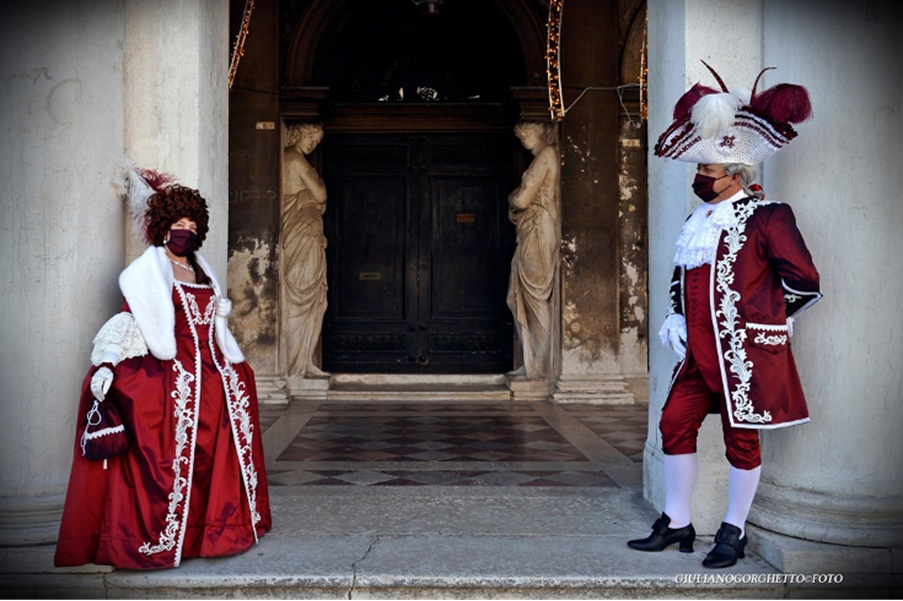 Yet, some venetians and guests found a way to celebrate in style, while meeting the sanitary requirements of our times. To accompany a city which so much has graced the history of music, I would like to invite you to listen to a concert steeped in Venetian art — with music from Alessandro Marcello and Antonio Vivaldi held in a room richly decorated with frescos from Giambattista Tiepolo.

The Tiepolo family settled in Venice in the 9th century, when a Byzantine dignitary by the name “Teopulos” first arrived from Constantipole. Giambattista, who lived from 1696 to 1770, was Europe’s most famous fresco painter in his day. A master of color and form, once he was inspired, he painted very quickly, leaving his patrons in awe.

The last member of this illustrious family to live in Venice — Maria Francesca Tiepolo – died in March, 2020. In her obituary, the Scuola Grande di San Rocco, to which she belonged, stated that she was a “depositary of vast knowledge, always curious about daily facts and clever in conversation, and for a long time an authentic protagonist of the intellectual life of Venice to the point of almost representing a continuity between the glorious Republic of San Marco and the difficult contemporary condition”. As at so many funerals this past year, there were no guests.

Last year, on the 250th commemoration of Giambattista Tiepolo’s death, there were several exhibitions of his work in different countries. In Germany, the first retrospective on Tiepolo was done, at the Staatsgalerie Stuttgart, and was titled “Tiepolo – the best painter of Venice”. Tiepolo’s exhibition at Milan’s Gallerie d’Italia is still ongoing, and its virtual tour is worth visiting.

Tiepolo had nine children, two of whom, Domenico and Lorenzo,  helped him in his craft, closely guarding  the family secrets for color mixtures, and would go on to become painters themselves.

At Milan, Tiepolo painted a magnificent ceiling, known today as the Galleria del Tiepolo, at the Palazzo Clerici. This ceiling was hard to paint, due to its unusual dimensions – 16 ft wide and 70 ft long. Once it was finished, though, it was left intact, rendering it one of the most beautiful and best-preserved examples of the Italian Rococo style.

The vaulted ceiling, which makes for great acoustics, has a painting of Apollo, riding a chariot with four horses, with the four known continents below represented by animals – the elephant, horse, crocodile and camel. The horses resemble the bronze ones at St. Marks which once adorned Constantinople’s circus. 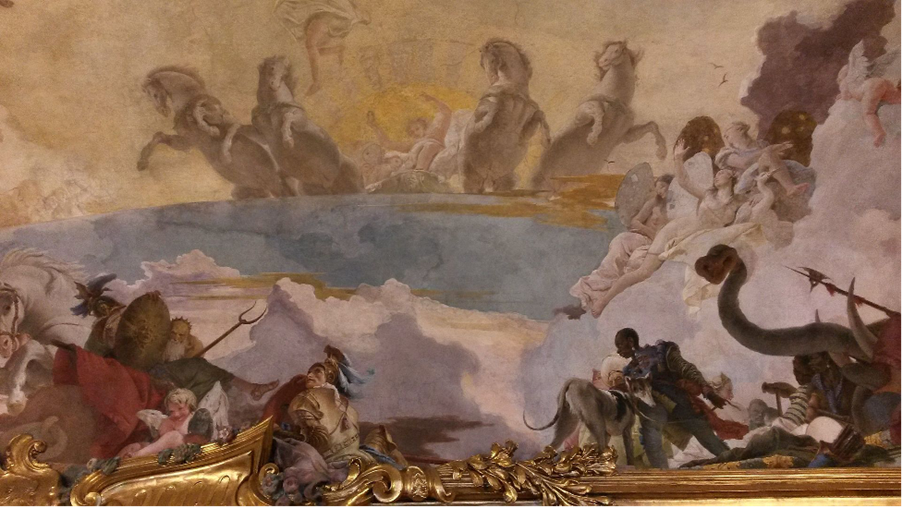 Giambattista Tiepolo – The Chariot of the Sun (detail)

In this elegant and beautiful space, the works of two venetian music masters and contemporaries of Tiepolo, Antonio Vivaldi (1678-1741) and Alessandro Marcello (1673-1747), were exquisitely performed by the chamber orchestra of the La Scala nearly a decade ago. Alessandro had a younger brother, Benedetto (1686-1739), who was also a composer.

Even though Vivaldi was their contemporary, he came from a different background; while the Marcello’s belonged to one of Venice’s leading families and had received a nobleman’s education; Vivaldi was the son of a merchant and was educated at the local seminary. Having moved in different social circles, they now unite us through their music.

Vivaldi’s concerto in G minor for two violins was delicately performed, conveying the subtle elegance of the Venetian red priest. While the orchestra did not use period instruments, I find that this did not take away from the beauty of the performances.

Alessandro Marcello’s concerto in D minor for oboe and orchestra was, for a long time, credited to his brother Benedetto. In three movements, it begins with an andante spiccato that in me evokes a morning walk in Venice as the city wakes up among the morning mist. Its second movement, an adagio, touches the soul with its melancholy tones, which can arise as one contemplates Venice’s past glories and current troubles. The last movement, a presto, is floral and pastoral, expressing the carefree joy of the present moment – for example, during carnival.

Marcello’s concert in D minor for oboe and orchestra