Last weekend I mentioned that, in addition to arranging a four-violin concerto from Antonio Vivaldi’s popular L’estro Armonico, op. 3, for four harpsichords and strings, Bach “reduced” three concertos from this set for unaccompanied harpsichord, and two more for organ. He most likely prepared these “reductions” during the period July 1713–July 1714, while he was serving as organist to the court of the Duke of Weimar and learning the new Italian style stemming from sunny Venice. I’ve placed “reduced” and “reductions” in quotation marks because, while fitting the full tutti onto just a keyboard, Bach went further and added more contrapuntal lines to Vivaldi’s texture. Some of the concertos he transposed into different keys. 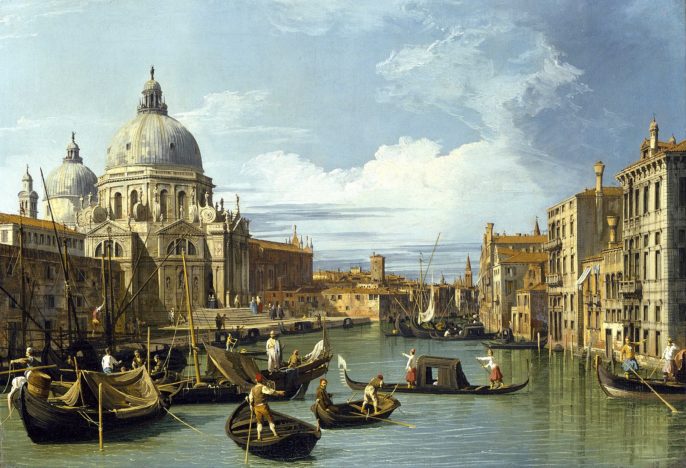 Canaletto – The Entrance to the Grand Canal, Venice 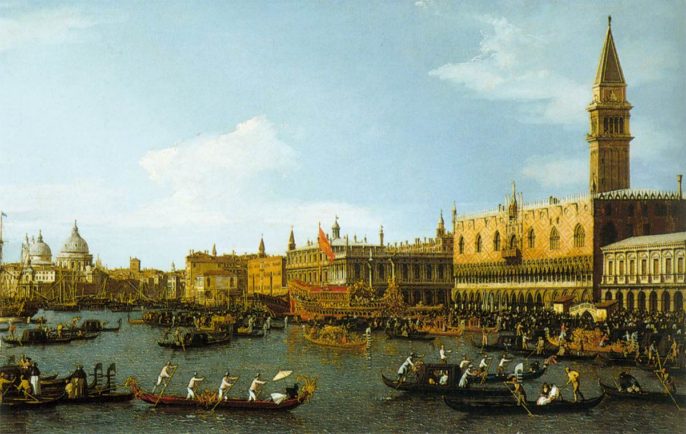 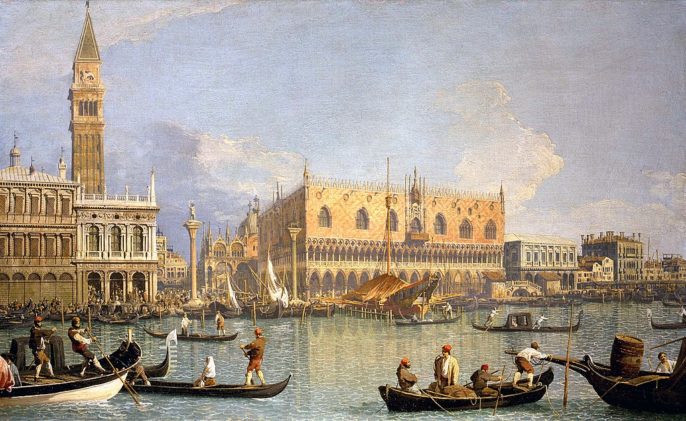 A scalar motive, easy to hear when it returns, opens the ritornello. The solo violin offers up echos and sequences. Standing in stark contrast is the minor-key Largo, with lyrical wisps and arabesques in the solo violin supported by bleak orchestral chords (“Winter”?).  Active life is rejoined in the Allegro Finale, which is all hustle and bustle, with the bass charging forward, echo effects and engaging syncopations in the upper strings, and the soloist showing off fast-note virtuosity.

Watch how Bach adds to the left-hand imitations of the right hand’s scalar motive, to increase the movement’s dynamism.

For this work we’ll listen to two recordings: Fabio Biondi playing the Vivaldi and Richard Egarr performing the Bach.  The Allegro is announced with a group of well-spaced, snappy dotted rhythms open to interpretation — is it a slow introduction (Biondi) or an assertive overture (Egarr)? The same interpretative options are available for the central Larghetto, as witness our two recordings — is it soulfully sad, or is it melancholy yet strongly anchored?  On the harpsichord Egarr’s Finale is a bold burst of sound, replete with bounding chords and improvised trills; with Biondi’s orchestra, it is a spritely, dance-like dash-to-the-finish, with quick minor-key inflections.

As Egarr notes, “Bach added an interesting part for the left hand in the third movement, and in the first movement he fitted a whole string orchestra onto one harpsichord, while also making the music more appropriate for keyboard.” For a demonstration of how Bach did this, see Richard Egarr’s chat at:
https://www.youtube.com/watch?v=DWYCEqH3RfE&t=os

The chipper ritornello Allegro, with its bouncing repeated notes, is always welcome on each reappearance.  The solo violin appears with a bit of the opening motive in sequence before weaving its own extensions of fancy fiddle-work, specializing in showy cross-string playing.  The Largo features contemplative dueting between soloist and first violin, often in stepwise sequences, ending in warm, secure cadences. In The English Concert’s interpretation the ritornello of the Allegro final has a galloping feeling, setting off the soloist’s rapid-fire displays of virtuosity. Yet, all ends quietly.

Bach: Performed by Robert Hill on a harpsichord built by his brother, Keith Hill, with a scanning score that allows you to see, as well as hear, the step dynamics in the tutti sections using the two keyboards, the brilliant passage-work in the solo sections, as well as how a fine harpsichordist ornaments the melodic lines, inserts poignant hesitations (especially in the Largo), and employs a wonderful variety of arpeggiation (or rolling) of full chords to create lush “orchestral sounds.” After hearing Vivaldi’s original Finale, you’ll be amazed at the incredible arrays of left-hand passage-work that Bach adds to drive the movement forward at a manic pace. You’ll need to take some deep breaths after the roiling, then crashing climax!  In Bach’s hands (and Hill’s performance) Vivaldi’s quiet closing takes on a certain nobility of accomplishment.
https://www.youtube.com/watch?v=xL0LLFcJENg

During his years in Weimar, Bach also transcribed two of Vivaldi’s double violin concertos for the solo organ. We shall explore these works next week.