One of the very special historical instruments in our collection at the Skagit Early Keyboard Museum (SEKM) is a re-creation of a late Baroque Lautenwerck, built by Stephen Sørli of Amherst, MA. Everyone who hears it is thoroughly enchanted by its intensely sweet and intimate sound. (The following essay is adapted from “The Baroque LUTE-HARPSICHORD: A Forgotten Instrument,” http://www.baroquemusic.org/barluthp.html.) 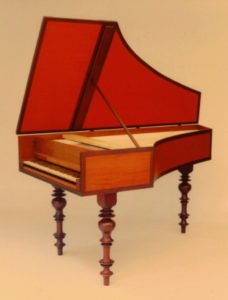 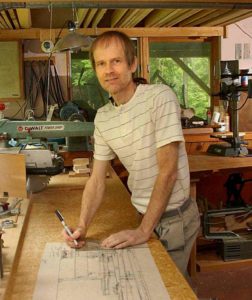 Over the period from the mid-15th century to the mid-18th century, many references were made to gut-strung instruments called Lautenwerke that resembled the harpsichord, but imitated the delicate, soft timbre of the lute, including its lower-sounding variants, the theorbo and chitarrone]. Unfortunately, there is little concrete information about these instruments. Not a single Lautenwerck has survived, nor is any contemporary depiction known, apart from a rough engraving from the early 16th century. Fewer than ten Lautenwerck makers are known by name, and only two or three of them left us reasonably detailed descriptions of their instruments. Nonetheless, the instrument is mentioned fairly frequently in music books of the early 17th to the mid-18th centuries. 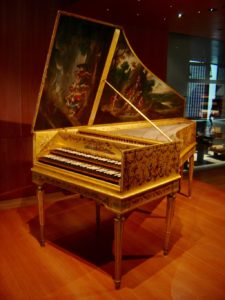 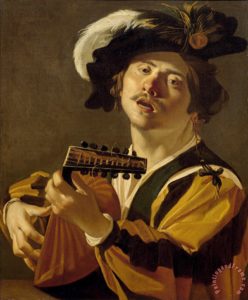 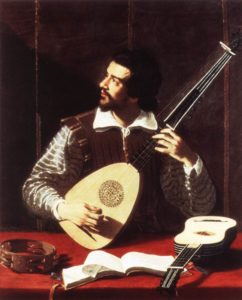 Johann Sebastian Bach’s second cousin, Johann Nicolaus Bach, was a composer, organist, and instrument maker in the German city of Jena. He built several kinds of Lautenwercke. The basic type closely resembled a small wing-shaped, one-manual harpsichord of the usual kind (like our Lautenwerck). It only had a single stop, but this sounded a pair of strings tuned an octave apart in the lower third of the compass and in unison in the middle third, to approximate as far as possible the impression given by a lute. The instrument had no metal strings at all.

According to contemporary accounts, even this simplest of versions made a sound that could deceive a professional lutenist – a fact considered almost miraculous at the time. But a basic shortcoming was the absence of dynamic expression, and to remedy matters Johann Nicolaus Bach also made instruments with two and three manuals, whose keys sounded the same strings but with different quills and at different points of the string, thus providing two or three grades of dynamic and color. Furthermore, he built theorbo-harpsichords with a compass extending down an extra octave.

The interest of Johann Sebastian Bach in the Lautenwerck was considerable. He likely valued the combination of softness with strength that these instruments can produce, and he is known to have drawn up his own specifications for such an instrument to be made for him by the organ builder Zacharias Hildebrandt. 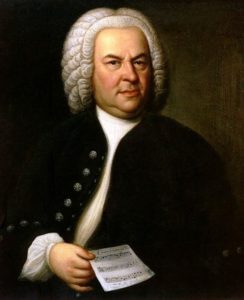 In an annotation to Jacob Adlung’s Musica mechanica organoedi (Musical Mechanics for the Organist, 1726; published in 1768) Johann Friedrich Agricola described a Lautenwerck that belonged to Bach:

The editor of these notes remembers having seen and heard a “Lautenclavicymbel” in Leipzig in about 1740, designed by Herr Johann Sebastian Bach and made by Herr Zacharias Hildebrandt, which was smaller in size than a normal harpsichord but in all other respects similar. It had two choirs [or sets] of gut strings, and a so-called little octave of brass strings. It is true that in its normal setting (that is, when only one stop was drawn) it sounded more like a theorbo than a lute. But if one drew the lute-stop (such as is found on a harpsichord) together with the cornet stop [perhaps an undamped 4’ brass stop], one could almost deceive professional lutenists.

The inventory of Bach’s possessions made at the time of his death reveals that he owned two such instruments, as well as three harpsichords, one lute, and a spinet.

The use of gut strings is of primary importance in a Lautenwerck. However, simple replacement of metal strings with gut will not give satisfactory results. The lower pitched strings of the Lautenwerck are thicker and under less tension. Thus Lautenwercke are often smaller than their metal-strung cousins. Extreme shortening of the strings, in comparison to the harpsichord, reduces the tension a Lautenwerck must bear. Lighter construction is thereby made possible, enabling a Lautenwerck to respond better to the less energetic gut string. This is especially true of the soundboard, which can be half the thickness normally found in harpsichords.

As gut strings have more internal friction than their metal counterparts, they generally sustain less. This allows one to dispense with dampers to a large degree. Individual instruments will dictate where dampers are needed (and how effective they need be), but one rarely finds Lautenwercke fitted with dampers on every string. Any resulting “over-ring” enhances the lute-like effect. (Our Lautenwerck has dampers from middle C on down.)

One final difference: Harpsichords normally have one jack per string. Lautenwercke often have more than one jack independently serving the same string. Tonal variation is achieved by plucking the string at different points along its length. That is the case with our Lautenwerck.

Our first two selections are Andrus Madsen playing an Adagio and a Fugue of his own composition on our Lautenwerck:

Next, let us listen to Kim Heindel playing the Prelude, Fugue, and Allegro in E-flat major, BWV 998, which J. S. Bach composed around 1735 for lute or harpsichord.

The Hungarian luthier Romanek Tihameìr has experimented with building a double-manual Lautenwerke with large lute-shaped cases. On one of his instruments Gergely Sárközy, who performs on guitar, lute, lute-harpsichord, viola bastarda, and organ, has recorded Bach’s Suites in E minor and C minor, BWV 996 and 997, as well as three chorales. Here is the E-minor Suite: 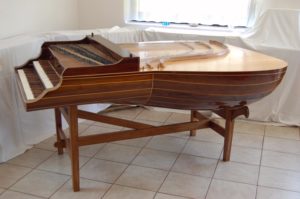 For a highly nuanced interpretation of BWV 997, I would recommend the recording by the American harpsichordist Robert Hill, playing on a Lautenwerck built by his brother Keith Hill of Brentwood, Tennessee:

Praeludio – Fuga – Sarabande – Gigue – Double (a variation in the Gigue)

[Scroll down for program notes about the movements of this piece and the artist.]

Of this instrument Robert Hill writes,

It is a single manual instrument that has a special panel mechanism for moving the single 8′ set of jacks toward and away from the player, in imitation of what happens when a lutenist changes the position of his or her right hand from the middle of the string to plucking close to the nut, which changes the timbre from flutey to nasal, from dark to bright . . . however you want to call it. I also wanted to make the sound as much like a lute sound as possible. To me it sounds like a Lautenwerk should . . . very lute-like but clearly not a lute . . . cool sounding, yet neither cold nor dull, but spritely, sweetly singing, even though the gut strings are far more attenuated than the metal strings of a harpsichord. The sound sample below demonstrates how the timbre-changing pedal mechanism allows the color to be different on repeats without resorting to another keyboard to do the same thing.

http://keithhillharpsichords.com/lautenwerks
(scroll about halfway down the page to ABOUT MY LAUTENWERKS,
and listen to the first sound sample)

For further exploration of the eight Lautenwercke that Hill has built, with illuminating sound samples, continue on down his webpage.