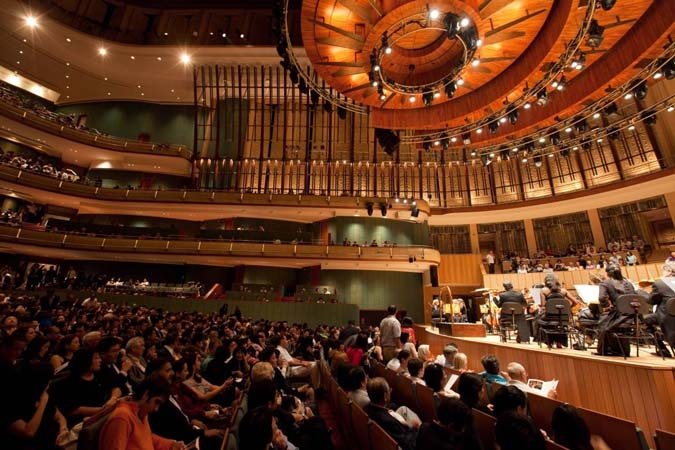 It’s me, your old friend and patron: Thrifty Concert-goer. It seems that we’re all finally making our way back to live music. I didn’t know how much I had missed you until I was there, cradled in your shapely seams. Did you miss me too?

On Sunday, I sat in your J-th row during Ray Chen’s Tchaikovsky violin concerto. It was so exciting to sit (almost literally) at the feet of such an accomplished performer! Thank you for allowing me to afford the concert, thanks to your lower Sunday matinee pricing. Thanks to the two of you, I was close enough to see Chen’s bow hairs break in the crest of the cadenza, and all for just 38 dollars plus tax.

I know that the fancy critics online call you “whiplash seats” on account of the neck-craning required by the acute angle of sight from the seat to the stage. I suppose that’s partly why you’re so affordable. Don’t let those names bother you. So what if my eyes are level with the orchestra’s shoes? Noah Geller, who is one of the concertmasters of the Seattle Symphony, works very hard to keep his shoes nice and clean. His black loafers are shinier than a fish’s eye. One must imagine that he cleans them at least every other hour, or else levitates gently from room to room to preserve their unimpeachable shine. Who but we in the Orchestra Front seats will appreciate all his effort?

Then, there is the music. Well…I wouldn’t say the quality of the music from your rows was worse exactly. It was different. It was bigger, in a raucous sort of way. I could hear the musicians really dig in, sometimes making an unpleasant sort of crunch or whistle: the kind of sound that loses its teeth in the expensive parts of the concert hall. Everyone in the hall could see the orchestra swaying with passion, but I could hear their coat arms swish against their sides to prepare for an entrance. Only I could hear the nearly imperceptible scatter of an offbeat that they didn’t quite nail.

That’s right. Only we in those orchestra front seats could see the symphony’s exquisite descent from apotheosis. On closer inspection, the distanced, effortless perfection they postured for the N-th row unravels into a tense set of a million concurrent, lightspeed techniques —  Sweat, nerves, the straining flesh of a cellist’s knee against her chair. It’s kind of incredible.

Eduardo Rios, the other concertmaster, rarely looks at the conductor, opting instead to spend his attention on his stand partner’s bow and hands. His eyes have flicked this way and that in less than a bar, and at the end of it, he hasn’t missed a beat. In this way, the two partners become one, and in this way, the multitude becomes singular — Everyone in the hall can see them, but only we in the front know how they are casting that magic.

Down there, at the front, we are so close to the ground. We’re lower than every other seat in the hall, lower than the main attraction even. We are so far down, that the air is thinner, and we ourselves are smaller, smaller, smaller. Then we’re gone — ourselves, becoming part of that singular sound. We are so close to the ground, and yet we have never been closer to the music. I think that this is how a priest must feel when he is on his knees, in communion with God. Down there, we all hold our breath, and we lean forward just at the edge of all that delicious movement, and we pray with our eyes open.

I love the music, of course, but I could hear it anywhere. The real reason I go to live concerts is the drama. This is your true value, why I always book you: you are the only seats in the house where it all seems just close enough to touch, like the last dream of the night— the one that wakes you up.

Here is the first movement of one of my all time favorites in violin repertoire — the Tchaikovsky Violin Concerto. This recording is played by Ray Chen, who really luxuriates in the first few notes of the solo. Keep an ear open for that drama!